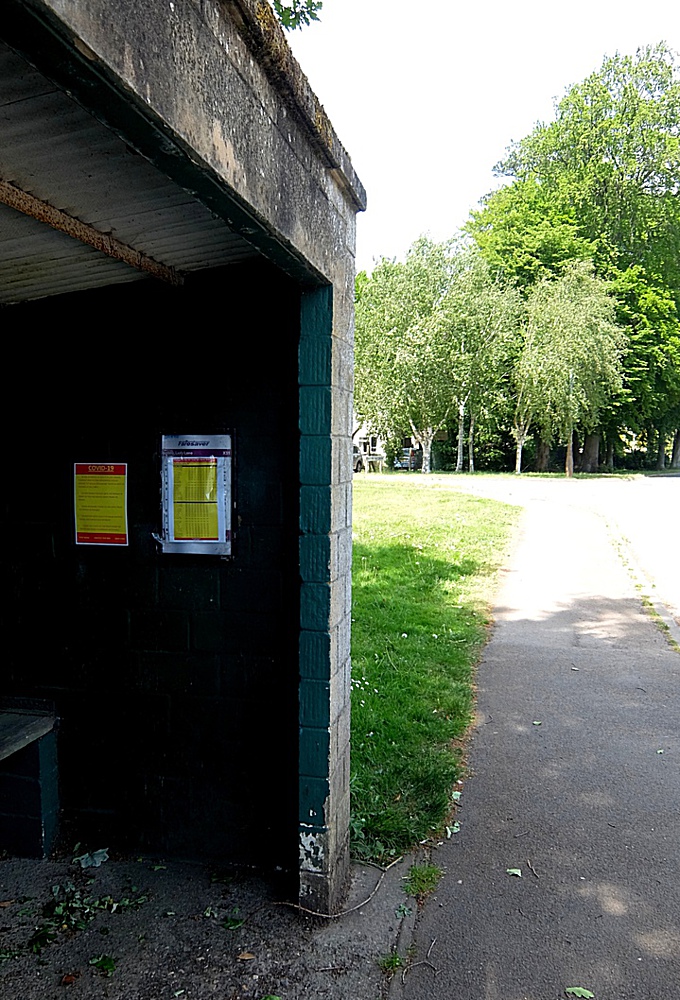 The ubiquitous Covid-19 notice in the dark interior of a Leafy Lane bus shelter. As with many walks, we start this one (on 24th May 2020) in Leafy Lane Wood as it's such a wondrous place (don't take my word for it - read Bruce Armstrong's description here The wonders of Leafy Lane Wood where he says, inter alia, "The whole place was magical to me"). While much of Bruce's wood was removed to enable the building of the RAF officers 'quarters', Park Avenue, what remains now is equally magical for the people of Rudloe. Yet ... yet, there are those within the Leafy Lane Playing Field (LLPF) organisation (and apostles also apparently), who are not Rudloeites and do not have the best interests of the people of Rudloe at heart, who would have denied access to this most precious piece of local woodland - see the following notice (photo of) from LLPF which states 'Due to Covid-19 Restrictions Leafy Lane Playing Fields is closed' (we'll forget the English for the moment). If ... if LLPF had been successful in denying access to the wood firstly through its representation to Wiltshire Council on locals' bid to have the wood declared an 'asset of community value' (the LLPF representation on this was a most obnoxious tirade of abuse - see the pdf file 'Representations from Leafy Lane Playing ...' at the foot of the 26th July 2015 article here 26th July 2015 article) and if LLPF had been successful in opposing the long campaign by locals to have the footpaths through the wood declared public rights of way, then not only would the playing fields be closed but the woodland also would have been closed, thus denying locals access to their only green space (having said that, it was always 'their' position, given voice in their representations, that local people should not have access to the woodland).

I shouldn't, but I will, fall back to the vernacular here ... 'Who the hell do these people think they are?'. Box (where the principals in this matter reside) has its 'Rec', Corsham has its 'Rec' and Park, even Box Hill and Hudswell have their 'Commons', yet these people by dint of 'ownership' would deny (and would have denied in the case of the woodland) access to local playing fields (which 'ownership' was enabled, in part, through a £75,000 grant of ratepayers' money from the old North Wilts District Council). The latest (25th May) is that, apparently, the 'lords of the manor' (LLPF) have decided that the playing fields can now be opened to people behaving responsibly ... 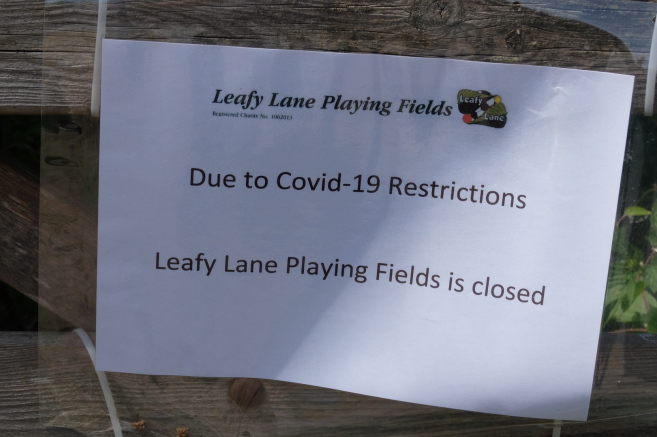 A gallery of photos follows - to view these 'full page' (the better option) click on the icon with outward-pointing arrows at the foot of the gallery.

I've started to compile this webpage on Bank Holiday Monday, 25th May 2020, between sessions of sunlounging, reading, eating, drinking (ale) and listening to sounds which are normally obscured by, inter alia, traffic noise (hardly any today), ambulance sirens (no emergencies today?), reversing beepers from the Bellway Dickens Gate development (none at the moment) and the electronic machinery of Herr Obsessive Compulsive in the garden behind (just staccato bursts today). And what a delight - I could even hear the marvellous singing of a neighbour (from Highlands Close) who is a member of Chippenham Male Voice Choir - this reminded me of walking in quiet alleyways on Sunday afternoons in Italy when all that could be heard from apartment windows was lunch-time chatter and the clanking of pots in sinks. I write too soon - rather longer staccato bursts (from what sounds like the high-pitched whine of a surface planer) from Herr OCD bring this paragraph to a close. Now back to the walk ...

We continue at the northern end of Leafy Lane at the closed gates of The Sheiling (whose address is Pine Close rather than Leafy Lane), the former home of Peter (who was a fine athlete in his younger days) and Maureen Robinson who both passed on in 2018. A tragedy came their way thirty years earlier when son Paul, then aged 31, died following an accident. Strange that our paths never crossed in the 40-odd years of living at opposite ends of Leafy Lane. Anyway, a once vibrant family home is all closed up now. 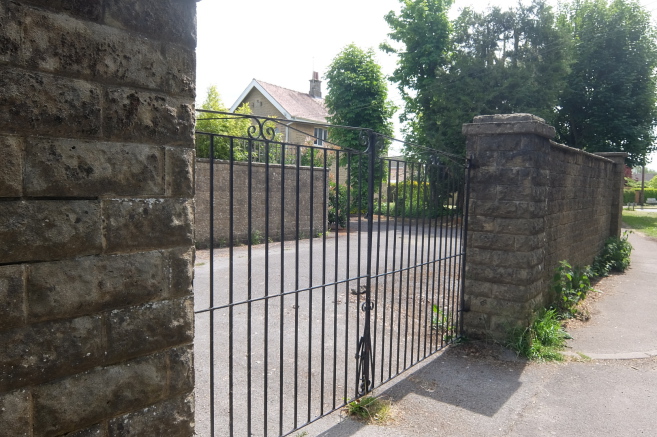 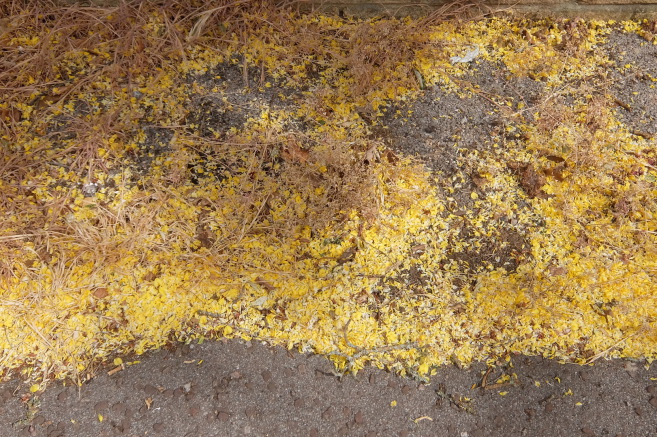 Laburnum blossom in Trenchard Avenue. There was a recent Corsham planning application for the felling of a laburnum because its seeds were poisonous! But many plants are poisonous in some way (seeds, leaves, flowers).

Now another gallery, this one of Rudloe Green and its trees. The GreenSquare organisation proposes (one of two options anyway) to build on the Green which has been an integral part of the life of the Estate for generations. 'Soil investigations' will be undertaken on Thursday, 28th May 2020, to determine (I would suppose) the suitability of the Green for building. This proposition is, of course, outrageous not only because of the Green's history but because of Wiltshire Council's designation of the Green as 'public open space' and the assertion by 104 local people in 2018 that the Green has been and is an important part of their lives and the lives of their children. 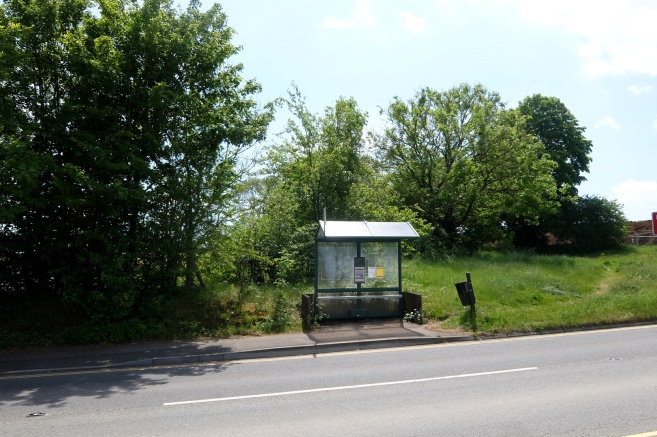 Moving off the estate now, we find a Covid notice on the Bradford Road bus shelter as we head towards Skynet Drive 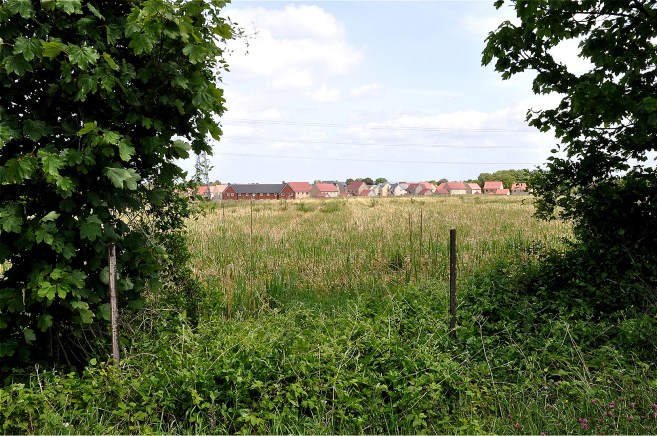 In Skynet Drive looking towards the new Redcliffe estate. Does that look like the edge of a typical Cotswold town to you? 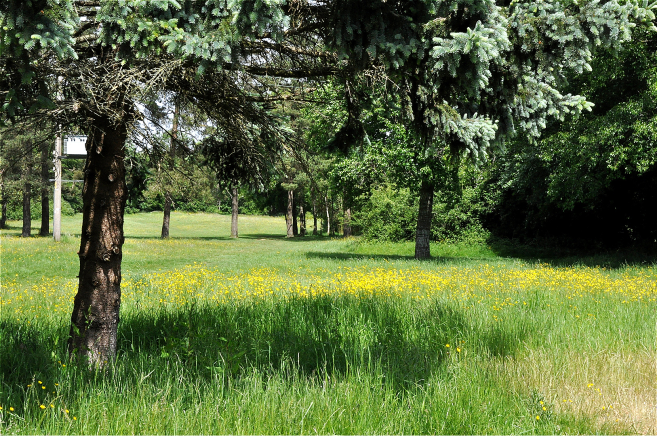 Decision-making on the hoof, we are now headed to Moor Park via Hudswell. This is Hudswell 'Common', owned by the MoD. 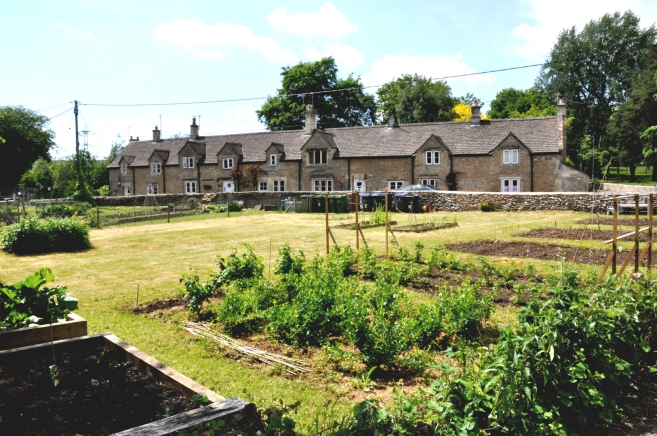 Very neat (is that a good thing?) allotments and Hudswell cottages in St Barbara's Road 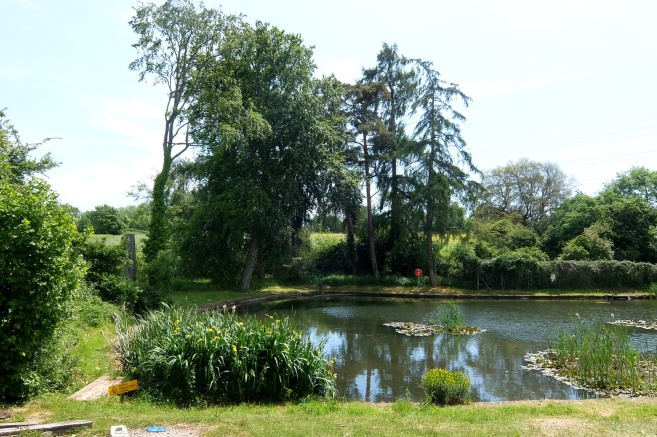 The small lake below Hudswell, on MoD land, which is one of the sources of the Ladbrook. The course of the streams leading to the Batters and the Ladbrook remains a mystery (to me) as the map below might elucidate.

If you click on the map to expand it  you may (may!) see that the stream which comes from our lake (to the left, or west, of the railway cutting) heads towards Corsham, crosses the railway (in an aqueduct) then disappears below ground (into a culvert). It then reappears in the area of the Great Western (pub) and somehow manages to cross the railway again to get to the Batters. But there is no aqueduct here - I need a guided tour from an expert. 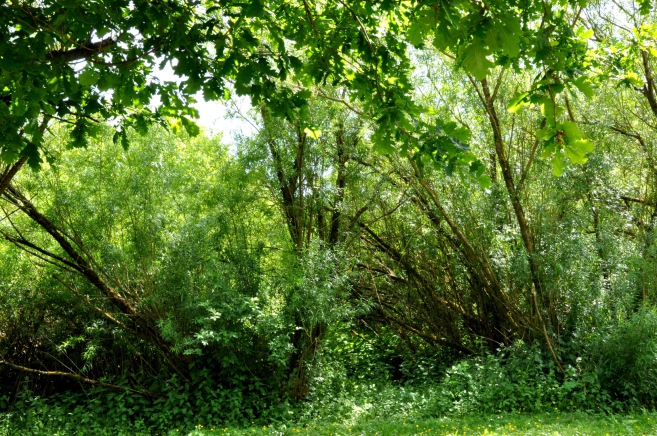 Headed towards Spring Lane (the source of the water!), coppiced willows near the Hudswell byway 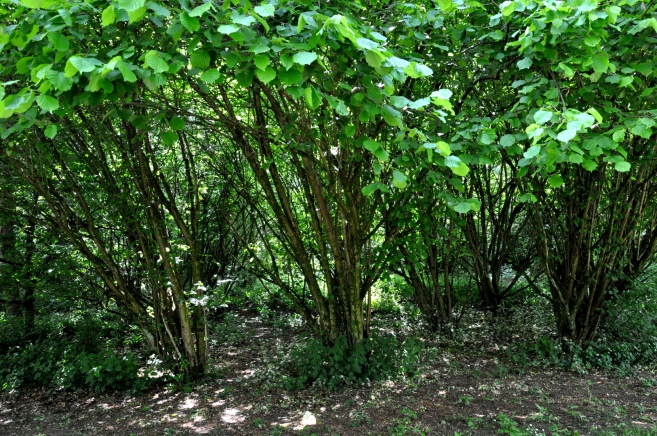 And now, coppiced hazel adjacent to the byway 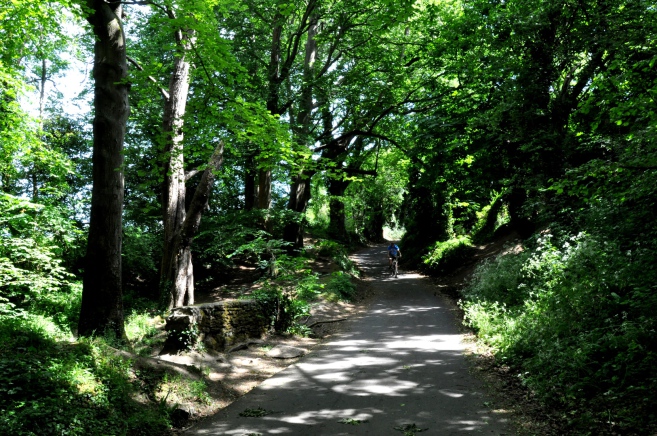 In the depths of Spring Lane; cyclist charging down the hill 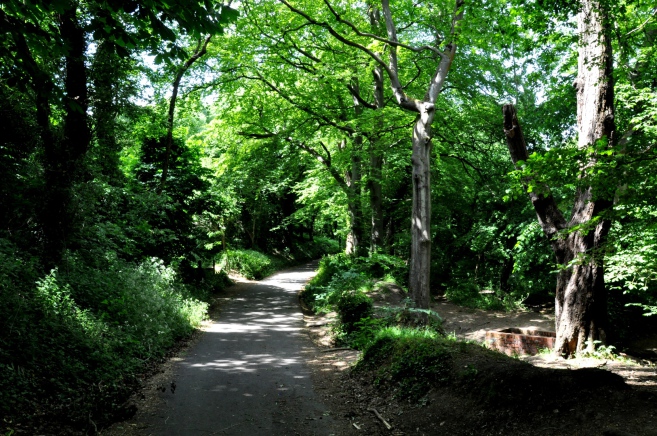 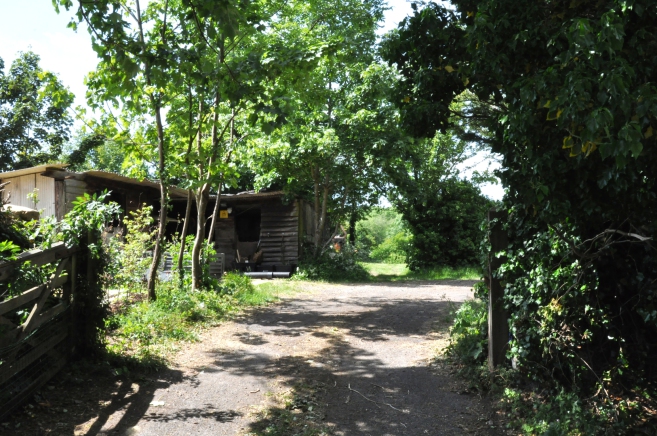 This was Jeanne and John Doohan's stable, at the Westwells end of Spring Lane. Back in the 80s, much time was spent here with Poppy the Shetland pony, Herbie the naughty grey, Tonto and others 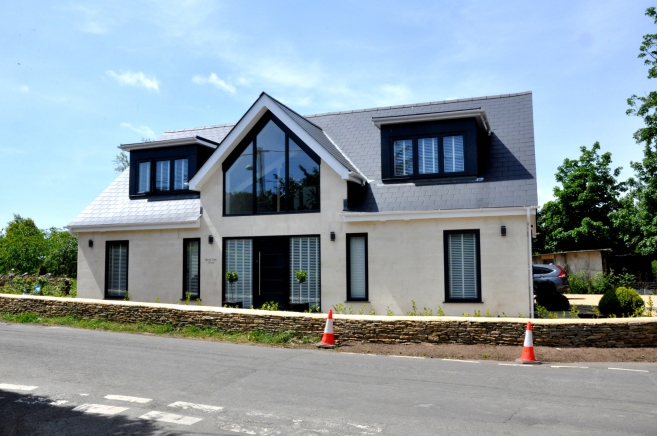 Talking of typical Cotswold architecture earlier, how on earth did this out-of-place monstrosity at Westwells/Greenhill receive planning permission? But not only that, the owner/builder has applied for another one next door. 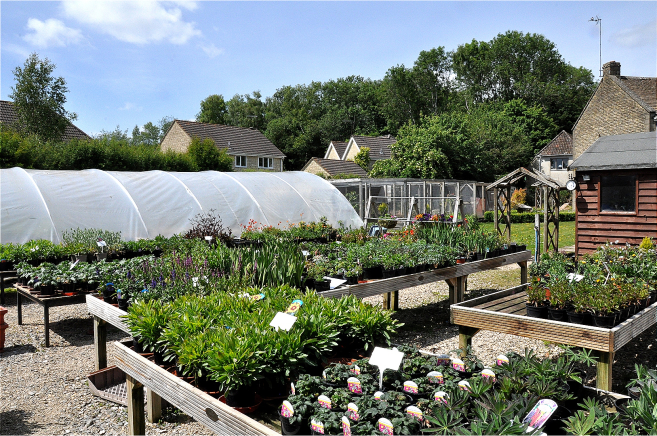 This was the modest target of today's venture, the small (but expensive!) market garden at Moor Green