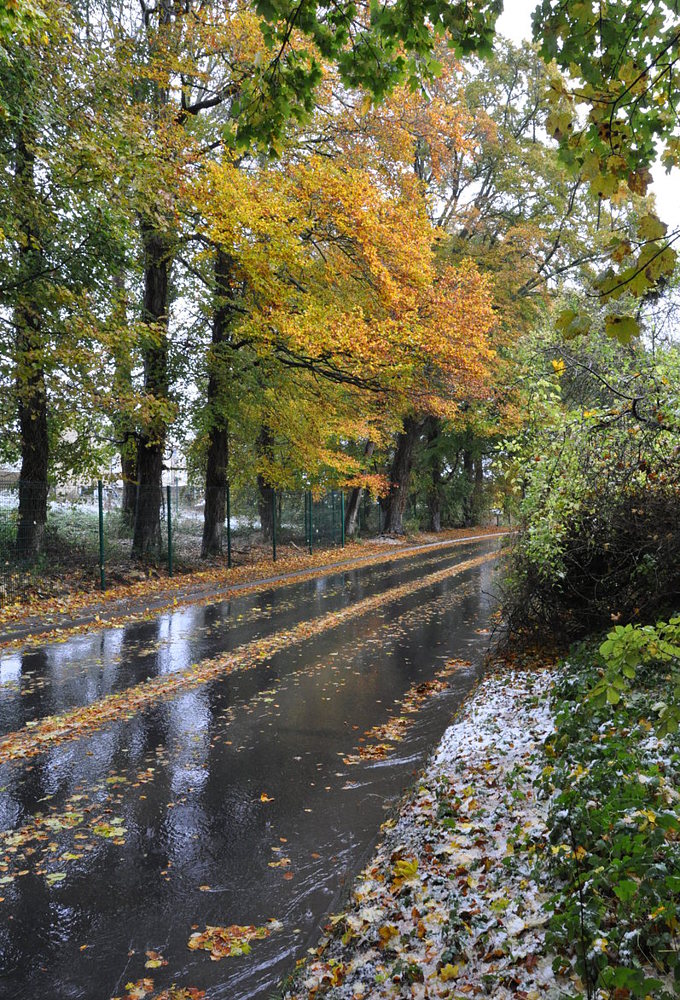 The Bradford Road at Rudloe has turned into a river after heavy snow. 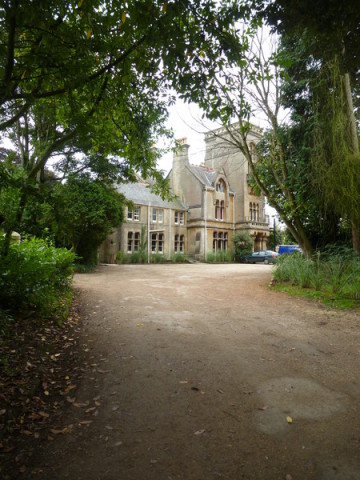 The history of the present Rudloe estates is a fairly recent one. The estates were built in the 1960s and 70s following the demolition of the prefab estates at Rudloe, Boxfields (Box Fields) and Thorneypits (Thorny Pits). Interestingly, I just learned from Terry Bishop (August 2013), that the Boxfields prefabs (at least) were dumped lock, stock and barrel into the open caste quarries at Boxfields in the 1960s. The prefab estates and "massive hostel sites" as they are called in the academic 'Joint Support Unit (Basil Hill) Characterisation Study' (2008) by Oxford Archaeology ('link' shown below), commissioned by English Heritage, housed the (immigrant) workforce (and their families) of the mainly underground industries (CDCN, CAD, BAC, BSA, Dowty, Parnall etc) during WWII. After the war, the quarries at Copenacre (Hartham), Spring Quarry and Monks Park were used by the MoD Navy Department for storage, testing etc of naval electronic equipment and many of the war industry workers shifted here (see Nick McCamley's 'Secret Underground Cities' for a wealth of information about the local quarries and their uses and this website for lists and descriptions of all the area's mines and quarries: http://www.choghole.co.uk/LOCATIONS.htm and also David Pollard's article at the 'Box People and Places' website here: http://www.boxpeopleandplaces.co.uk/box-quarries.html). Much of the immigrant workforce was Irish, many from the Cork area, as evidenced by the names of the estates' residents: Murphy, O'Shea, O'Brian, Feeney, Lynch, Ryan, Riley, Kelly, Cafferty, McCombe and so on. At Boxfields, the prefabs were of two types: pitch-roofed on the south side of Boxfields Road and flat-roofed on the north side (see 'Archive', 'Boxfields' for pictures and maps of the estates). The school for the estates' children, known as 'Box Highlands', was in, what is now, White Ennox Lane and survived until 1984 (pictures of the school can be found in the 'Archive', 'Rudloe' pages of this website). The 'Oxford Archaeology' link is referenced above is: http://corsham.thehumanjourney.net/pdfs/CORSHAM_report.pdf

The 1840 Box Tithe Map shows a settlement called Rudloe to the east side of Lower Rudloe Lane at the bend where the by-way to Widdenham diverges (see map below - the jagged blue-tinted line is the parish boundary). In the 1900 Ordnance Survey (OS) map, also reproduced below, this settlement is shown as Rudloe Farm with an area of woodland called Randell's Garden further along the lane. Beyond this the cottages now known as No Notion are identified as Weavern Cottages. The 1900 Inland Revenue Valuation Sheets show Rudloe as the area at the brow of Box Hill.

Rudloe Towers, since known as Rudloe Park Hotel, Rudloe Hall Hotel and now (September 2013), courtesy of Marco Pierre White, Rudloe Arms is a grade II listed building and was shown in the 1889 OS map as Rudloe College not Rudloe Towers. Rudloe Towers was built in 1875 for the Pictors, local quarry owners, by J Hicks of Redruth - see http://www.britishlistedbuildings.co.uk/en-317078-rudloe-park-hotel-box- - this webpage contains many architectural details of the house. The Pictors wanted to emulate the Corsham Methuens by building a grand house 'above' Corsham. According to a Wilts County Council webpage at http://history.wiltshire.gov.uk/community/getschool.php?id=770 the principal of Rudloe College was Rev. Mathias. Quite how Rudloe Towers became Rudloe College for a period needs further research as, moving on to the 1900 OS map, the house was, once again, called Rudloe Towers.

The 1900 OS map also shows Brewer's Yard at Rudloe Firs in the woodland (where the water tower now is) on the brow of Box Hill. Brewer's Yard was a small oolitic limestone mine. Its unique feature was that it was on two levels (one above the other) connected by stone stairs with a slide to the lower level. According to Wikimapia at http://wikimapia.org/13220712/Brewers-Yard-Quarry it was an interesting, yet strange, little mine with a huge shaft right down the middle and a smaller one just to level 1. It was also known as Brewer's Quarry and was owned by William Jones Brewer who had also excavated shafts (including the Cathedral) and quarries at Boxfields in the 1820s/30s/40s. Along with Mr T Lewis, he had gained a contract for the excavation of a troublesome (because of ingress of water) part of Box Tunnel. William Brewer died in February 1857; Brewer's Yard Quarry was not worked between 1864 and 1889, it was then worked by Marsh, Son & Gibbs Ltd up to and including 1906 but has not been worked since. Adjacent to Rudloe Firs/Brewer's Yard, a tree-lined lane called Long Belt curved along the escarpment edge to Pickwick Lodge.

Rudloe House in Leafy Lane is shown on all OS maps. The house and associated parkland (hence Rudloe Park which some still use as part of the postal address) was owned, at the time of its sale in the late 1960s, by Mr Padfield of Park Farm, Kelston (see http://parkfarm.co.uk/about-2/) who also owned the fields to the west of Leafy Lane that are now Leafy Lane Playing Fields. According to 'old' Rudloe residents, the parkland had many fine trees including a Wellingtonia; apparently our garden contained, appropriately, a walnut tree. Mrs Wooster, who lived at Rudloe House in the 1980s/90s, had a great interest in wildlife and compiled lists of wildlife in Rudloe and Boxfields; these lists can be seen on the 'Localities', 'Rudloe'. 'Leafy Lane flora/fauna' page here Leafy Lane flora/fauna.

And, rather strange to say the least, Rudloe Manor is not shown on any map mentioned above in spite of the fact that it was built in the late 17th-century. The link at 'British Listed Buildings': http://www.britishlistedbuildings.co.uk/en-317074-rudloe-manor-box- states that a manor was recorded from the early 13th-century and the house, which has been grade II listed since 1985, was built in about 1685 for a T. Goddard.

Interestingly, the Heritage Statement commissioned by Hannick Homes for their speculative development south of the Bradford Road at Rudloe in late 2013 includes the following: "The village of Rudloe, referred to as ‘Riglega’ in AD1167 (Gover 1963), is possibly of Anglo-Saxon origin but is more likely to have been founded as a daughter settlement of Corsham." Bit of a non-sequitur in that statement but at least we appear to know now where Rudloe originates. All we need to find now is the origin of Riglega.

Having started down this road of the origin of the name, 'The Place Names of Wiltshire' (Gover, Mawer & Stenton, first published 1939) has the following to say about the development of the name Rudloe:

"There can be little doubt that this is a compound of OE hrycg and hlaw. Hence 'ridge hill or barrow'. It lies on a well-marked ridge. The sound group [dzl]  was simplified to [dl]. For the survival of the Middle English u-sound cf." (Yes I know, it's Greek to me too) 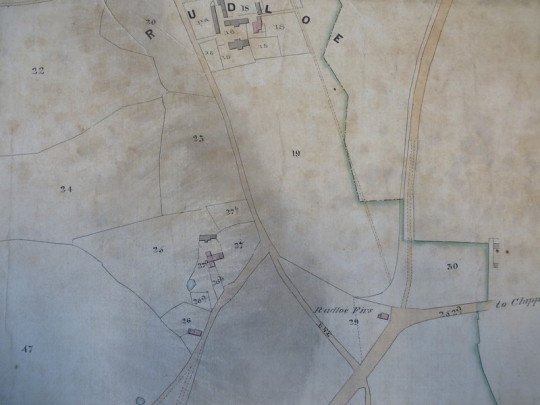 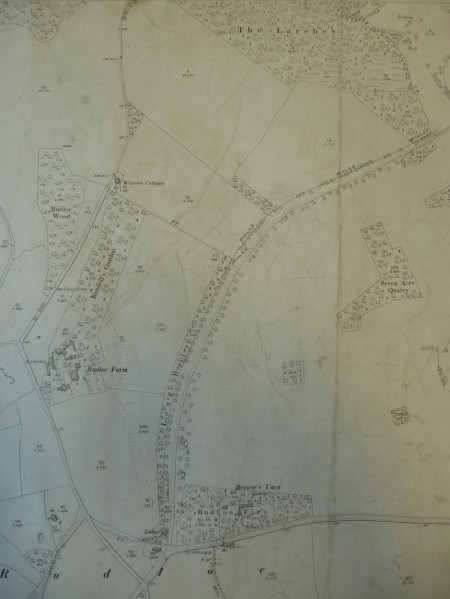 A wider view of the area's community history may be found on the Wiltshire Council website here:

The following files, from the archive of Jean and Philip Wooster, give a history of both Rudloe House and the Pictor family who built Rudloe Towers (since known as Rudloe College, Rudloe Park Hotel, Rudloe Hall Hotel and Rudloe Arms).

The Pictors of Box and Rudloe.docx
Microsoft Word document [2.7 MB] 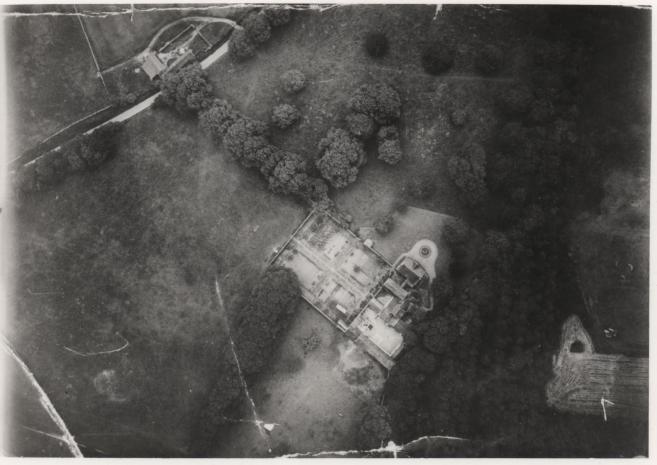 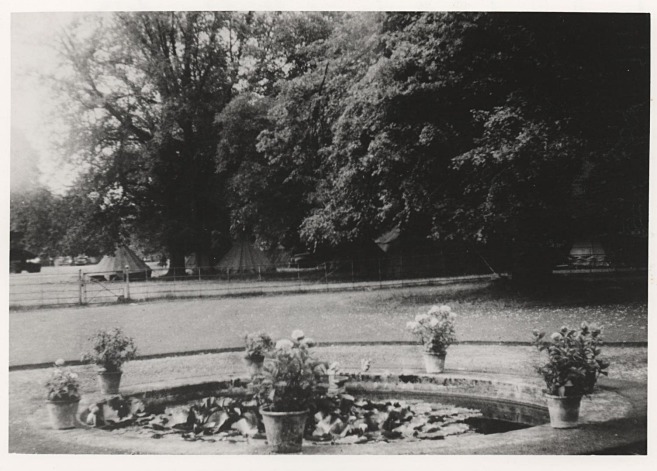 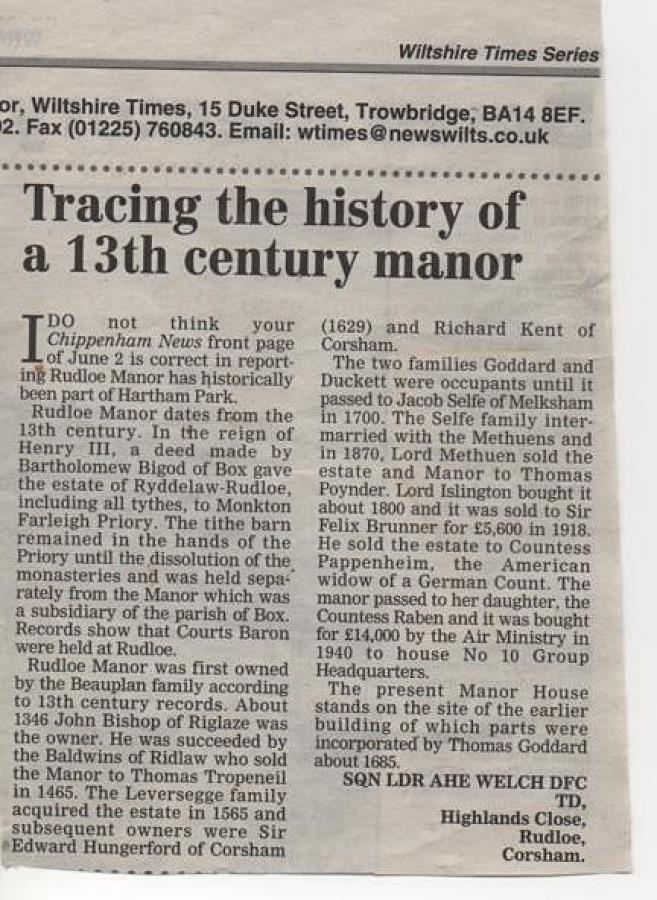