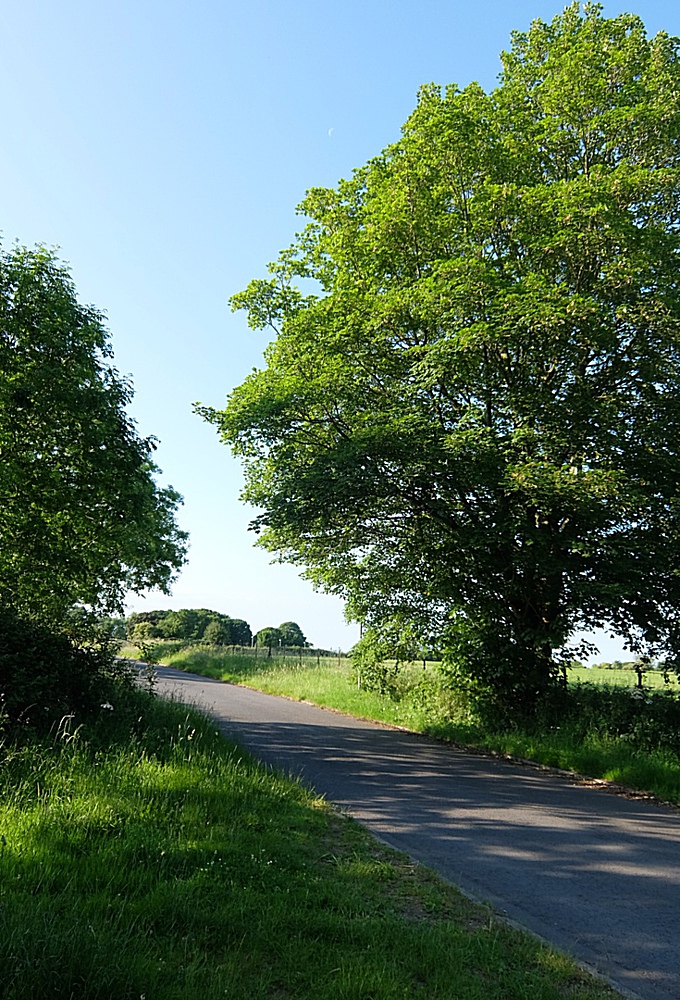 Views of trees (maple, ash) and the rural setting of Skynet Drive on 18th June 2017

Elsewhere on this site (e.g.in Pickwick 'News'), "lies" are discussed. Grand lies that come to permeate our lives. One example is the need for our nuclear deterrent. This is absolute nonsense - 'we' spent years trying to find weapons of mass destruction in Iraq - we needn't have gone so far, they may be found in Scotland (a good read on this subject is The Truth About Trident by Timmon Milne Wallis). Another lie is the desperate need for housing. Again discussed elsewhere on this site, but 'we' don't have a need for housing. The supposed requirement has come about through our goverments' disastrous 'policies' (or lack of them) on both immigration and the purchase of housing (mainly for investment) by foreign nationals. The following extract from a 2013 article, by Mark Easton, for the BBC explains.

"Something quite remarkable happened in London in the first decade of the new millennium. The number of white British people in the capital fell by 620,000 - equivalent to the entire population of Glasgow moving out.

The consequence, as revealed by the latest census, is that white Brits are now in a minority in London, making up just 45% of its residents". There then follows a question ... "So where have they gone to - and why did they leave?"

The answer to the first part of the question is that they departed for the country. Let's look at Corsham. In the last ten years or so, the powers that be (governments, planners) have planned for a population increase of about 15% in Corsham (Katherine Park and other west Corsham developments have/will increase the town's population by about 3,500). But 'we' don't have that order of local population growth. So where are these people coming from? And why are our governments complicit in this lie (answers on a postcard please)?

Developers, of course, are perfectly happy to swallow up swathes of our countryside to the cost of local people, wildlife and productive farming. Pick up any newspaper on any day or listen to or watch the news and you will find this lie repeated. Take today's (22nd June 2017) Times and a letter from the Head of Planning at Carter Jonas Estate Agents "With land in scarce supply, we have only three options to meet the forecast housing need, which in London is estimated to be for an additional 1.5 million dwellings" (that's another 3.5 million people!). One-and-a-half million dwellings for who(m)? With a London population of 8.6 million which now includes 4.7 million "foreigners" (aaaargh, I've used the 'f' word again) who are we building these 1.5 million dwellings for? It must be for speculative investors and Johnny Foreigner as indigenous Londoners have decamped to Essex and elsewhere (including, of course, Corsham with the Redrow, Bellway, Redcliffe, Hannick and other speculative developments).

A midsummer stroll in and around Skynet Drive on a Sunday morning (18th June 2017) still gave a flavour of a peaceful, rural idyll but the greater spotted woodpecker, skylark, swallow, wheatear, dragonfly, bee (of various kinds), wasp, Burnett moth, small heath butterfly, ladybird and hoverfly will soon be a distant memory in the large blackberry patch (as will the patch itself). Pictures follow. 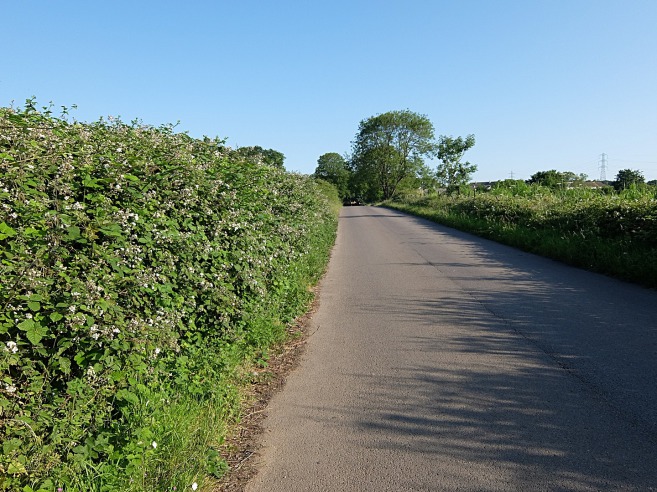 The large blackberry patch in Skynet Drive on 18th June 2017 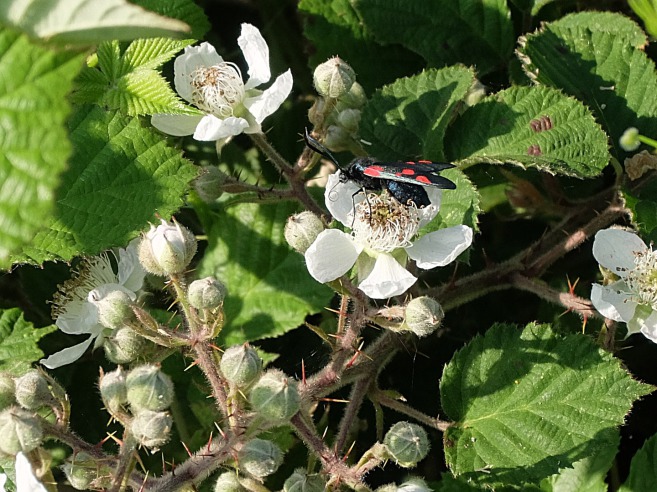 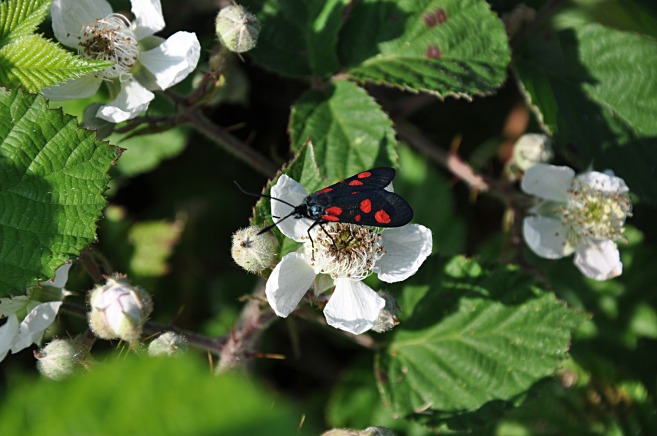 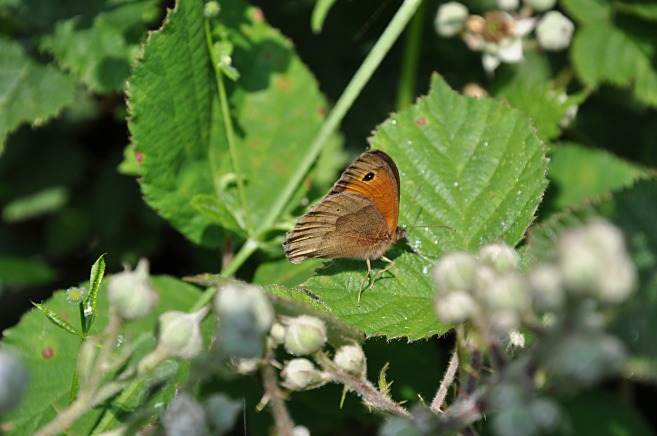 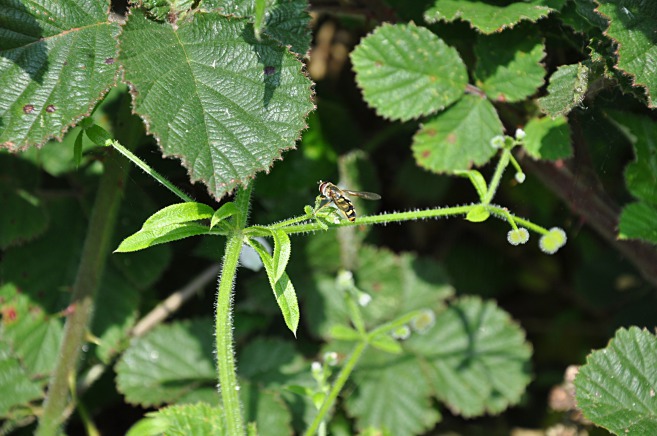 Hoverfly in the Skynet Drive bramble patch on 18th June 2017 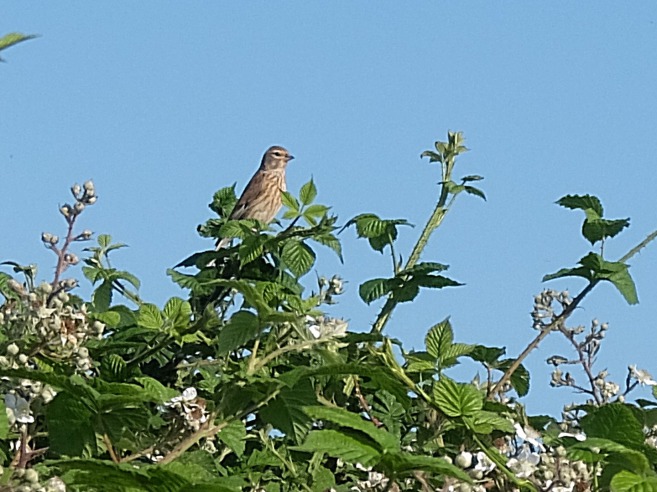 Not sure about this chap and his mates - perhaps a skylark or a corn bunting. Any road up, there was a small flock in the bramble patch. 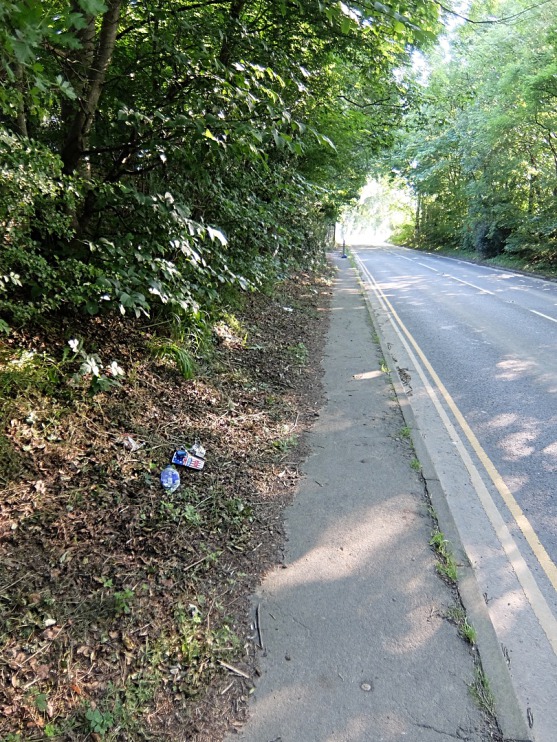 And on the way to Skynet Drive, a picture that perhaps typifies the boorish nature of councils (and developers) - Wiltshire Council has cut back this verge to within an inch of its life - a verge that contained a substantial wild strawberry patch