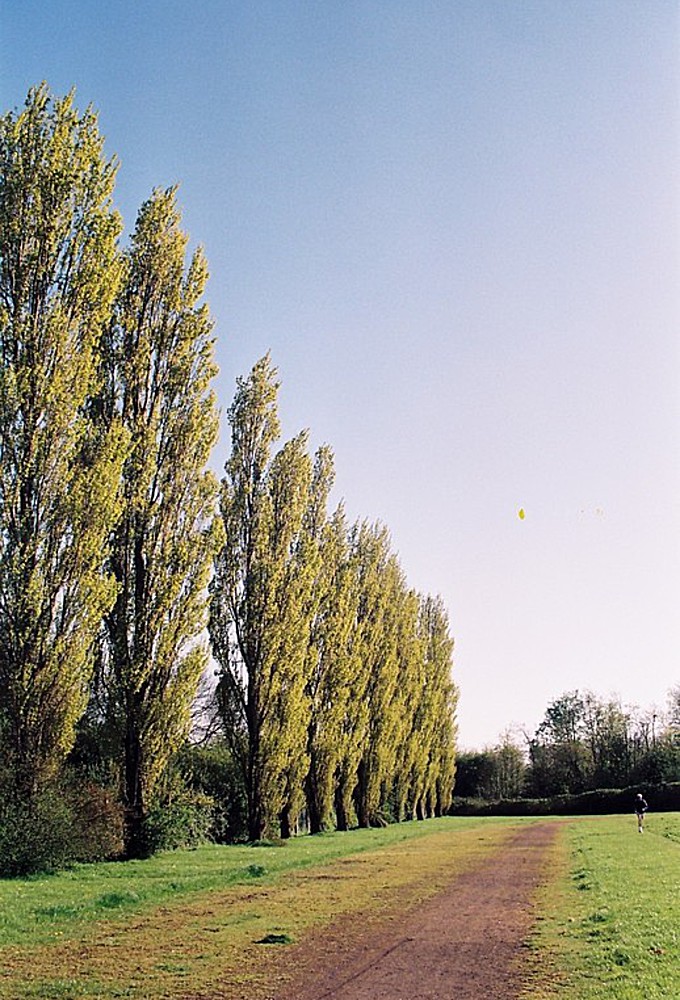 The Sheffield Ground running track in 1998, before Katherine Park was built, with Ken Shackleford ploughing a lonely furrow around the inside of the track

The photos in the gallery at the foot of this webpage were taken on the 'Sheffield Ground' at midsummer 2017. The Sheffield Ground consisted of a sports (football) pitch, 'cinder' running track and substantial pavilion (changing rooms). It was used by the local MoD personnel/teams including the RNSD Copenacre football teams which, at various times, played in the Trowbridge League (Saturday) and Chippenham Sunday League. The team photos in the Archive page here RNSD Copenacre football teams were taken at the Sheffield Ground.

The Sheffield Ground was also used for the RNSD Copenacre annual sports day which was a grand event with guest teams invited from all the other local MoD/military establishments. The 'cinder' track became overgrown, principally with moss, after months of only casual use so quite some time had to be spent on first levelling, then marking for the annual main event. The levelling (which also had the effect of removing the moss) was achieved with much sweat and tears, over many days (by yours truly) with a piece of kit called a trulute.

The sports day 1500 metres race was won year after year by brother-in-law, Patrick (Tick) Murphy, whose stamina was legendary. Following the events, prizes were presented by the Superintendent's wife and it was, of course, 'standard procedure' to present the lady with a bouquent of flowers for her efforts. On one occasion, Ken Garlington was despatched to the local shop/supermarket/garage to buy said flowers and returned with ... a bottle of sherry!

The image below and those in the following gallery are of the programme for the 1977 Copenacre Sports and Social Club Annual Sports Day on 19th June. What memories of people who passed this way once and others who may still be encountered from time to time! Dick Eccleston of Atworth, Vera Wardle of Colerne, Frank Clark and Jack Cullis of Corsham, Alan Berry of Bradford-on-Avon - all no longer with us. I have another programme from an earlier sports day where Bernard Lovell of Box, he of the lilting Welsh tones, was the announcer. Again, Bernard departed life's stage some years ago. And Patrick (Tick) Murphy, mentioned above, succumbed to a cardiac arrest on 5th July 2017. Ken Newlands, shown as the winner of the 100 metres veterans in 1975, was still playing football for the RNSD Copenacre team in the Chippenham Sunday League at the age of 53 (at least) - see the first photograph of RNSD Copenacre football teams here: RNSD Copenacre football teams. 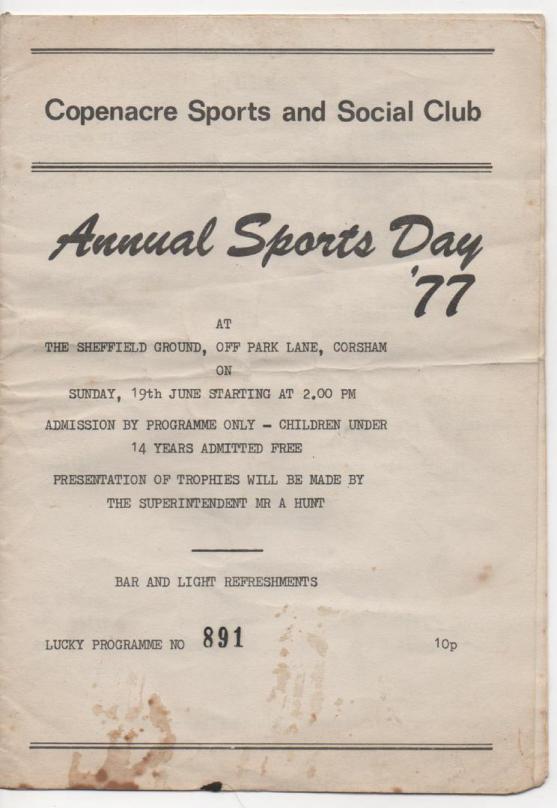 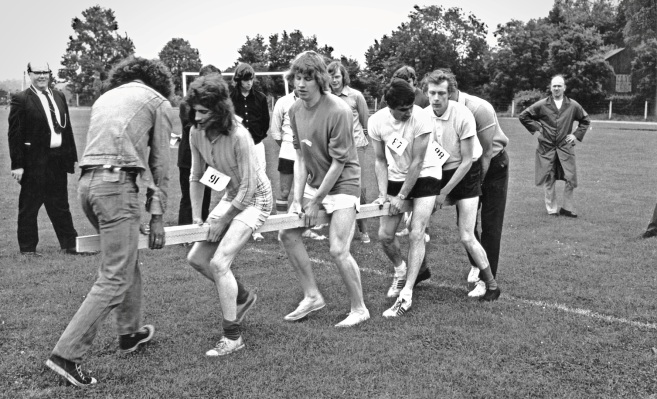 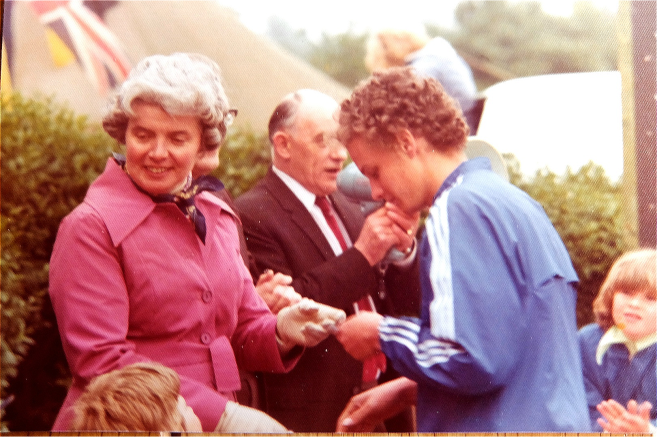 Pete Ralph receiving his winners medal(s) (plural no doubt) from the superintendent's wife, Mrs Hunt, who has yet to receive her bottle of sherry 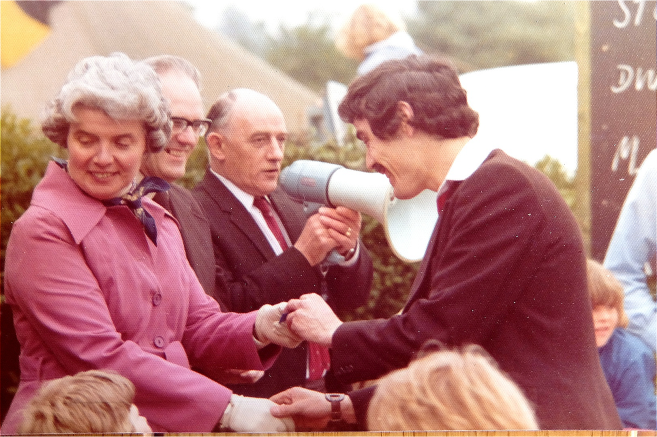 Stan Webb receiving his medal(s) while the superintendent, Mr Hunt, looks on. Ken Garlington is announcing the winners through a megaphone.

The football pitch had an extensive land drain system which kept the ground well drained but it could become a tad uneven so, on one occasion, a road roller was hired to level it. There was a machinery hire yard at Pound Mead, next to Shearn's (now the 'Tramways' estate), so yours truly drove this damned great road roller up Pockeredge Drive, up the Hudswell by-way past the officers' quarters, across the southern end of Peel Circus (where the CCC entrance now stands) and onto the ground for many hours of fun trundling backwards and forwards.

Tis a great pity that this facility has been lost to the community. The ground level has now been raised to create, effectively, a damned great heap for no apparent reason (spoil from the building of Katherine Park?). It is now home to a relatively small children's play park which could have easily been accommodated without destroying the sports facilities. 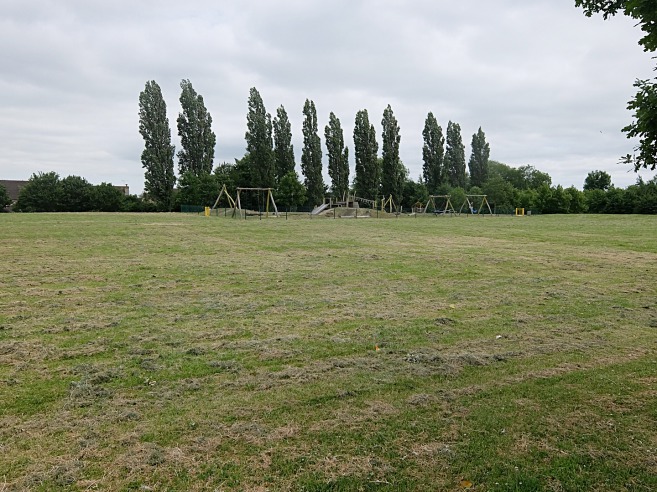 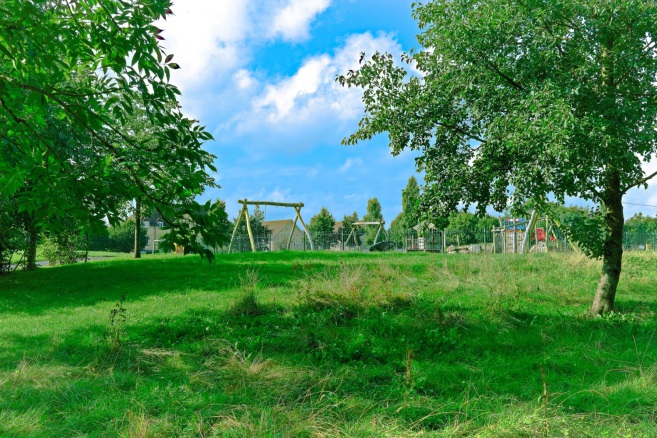 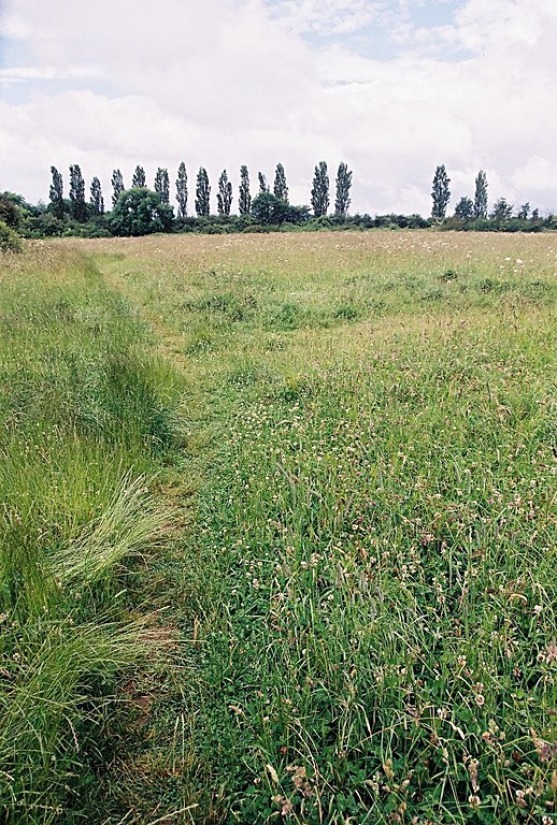 The poplars viewed from the east at around the turn of the century before Katherine Park was built. The Sheffield Ground is beyond.