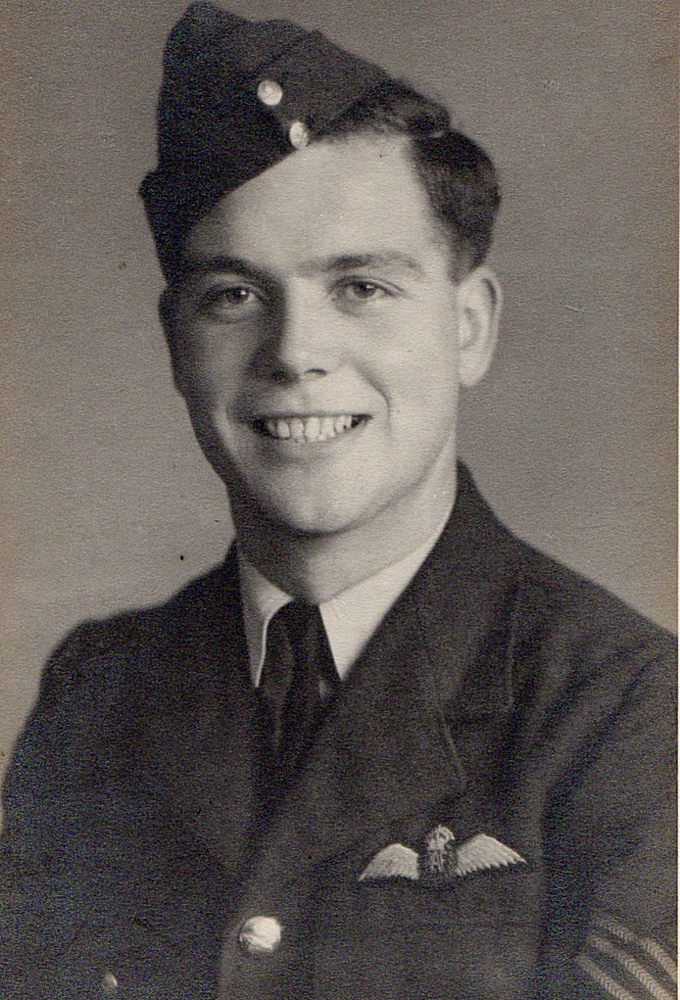 Donald and Gladys Warren moved to Aldhelm Crescent in 1943. Donald was a flight sergeant, flying Avro Yorks with Transport Command, while Gladys was a teacher, working in local schools.

Newly married Donald and Gladys Warren moved into 54, Aldhelm Cresent in early 1943. Donald was a flight sergeant flying Avro Yorks with transport command while Gladys was a teacher working in local schools. By the end of the year Edward was born followed by Michael two years later. I am unsure if some of the prefabricated buildings were smaller than others but at this time the family moved to number 67. I have always understood that we swopped houses with the Hodgman family who only had one son, Rodney. In 1947 Peter was born.

I have little memory of early life but do remember being wheeled down Westwells in a pushchair to the Hawhorn post office, a huge red brick building and to the NAFFI for mum to shop using coupons. Once Edward was three years old he attended the Cheviot House school in the High Street of Corsham. As soon as I and Peter were old enough we also were sent there. Our mother was then able to work as a supply teacher.

Our prefab had a path next to it which led into the playing field for HMS Royal Arthur and we often played there. On the other side of the path lived the Swain family who had two daughters, one named Valerie. We must have had three bedrooms and I shared with Peter. The buildings were not well insulated having only one skin and tended to be very damp. There was a back boiler that heated the water when the fire was lit, burning coal that was collected from the concrete coal bunker outside.

One Christmas I was given a small two-wheeler bike and as I became more confident used to ride it round the oval circuit of Aldhelm Crescent and Everley Road. On one occasion I met a car coming around one of the corners. It was most unusual to see a car on the estate. I panicked and veered off onto the pavement and into wooden fencing. My forehead just above the eye struck the fence, blood pouring out, I still have the scar. Once I had returned home dad took the bike from me and strung it up on wires in the bedroom where it had to stay for three months. Every night I looked up at it from my bed wishing I could have it back.

At the age of five we were sent to school in the village of Box. Mum must have thought that the Box Highlands school was not suitable for us. It meant a long walk past the Tunnel Inn, down Quarry Hill and along the A4 to the school. It seemed a long drag back up the hill to get home. I do not remember making many friends on the estate mainly I think for two reasons. One was that Aldhelm Crescent was away from most of the amenities that were centred  on the larger Southlands side of the Boxfields Road.Secondly, as we were not attending the local school we felt a little like outsiders. We did go to Sunday school at the Methodist Chapel near the Quarrymans Arms but for clubs such as cubs we walked down into Box. Walking alone back up Quarry Hill at a young age on a winter’s night, in the dark with the wind howling through those massive beech trees, thinking that any moment a vagrant was going to jump out on you was not a great experience.

I am not sure when dad owned a car but we seemed to have one when we were very young. He probably needed one to travel to Lyneham where he was based. We often used to visit our grandparents at Brixton Deverill the other side of Warminster.

One day, in 1954 dad went off to Box wearing his demob overcoat and on return said that he had just bought a house in the village at auction. Within a short while we moved to the house which remained in the family for the next 56 years. When I get together with Peter for a few days at Christmas we always walk up to the field where the “Flatroofs” were and walk the old road that can still be traced around Aldhelm Crescent, Portland Crescent and Everley Road. As many old residents have said, we have so many fond memories of happy days growing up in the Boxfields Bungalows.

Gladys Warren who worked as a supply teacher in local schools

(In the following gallery, click on the icon with outward-facing arrows for full-page images) 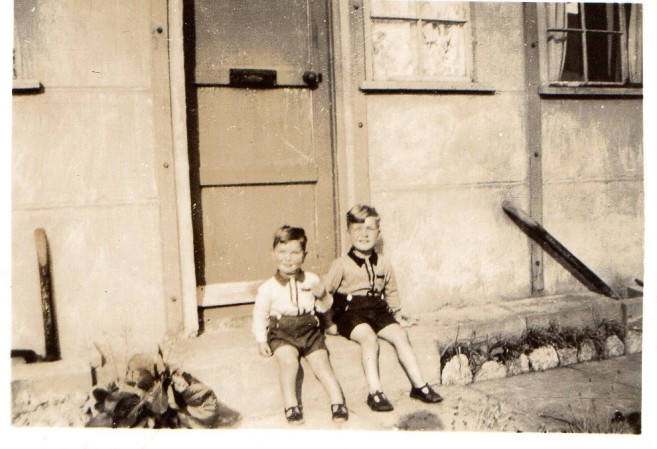 Michael and Edward on the doorstep of 67 Aldhelm Crescent 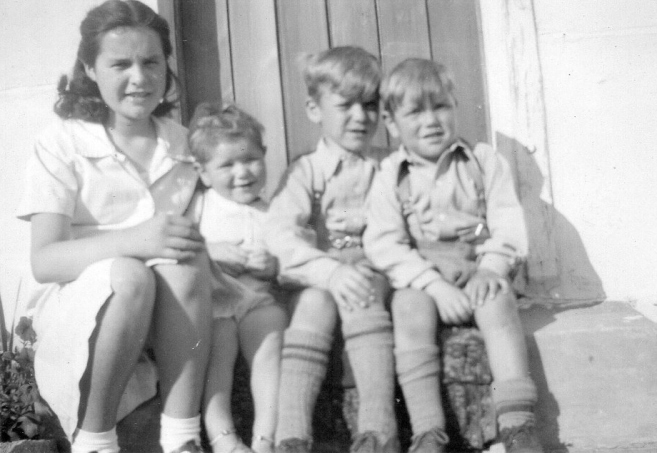 Peter, Edward and Michael with unidentified neighbour at 67 Aldhelm Crescent 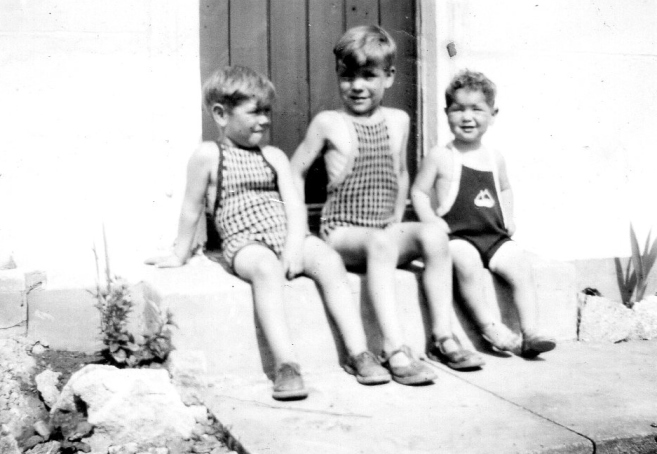 Michael, Edward and Peter on the doorstep of 67 Aldhelm Crescent in the summer of 1949 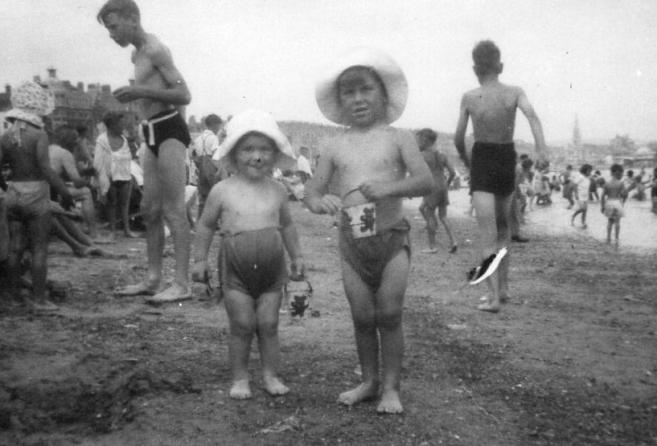 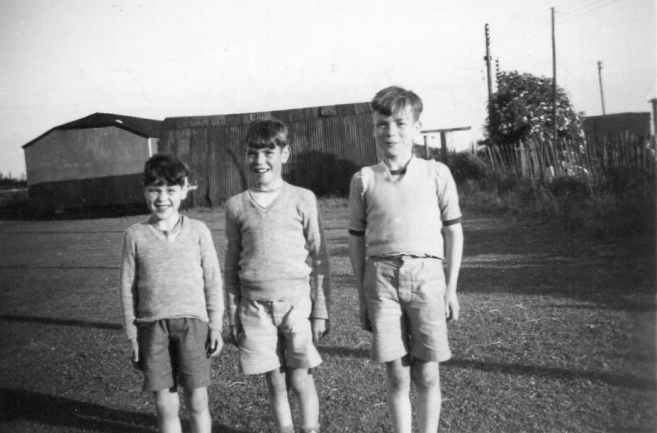 Peter, Michael and Edward on the RAF playing field with, at left, the pavilion (changing rooms) which, by this time (mid-50s), had become Stan Webb's shop with a 'claim to fame' - it was one of the very first self-service shops in the land 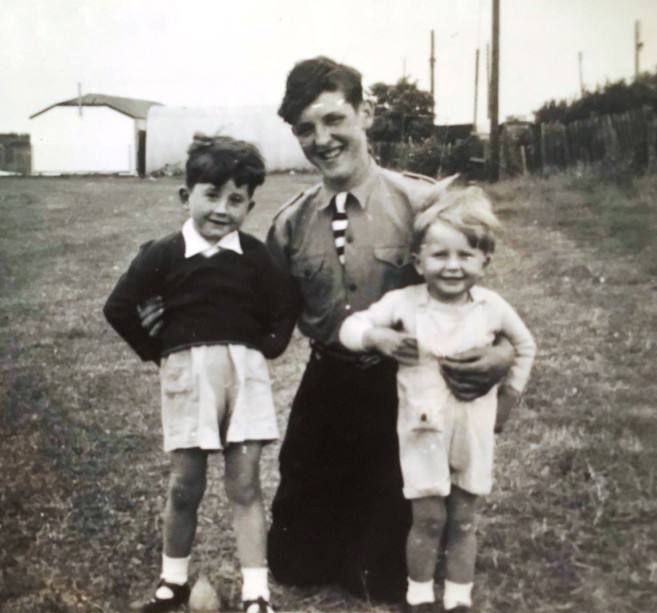 Not the Warren family but a photo taken in the same spot, of Johnny Feeney and the Cafferty boys, David and Billy. Sadly, in 1961, Johnny was killed in a motorbike accident at the Pheasant crossroads in Chippenham.