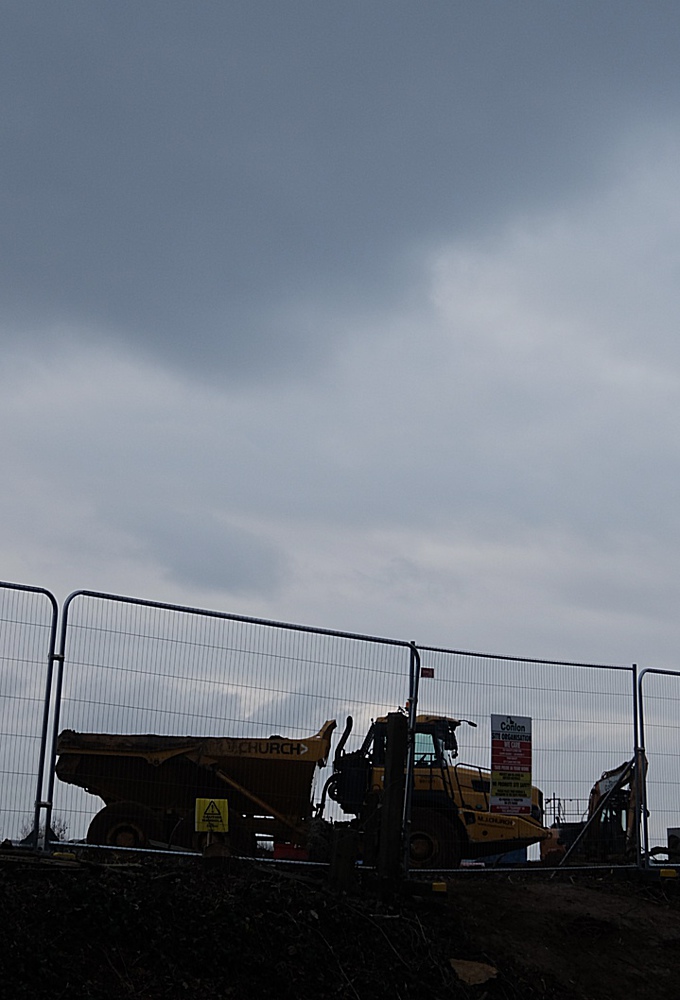 12th January 2019 - the important view of the Clay Vale, Marlborough Downs and Salisbury Plain, from Rudloe, designated by the Wiltshire Landscape Character Assessment (WLCA) report of 2004 and enshrined in Wiltshire Core Strategy, Policy 51 has been ruined by an absent, rapacious landowner (Monsieur Payne of Colerne), an absent, impervious developer (Monsieur Watt of Wellow), local councillors (Monsieur Whalley, Mesdames Lyons and Parker) who have been and are happy to throw Rudloe to the wolves and Wiltshire Council who have not properly discharged their responsibilities. We see, for the last time in the photo below, Oliver's Camp on the western escarpment of the Marlborough or North Wessex Downs through the frame of what will be a steel-clad commercial building. The WLCA report states that such buildings should be on brownfield sites (see below) but this building and others have used an important greenfield site and will block a significant 15-mile view. 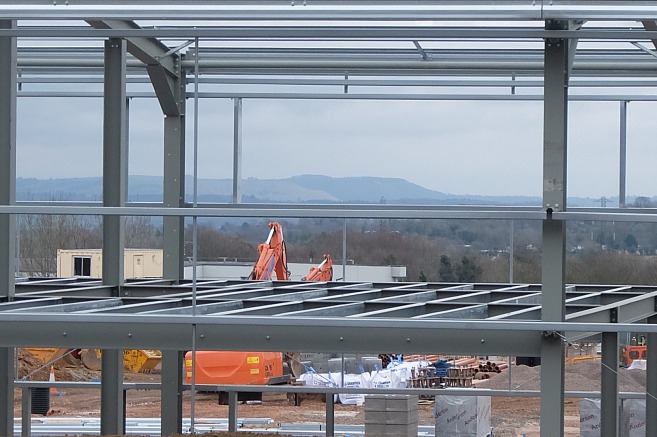 states the following in the quoted paragraphs in the Key Views Management Strategy section:

4.194 The gently sloping topography of this area offers expansive views of both urban areas and the rural landscape. Views from key footpaths could be developed. Views from the A4 are important and clear separation between settlements needs to be maintained eg between Corsham and Rudloe.

4.197 Around Corsham and associated settlements, the lower elevation and disrupted skyline is less sensitive to development although particular care is needed on the rising land around the A4 which is exposed to wider views. Any development within this area should be considered not within the countryside but on brownfield sites. The countryside is sensitive to development and urban fringe pressures. Development should be considered in conjunction with the development of a strong landscape structure which should screen and separate from other settlement.

Yours truly's representations to Wiltshire Council on the Bellway and Bath ASU (Masrich Pension Scheme) developments may be found in the files below.

The WLCA quotes from the works of a number of writers associated with Wiltshire:

"Edward Thomas describes the vastness and remoteness of the downland landscape in the first chapter of his biography of Richard Jefferies (1909), likening it to the ocean: The Downs in this immediate country of Richard Jeffries are among the highest, most spacious, and most divinely carved in rolling ridge and hollowed flank, and their summits commune with the finest summits of the more southerly downs - Inkpen, Martinsell, Tan Hill … Jeffries often thought of the sea upon these hills. The eye expects it. There is something oceanic in their magnitude, their solitude … They are never abrupt, but, flowing on and on, make a type of infinity … they have a hugeness of undivided surface for which there is no comparison on earth.

Another native writer associated with the Downs is Alfred Williams (1877- 1930), a working man employed in the steam-hammer shop at Swindon railway works. Williams wrote both poetry and prose describing the local landscape of this part of the Downs. The slopes of the downs, if they have general forms, are continually changing and interchanging in localities, assuming new and strange shapes, charming and surprising with their grace and exquisiteness … for ever reflecting the mood of the heavens ..."

And now we have grotesque, 7-metre-high, steel-framed, steel-clad monstrosities to look out upon which block our view of these timeless landscapes.

20th November 2018 - The so-called 'strategic gap' between Corsham/Pickwick and Rudloe is being developed. Each day is filled with the noise of earthmoving trucks from early morning until dusk. But apart from the roar of the giant engines, the machines appear to spend most of their time in reverse gear thus giving rise to a constant beeping (which negates their usefulness - if there is a continual beep then the silence is what catches the ear). Anyway, we're in no danger a couple of hundred yards away with houses and roads inbetween ... so why can we hear it? Room for a Dragon's Den invention here. I would have liked to have met (already dead I believe) the chap that invented the reversing beeper and to have stuffed one right up his derriere. 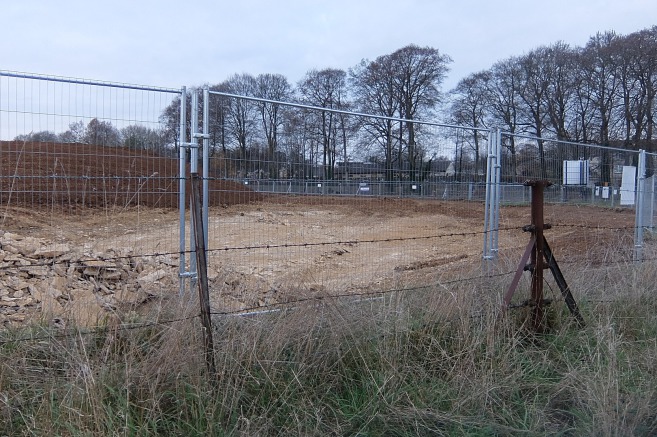 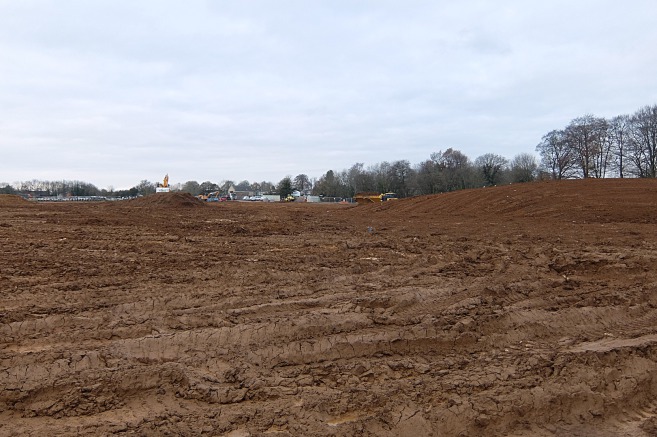 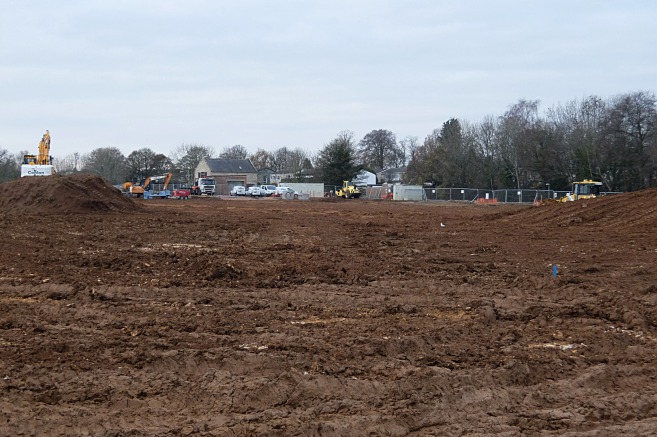 The poor devils in the barn conversion are surrounded by the hubbub all day, every day (except Sundays of course) 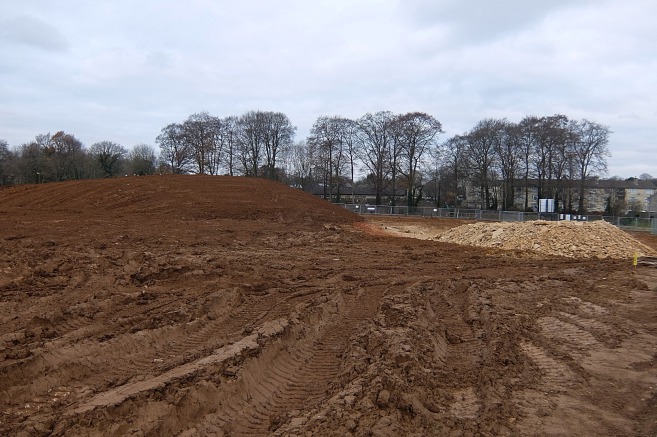 Thankfully, the Bradford Road beeches adjacent to the school provide some semblance of a rural scene at least for the moment. Can you imagine what this scene would look like if they were gone? 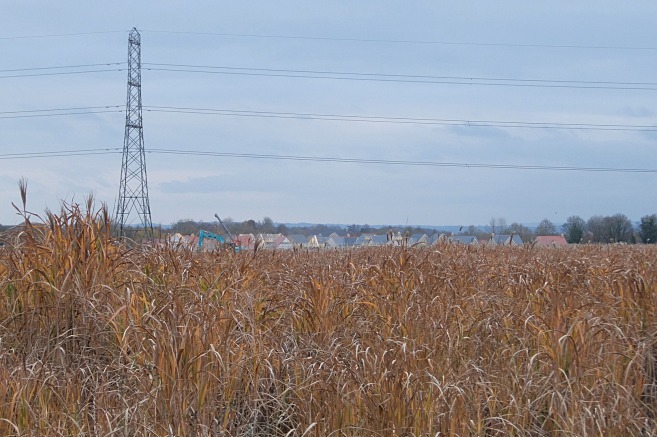 Looking the other way for the moment, we find the Redcliffe speculation creeping up towards Rudloe 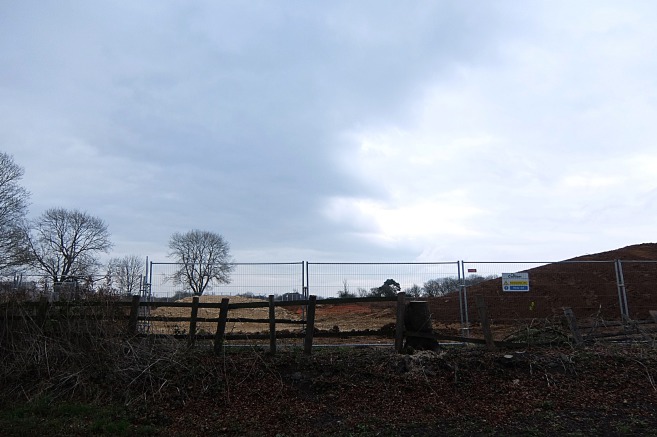 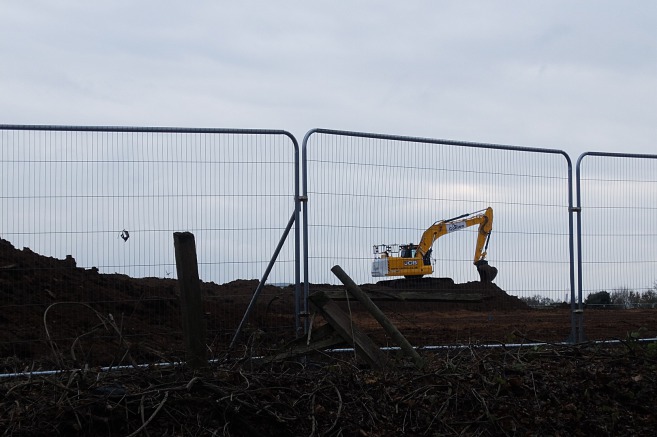 Thankfully, no beeping at the moment from this stationary digger 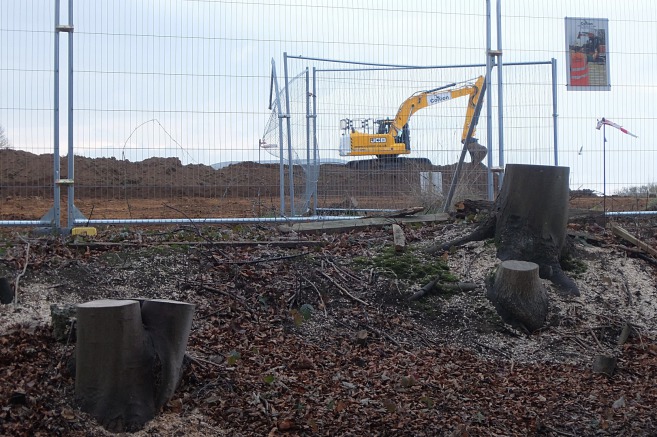 Only six weeks since the felling of the Bradford Road trees but they already seem like a dim, distant memory 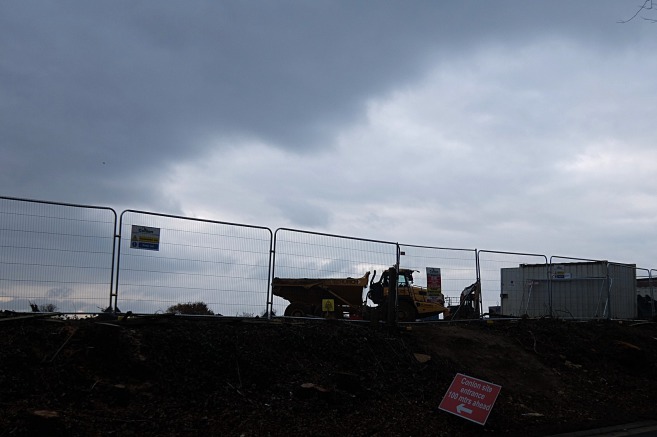 Dark days indeed at Rudloe with meadows, peace and quiet and views all gone 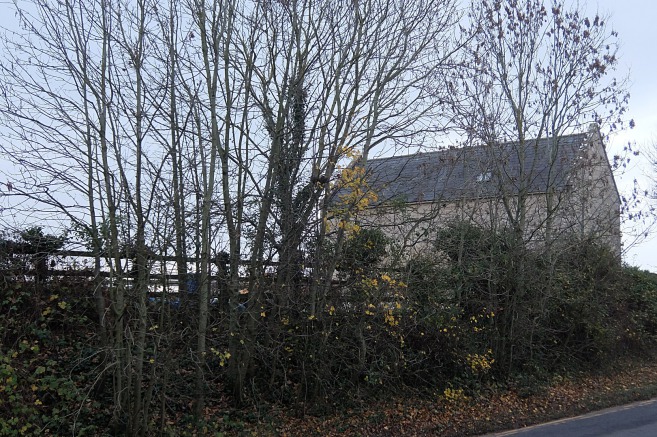