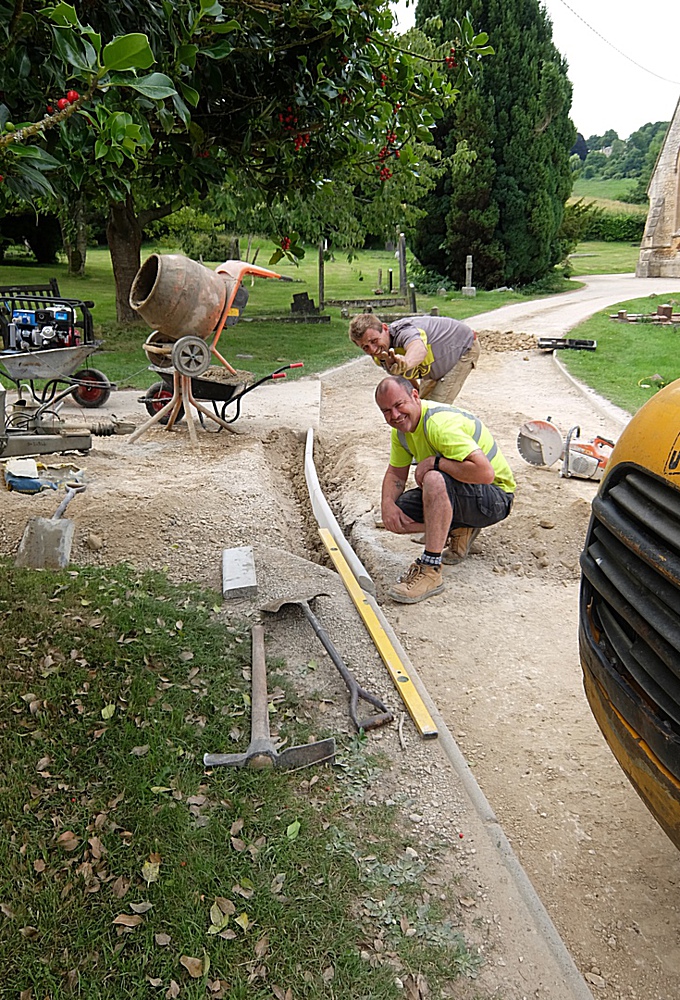 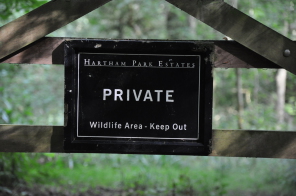 20th May 2021 - 'the' new fence along a 300-metre stretch of the By Brook upstream of Box village has had villagers shaken and stirred. The post and mesh fence is topped with barbed wire which has caused further displeasure amongst locals.

So why the picture from the Hartham Estate woodland? 'Wildlife Area' is a euphemism which, if truth be told, should say 'Area for raising and subsequent shooting of imported (usually) pheasants for sport (and profit)'. This is an example of the disinformation which permeates our lives. I can't resist mentioning the 'Take Back Control' lie of the Brexit lobby. Just today (see date above), a headline in the national papers says 'Another big British name falls to US private equity' which refers to the US takeover of the long-established firm John Laing. So, what does this have to do with the new fence along the By Brook? 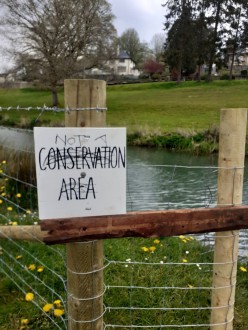 Each end of the fence carries a sign declaring 'CONSERVATION AREA' (which, as you may see, has been defaced and the words 'NOT A' added). This area has been so designated by a local coterie calling themselves the By Brook Conservation Group (BBCG). There has, apparently, been no response to the question (asked through social media) what it is, in this particular place, they purport to conserve.

If there are representatives of a protected species here (such as otters - otters have been seen downstream recently) then the BBCG may have reason in not divulging this information to the general public but wildlife organisations, such as the Wiltshire Wildlife Trust, should be aware of any protected species here, and they are not. There is no obvious evidence of any species of interest whether flora or fauna in this particular, short stretch of river. Indeed, for most of its length the By Brook is unfenced and is home to many fascinating species such as kingfishers, grey wagtails and herons. The gallery below illustrates the unfenced, species-rich By Brook upstream from our fenced stretch.

As may be seen from the gallery of photos taken between Castle Combe/Ford and Box, the By Brook remains unfenced for virtually all of its length and what a fine riparian landscape it is. Wiltshire Wildlife Trust (WWT) does have a plan in place called Project PEBBLE, launched in 2019, for the protection and enhancement of the By Brook and its environment but WWT has said "This fencing is not connected to us at all". 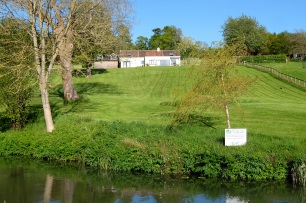 So, what is the significance of this 300-metre stretch? The land to the south side of the river here forms part of the lands of houses Tunnel Throw (the Bonds) and Oak House (Mr Steinbeck). From the sign at the foot of the Tunnel Throw garden, it appears that the Bonds, at least, wish to assert their right of ownership of the river (Government guidance on ownership of watercourses states 'You normally own a stretch of watercourse on the boundary of your land, up to its centre') through the enigmatic, so-called BBCG. The sign, which includes the flag of Wiltshire, says:

'AREA of Natural Wildlife, Birds - Mammals - Reptiles, It is their home, Please Respect the Country Code. No Swimming, Boating or Noise. Enjoy this wonderful footpath'.

Mrs Bond avidly feeds the wildlife (swans, ducks) here and clearly enjoys her riparian patch. But we see that her stretch is no different, wildlife-wise, from any other part of the river. I therefore refer back to the introductory paragraph regarding euphemisms - this is no more a 'Conservation Area' than any other stretch of the river and it is rather galling to be instructed to "Enjoy the wonderful footpath". One does not 'enjoy a footpath' but the landscapes that the footpath traverses; at this point of the Macmillan Way, the landscape now resembles Stalag Luft 300. 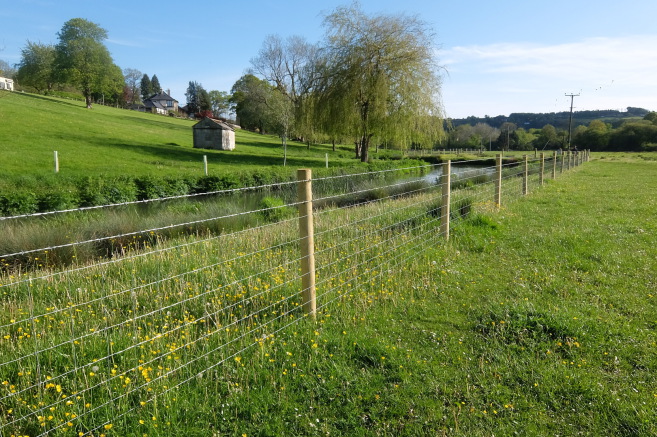 10th August 2019 - Courtney Tracy (Shaftesbury) Otter Hunt met at (perhaps was hosted by) Saltbox Farm close to Drewetts Mill. This information was gleaned through the Facebook (aaaaaaaargh ... I've mentioned that word) pages of Bath Hunt Saboteurs, Bristol Hunt Saboteurs, Weymouth Hunt Saboteurs and numerous other 'Sabs' organisations. I found it hard, at first, to get my head around the fact that there was such a thing as an otter hunt and that it was operating in this area, however a DuckDuckGo (alternative to Google) search revealed its existence through records in the National Archives no less - see National Archives link (the records are held at the Swindon & Wiltshire History Centre). As the otter is now a protected species, the hounds are now designated 'minkhounds' and can discern the difference between different animal species (tongue in cheek of course).

Naughtily, I have taken the following text (further text and photographs may also be found) from one of the hunt saboteur organisation's Facebook pages:

We saw their vehicles heading to the meet at Salt Box Farm, Drewetts Mill, Colerne. Along with hosting illegal bloodsports, this farm supplies Tesco, Muller and Arla. Please consider this when doing your shopping! We watched the hunt unbox the hounds and head to a nearby brook, well known for having a healthy otter population, so Sabs straight away entered the fields to put a stop to the fun and ensure that no animals where harmed.

The hunt were predictably aggressive and blocked Sabs paths and tried to hit them with sticks & pushing & shoving.

A stand off ensued whilst more & more police arrived - around 10 vehicles & 12+ police attended in total. After around 2 hours the hunt advised the police they were packing up & going home - without having entered the river.

Sabs remained in the vicinity for a few hours to ensure this was the case & later got confirmation the hound van was indeed back at the kennels.

From this and other reports, it seems that the Wiltshire Police presence was significant - 10 vehicles is certainly significant in an organisation that has lost 250 officers since 2010 (2017 figures). So why would such a prominent policing event not be mentioned on the Wiltshire Police website or on its Facebook page? This appears to be a policy decision as the agencies of the law have never prosecuted the illegal, often secret, hunting activities of the landowning farmers, gentry and nouveaux riches along with associated blockheads.

Wiltshire Police's response to my request for a report on the matter, particularly the number of officers and vehicles deployed, was as follows:

At around 11am on Saturday (10/08/19) we were made aware of possible tensions between a local hunt and hunt saboteurs in the Box area. Officers attended at various points to make themselves known to both parties, to advise them of the law and to observe activity. No offences were committed and no arrests were made. Sorry, we wouldn't comment on how many officers attended.

The following picture from Bath Hunt Saboteurs of (part of) the police presence gives some indication of the scale of the police operation. 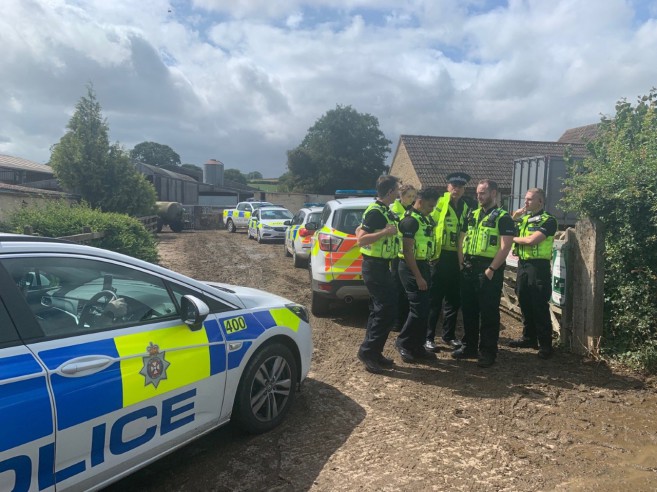 Box Parish Meeting - 17th April 2018. The following open letter to all Box parishioners from David Wright explains the whys and wherefores of the coming Parish Meeting. You (the Box parishioner) should make every effort to attend for the reasons given by David (contact at dave.wright533@tiscali.co.uk) in the letter which follows ...

Please come along to the Box Parish Meeting which is scheduled to be held in the Box Pavilion at 1900 hours on Tuesday 17 April.

This is your opportunity to raise issues and vote for changes that could influence and shape the management of the Box Parish precept and encourage Box PC to become more transparent in its governance.

Parish Meetings are quite distinct from meetings of the Parish Council, although the two are often confused.

The confusion arises for several reasons:

· if present, the Chairman of the Parish Council must chair the Parish Meeting;

· the Clerk to the Parish Council organises and takes the minutes of the Parish Meeting;

· the Annual Parish Meeting often takes place on the same evening as the AGM of the Parish Council.

Some of the differences are as follows:

· Any person on the Electoral Register of the Parish is entitled to speak at a Parish Meeting, at a meeting of the Parish Council members of the Public may speak only at the Chairman’s discretion.

· With the exception of the Chairman, Councillors rank the same as other members of the Electorate.

· Only Councillors may request items to be placed on the Agenda of a Parish Council Meeting whereas any member of the Electorate may do so at a Parish Meeting.

· Any matter pertinent to the parish may be discussed at a Parish Meeting, whereas at a Parish Council meeting subjects for discussion should be limited to those matter on which the Council has the power to act (conferred by various Acts of Parliament).

· The Press and general public have a right to attend Parish Meetings, but anyone not on the Electoral Register of the Parish is “stranger” and does not have the right to vote.

A Parish Meeting is a meeting of the people of the parish.

· Box PC to develop a suite of Asset/Conservation Management Plans that describe the activities and resources required to conserve and maintain the Box parish assets (Box Hill Common, Lovar Water Gardens, Cemetery, etc); in order that an appropriate budget can be set and the Precept determined in accordance with the Good Councillors Guide (page 45).

· Box PC publish the details of how the Financial 'Reserves' are 'Committed' against each Asset/Conservation Management Plan on the Box PC web site by 1 Dec 2018 in order to provide transparency and enable to the parishioners understand how the precept is set.

· Box PC to use the Box PC Annual General Meeting (AGM) currently scheduled for 31 May 2018 to publish a detailed report describing progress against the 'Action Plan’ described in the Box Community Plan (2013-2020); in order that the Box parishioners can understand how Box PC are implementing their views and requirements.

Please come along and have your say, this is our chance to influence what services are provided in our local area. 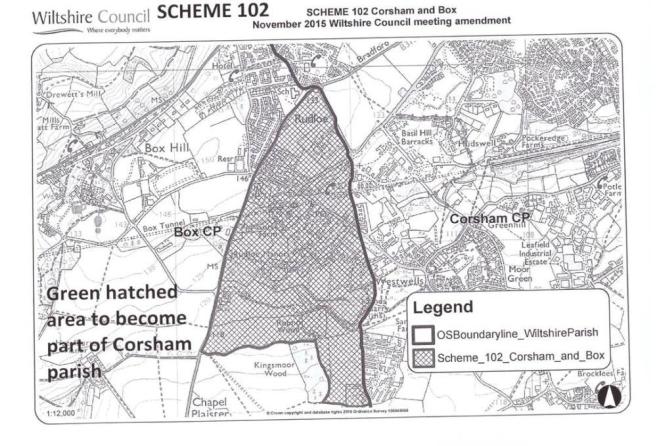 The map shows a substantial area to the east of the B3109 that is proposed to be swallowed up by Corsham. The area will include:

The 'poster' below, from Box Parish Council, is a 'call to arms' for parishioners to make their views known to Wiltshire Council by 20th May 2016. Box People and Places has published a  very professional piece on the subject which can be found through the 'button' below. The piece includes some marvellous photos (ho ho). 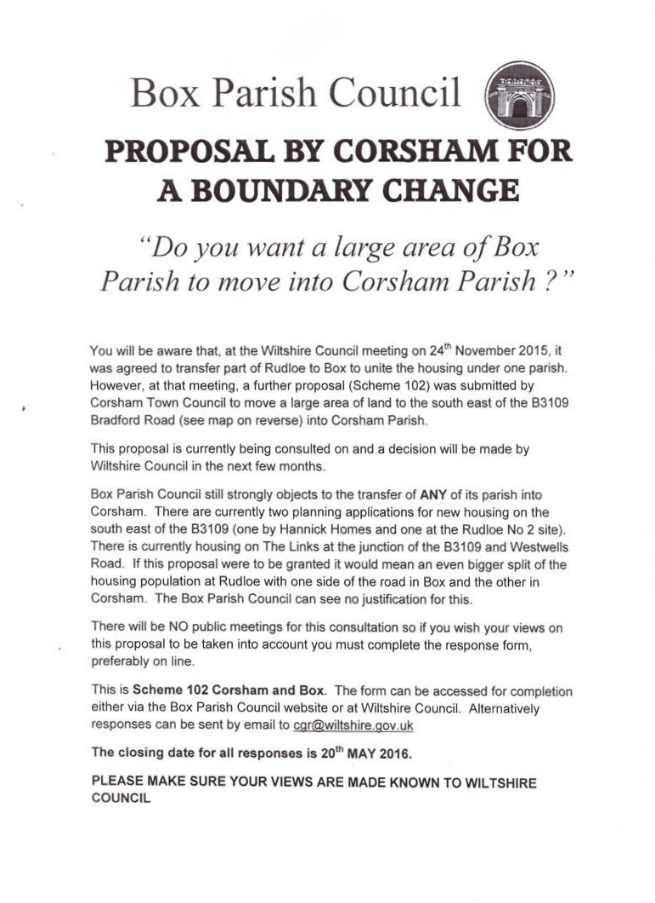