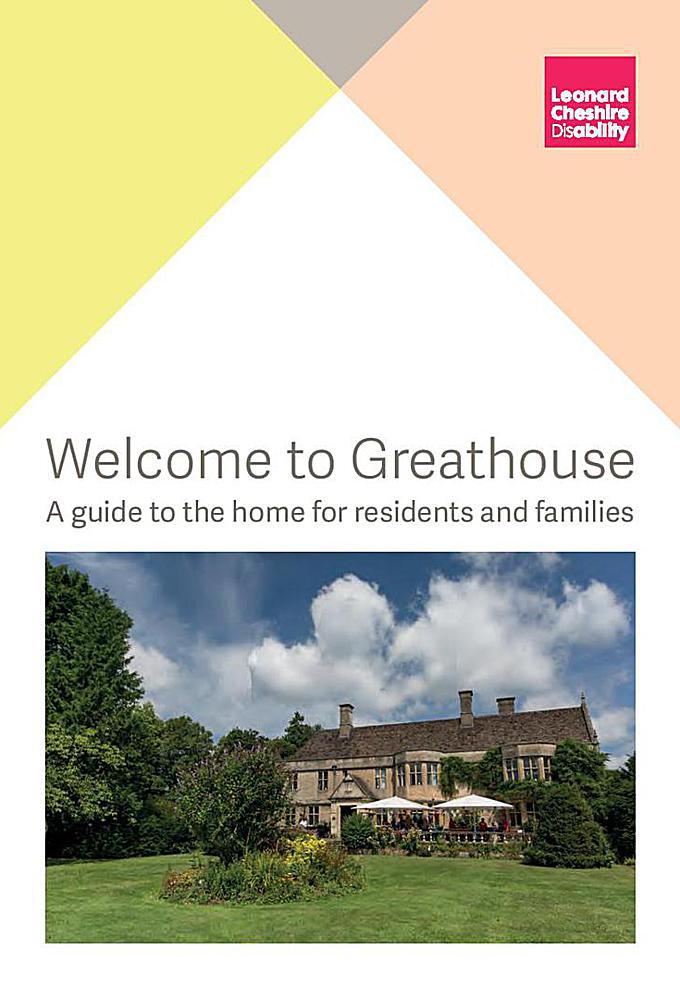 The Leonard Cheshire Foundation home Greathouse at Kington Langley was closed this summer (2018) causing much heartache to residents and their families. Indeed, a number of residents have succumbed to their illnesses following the announcement of closure. The title picture shows the rear view of Greathouse from the its brochure which, ironically, is still online.

As indicated in the following articles, the closure would appear to contravene the founding principles of the Foundation. Greathouse provided a wonderful community setting for its vulnerable residents; for it to be closed at the drop of a hat has been a disaster for those residents.

I witnessed the Greathouse community in the 60s and 70s when I was a weekly visitor and established friendships with residents Stan Stilwell and David Vaughan. There was a marvellous community spirit there. The following articles, one local (ThisIsWiltshire) and one national (the Guardian), focus on one resident, Richard Keat, whose mother, Anne Keat of Rudloe, has been forced to find alternative accommodation. 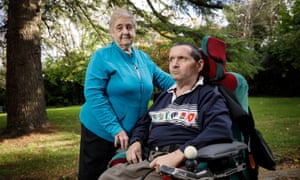 Anne Keat and her son Richard, who was given three months’ notice to leave his Wiltshire care home. Photograph: Sam Frost for the Guardian

Life is settling down again for Richard Keat after a summer of upheaval and distress. He was one of 20 profoundly disabled residents of a Wiltshire care home summoned to a meeting in May to be told that their residence was to close and that they had until the end of July to find somewhere else to live. Within six weeks of moving, three of them were dead.

Keat, 44, a quadriplegic with cerebral palsy, was so upset by the prospect of leaving the Greathouse home in Kington Langley, near Chippenham, that he ended up in hospital after suffering severe weight loss. “He absolutely loved it at Greathouse,” says his mother, Anne Keat. “There was always so much going on, and he soaked it up like a sponge. He made friends he will never see again, some he never said goodbye to.”

Greathouse was run not by a commercial care company, but by disability charity Leonard Cheshire. Its handling of the closure, together with a simultaneous decision to sell 17 other homes as going concerns, has sparked fierce criticism and raised questions about its stewardship of the legacy of its celebrated founder, Group Captain Leonard Cheshire.

Seventy years ago, Cheshire, a highly decorated former RAF pilot, took into his home a dying man who had nowhere else to go. A year later, 24 people with complex needs were living at the house, fortunately a large mansion in Hampshire. Today, the charity that grew from Cheshire’s altruism has an annual income in excess of £175m and supports 30,000 people a year in the UK and overseas. By 2022, it plans to be supporting 90,000.

But critics are asking whether Leonard Cheshire is straying too far from its original mission. In the early 1990s, there were more than 200 “Cheshire homes” in the UK. Half have already gone but by next year, when the sale of the 17 is expected to complete, there will be just 87 providing regulated care services, and fewer than 30 will cater for people with the most severe needs.

“I just don’t understand what they are doing,” says Anne Keat, who at 81 is highly anxious that her son will adapt to his new care home in Chippenham. “Leonard Cheshire must be turning in his grave.” 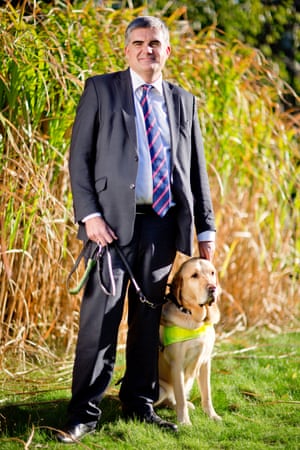 But Neil Heslop, the charity’s chief executive for the past two years, responds: “We think, as an organisation, we have a moral obligation to do more to reach more people and make a bigger difference.” He set out his early thinking in an interview with Society Guardian shortly after his appointment in 2016. He said then that he was reviewing the viability of the charity’s 20 “poorest-performing” homes, in tandem with a strategic review of all activities. Two of those 20, both in Lincolnshire, were shut last year; Greathouse has now followed and the remaining 17 are up for sale to a single, almost certainly for-profit, operator.

While the three closures, as with many since the 1990s, are ascribed to the decaying fabric and unsuitable configuration of the buildings – Greathouse residents shared three bathrooms in a house dating from the 17th century – the sell-offs are more strategic: Leonard Cheshire’s five-year plan to 2022 is “supporting journeys towards independence”, working more with young disabled people and utilising remaining homes as hubs for a wider range of activities and support. For that, they need to be within easy reach of community amenities – a test the 17 homes have failed, though they are considered otherwise viable for another operator. Heslop is adamant that this is not following the lead of fellow disability charity Scope in getting out of residential care provision altogether. “We are committed for the long term to residential care being a key part of our activities,” he insists. However, the way in which it handled the changes over the summer seems to have done little to reassure doubters.

Jess Billing, 24, who worked at Greathouse as a care assistant, says staff were informed of its closure only hours before the residents. “Everyone was angry, we didn’t understand the reasons. But my concern was the residents. It turned out to be probably one of the worst experiences of my life because of lack of support from the big bosses.”

Although Heslop claims the charity subsequently agreed to give any resident up to six months to move if they needed it, Billing says that’s news to her.

All 20 residents had gone by 27 July when the doors were shut. “We were literally boxing everything up, taking computers down and so on, while we still had five or six residents in the building. It was disrespectful.”

Billing, who now works at another local care service, is one of several ex-Greathouse staff who continue to visit former residents in their new homes. Eleven of the 20 moved to other Leonard Cheshire homes, including Bristol and Poole, while Richard Keat and eight others went to facilities run by other providers.

It is unclear to what extent, if at all, the deaths of the three former residents may have been linked to the home’s closure.

Heslop describes the circumstances as “understandably distressing and difficult”, but says: “We are satisfied that our high standards of quality of support for these individuals persisted throughout this period.”

He maintains that the Care Quality Commission the care regulator, is not investigating the deaths beyond its standard procedure. But CQC deputy chief inspector Debbie Ivanova has said in a statement to Society Guardian that it is “reviewing” them.

“We have asked Leonard Cheshire to look at how the closure of Greathouse and the transition of those who lived there to other providers was handled,” she said. “We will be meeting with Leonard Cheshire to review their findings and make sure that learning is identified and shared.”

Asked if, in retrospect, he would have run the closure process any differently, Heslop says: “I think we would consider how to handle better the different needs of residents, families, friends and staff at the point of initial announcement.”

For the charity, which aspires to be seen as a leader in inclusion and representation of disabled people – Heslop himself is blind – the way it proceeds with the sale will now be an acid test.

Protest campaigns have sprung up at most of the 17 homes, many of which are in the midlands and the north including one, Oaklands, near Preston, rated “outstanding” by the CQC.

Heslop says that a working group, including representatives of residents and their families, has set strict criteria or “red lines” for the sale. “If we get offered ‘x’ by somebody, and somebody else offers us ‘half x’ but we believe they are giving us the right reassurances about continuity of care and employment and alignment with our values, we must take the lower offer. We have agreed that.”

Greathouse care home closes its doors at the end of July

Dr Brian Mathew with Ann Keat and her son Richie.

RELATIVES of residents at the Greathouse home in Kington Langley, which is closing its doors at the end of the month, say their loved ones’ grief at the loss of their home is so great it is as if the friends they will be losing as they all move out have died.

Anne Keat, of Rudloe, whose 44-year-old son Richard lived at Greathouse for 18 months before moving to Cote House in Chippenham on Friday (July 6) said the closure has triggered things to breaking point.

“The past few weeks have been nothing short of horrendous with residents and staff heartbroken and very tearful.

“From day one all the residents were grieving. They are really upset and it is a lot for them to handle.

“Richard has been really quite ill, losing four and a half kilos in weight and really grieving as if someone had died.

“He was admitted to the RUH in Bath on June 26. He was as white as a sheet and he looked really ill.

“He did have a genuine diagnosis, severely anaemic, but we feel sure the Greathouse closure triggered things to breaking point.

“Richard is very tearful as his friends are moved miles away.

“Now people who have been friends for years can’t get together easily because of their disabilities.

“They were absolutely heartbroken, the whole thing has been badly handled.”

Box and Corsham Cllr Dr Brian Mathews, who visited residents at Greathouse after the closure was announced in May, said: “It is particularly sad because it is such a loving community, the staff and the residents, they get on so well.

“Residents shouldn’t be treated like objects that can just be moved around. They are people with emotions and friendships.

“It was still providing a really nice service and it had a lovely atmosphere. I think it is a great shame.”

A spokesman for Leonard Cheshire, said: "We cannot comment on or discuss the health of individual residents as this information is confidential.

"However, we recognise that the closure of Greathouse has been upsetting for residents, staff, relatives and volunteers.

"We have provided support to residents to enable them to visit and choose new homes.

"By the end of this week, 14 of the 21 residents will have moved to their new placements and we expect the remaining seven to move on within the next two weeks”.