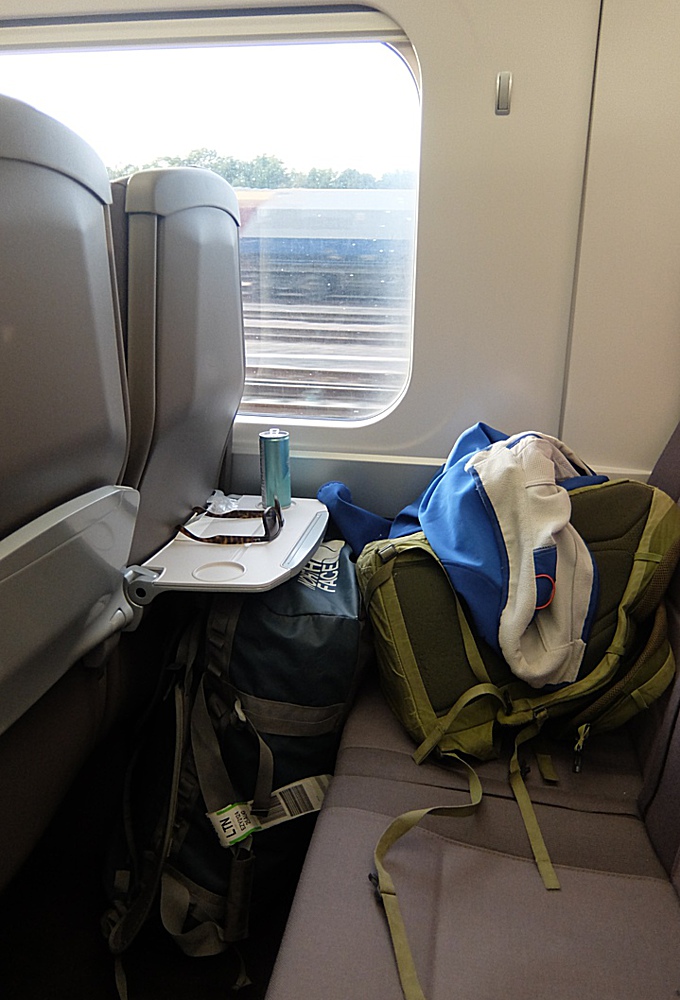 A simple tale of a journey to north London on Bank Holiday Saturday, 25th August 2018

Does travelling bring out the worst in people? Road-rage, tailgating, queue-jumping, bags and feet on seats, lack of consideration and impoliteness of many kinds ... this journey found just a few, but enough, of these kind of things.

The title picture shows luggage piled around a seat (there was space on the luggage racks) on the full, return train from Paddington - the owner had nipped off to the toilet. 'We' took two seats where travellers had also deposited bags but we shouldn't have been put in a position of requesting that bags be moved.

Also on this return journey, much stepping aside was required whilst passengers were searching for seats up and down the train. I stepped aside to let a woman pass; she stuck her nose in the air and sailed regally on; I said "Don't mention it". And on the outward journey, we occupied two seats one of which had a reserved ticket from Reading. At Reading were were expecting the person who had made the reservation but hoping, as is often the case, that he or she did not turn up. Our hopes were dashed when a most objectionable woman arrived who immediately adopted an adversarial attitude, bemoaning her lot because she had been "standing for two-and-a-half hours". Any road up, we vacated the seats and stood, close by in the aisle, along with many others. Some minutes out of Paddington she stood up ready to charge off the train; so much for her "standing" problem. 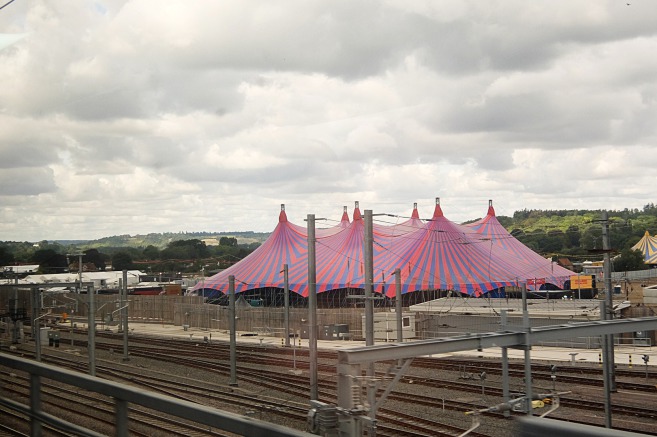 Entering Reading Station, before our encounter with the most objectionable woman. This is one of Reading Festival's marquees with the southern extent of the Chilterns beyond; the Thames flows between. 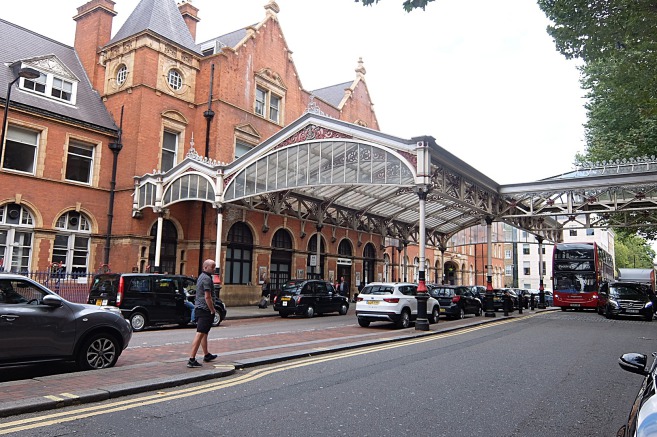 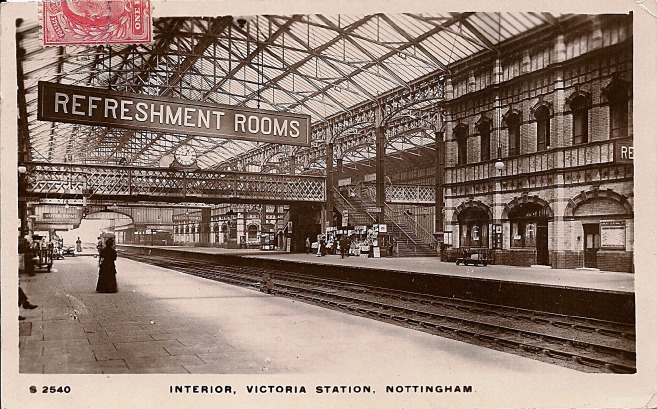 One of Britain's great, provincial stations, Nottingham Victoria, was destroyed in 1967 to make way for a shopping mall 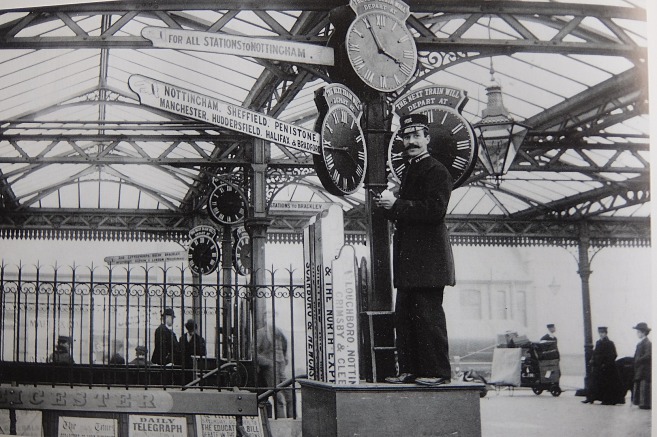 Leicester Central in October 1902 showing the delightful method of displaying train departure times. Those with long memories may recall that Bath Green Park had similar finger boards (but no clocks). This marvellous station is now an industrial park.

In a 'Reminiscence' from Britain's Lost Railways by John Minnis we find "The architecture added to the sense of anticipation ... What we have lost, above all is chiaroscuro, the bright gleams of sunlight shining through patches of utter darkness that gave the great termini so much of their mystique. The soaring roofs were often half obscured in a sepulchral gloom, an intoxicating, if unhealthy, mix of locomotive exhausts and fog". In 1909, G.K. Chesterton wrote " ... you will find in a railway station much of the quietude and consolation of a cathedral. It has many of the characteristics of a great ecclesiastical building; it has vast arches, void spaces, coloured lights, and above all, it has recurrence of ritual. It is dedicated to the celebration of fire and water, the prime elements of all human ceremonial,"

On 5th May 1969, following an extended run down, the Great Central was closed for good. Nottingham Victoria has been replaced by a shopping centre and Leicester Central is now an industrial park. If we had only had the foresight to wait, these cathedrals of the railways would have received listed status and the railway itself could have been used for the proposed HS2 line. Instead, we have the tyranny of the motor vehicle, car parks and shopping centres.

And so we come to the purpose of today's trip ... a tribal war between the English and the Catalunyans at Wembley which the Catalans, deservedly, won. When I first visited Wembley, in 1960, the stadium's position, at the head of Wembley Way, mirrored Ely Cathedral's appellation 'The Ship of the Fens' as, from a distance, it has the appearance of a great ship in a surrounding flat landscape. But now, Wembley Stadium is becoming surrounded by a sea of development and so has lost much of the old magic. 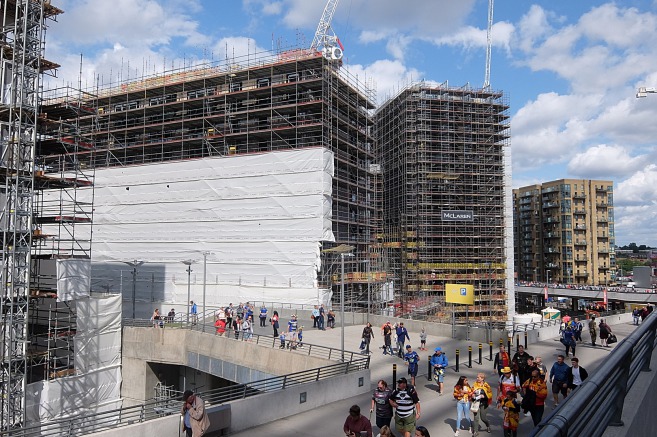 A sea of development adjacent to Wembley Way; development continues from here towards Wembley Stadium station (out of picture to the left) 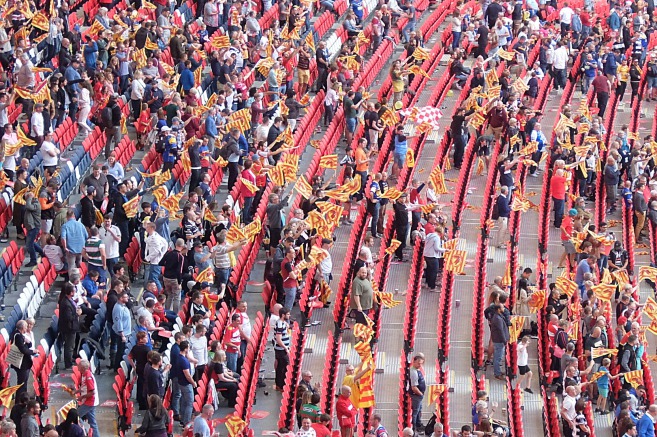 The Catalan flag, the Senyera, much in evidence as Catalans Dragons supporters celebrate victory

As already indicated, the walk between Paddington and Marylebone took in Edgeware Road which was, in the 60s and 70s (at least) a hub of electronics, hi-fi and music shops. Many of these retailers would advertise in just about the only national retail and trade sales magazine at that time, Exchange & Mart. 'We' bought out first hi-fi system (record deck, tuner, amplifier, speakers) here and stuffed the lot into the limited luggage space of our MGA. The following photos show the character of Edgeware Road today; one wonders how the street (and London itself) could change so significantly in just a couple of generations. 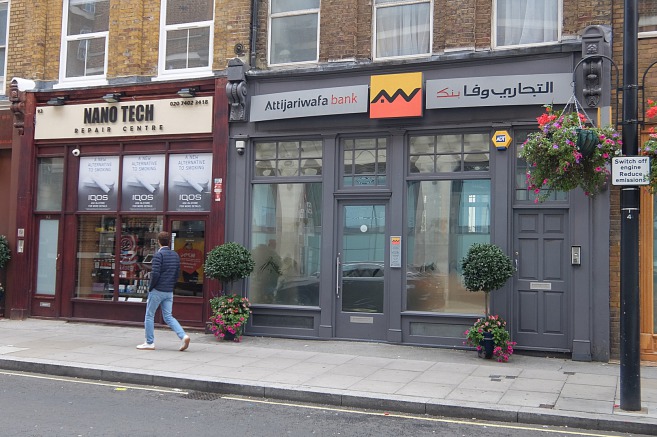 Attijariwafa Bank is the leading bank in Morocco and is part of King Mohammed VI's holding company, the SNI (Societe Nationale d'Investment) 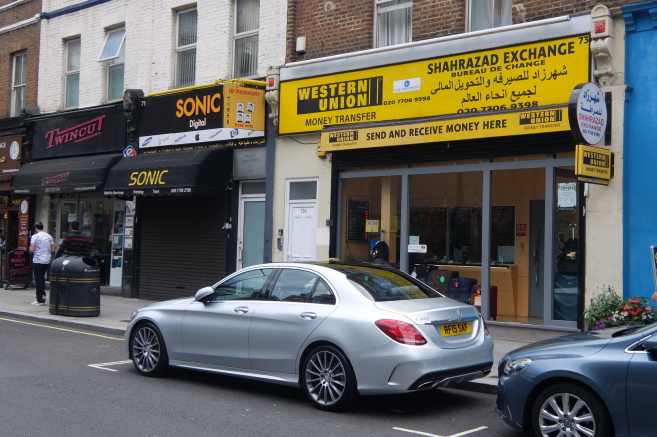 Shahrazad Exchange, in Praed Street actually (as was the Attijariwafa bank picture) 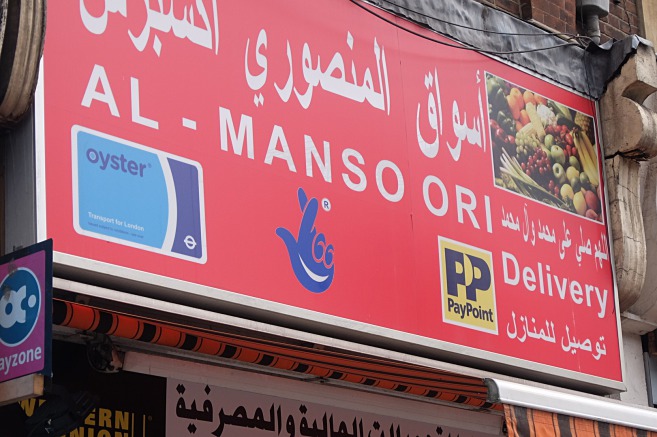 Now we are in Edgeware Road; the electronics shops are long gone 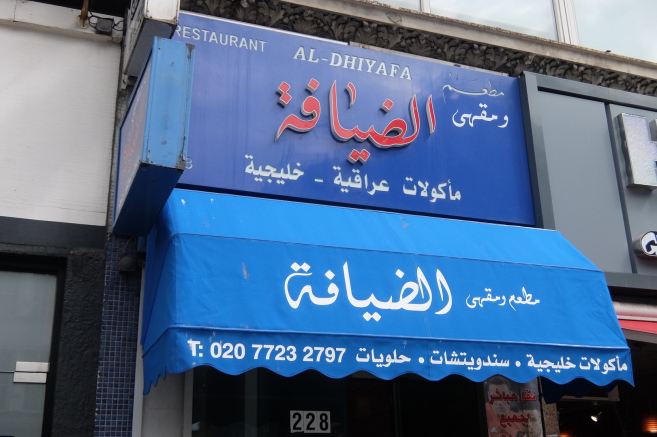 Continuing along Edgeware Road, we find this stylish Arabic script on this restaurant sign and canopy. Unfortunately, the substance of such restaurants is based upon the horrific practice of halal which should be outlawed (in the UK at least). 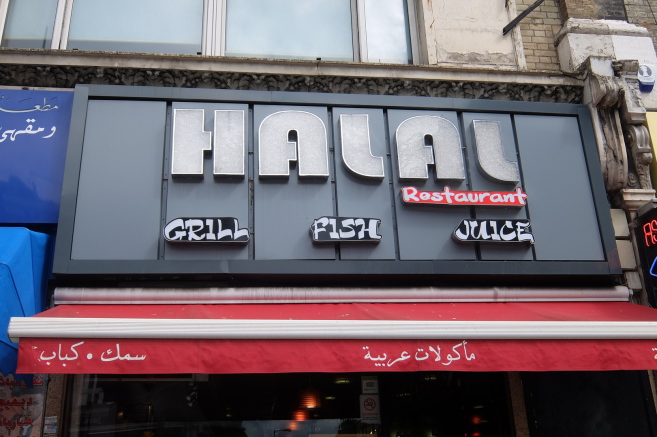 This restaurant, next door to the last, makes no bones about the abhorrent practice 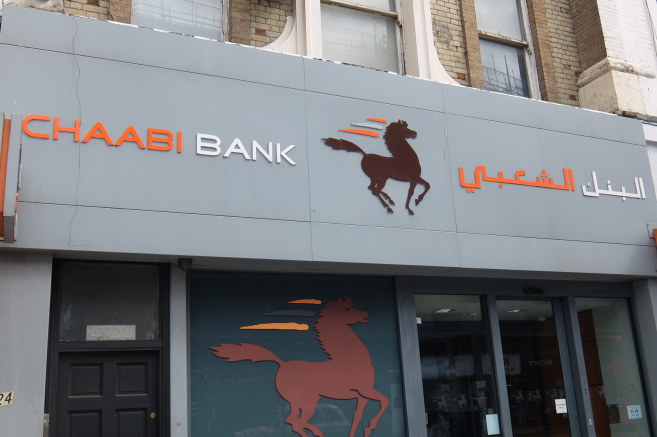 Also known as the Banque Populaire du Maroc (another Moroccan bank, this one with headquarters in Casablanca) 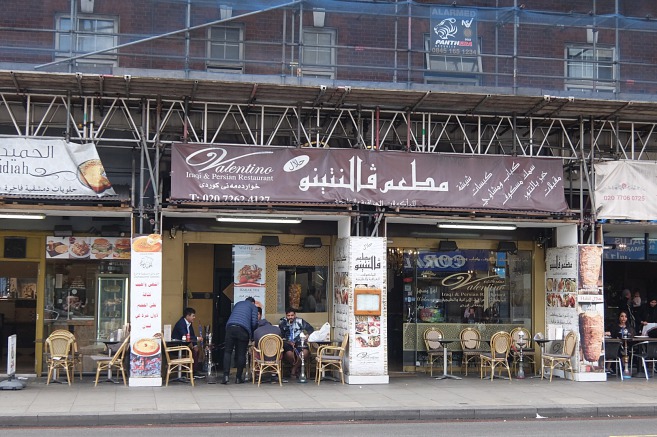 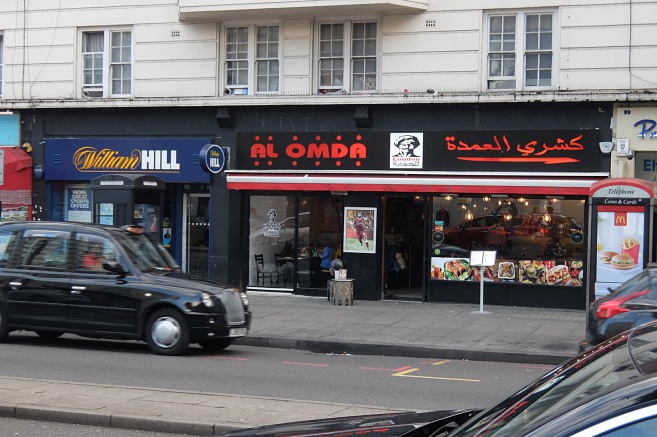 A halal KFC? That is Colonel Sanders isn't it? Maybe not but that's certainly Mohamed Salah in the window - so an Egyptian restaurant (sharp eh!). 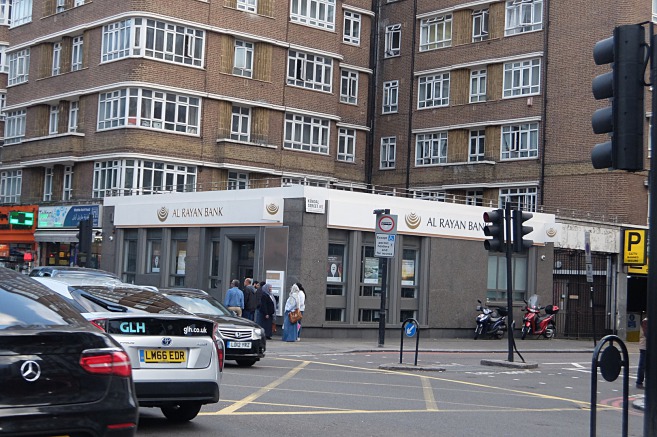 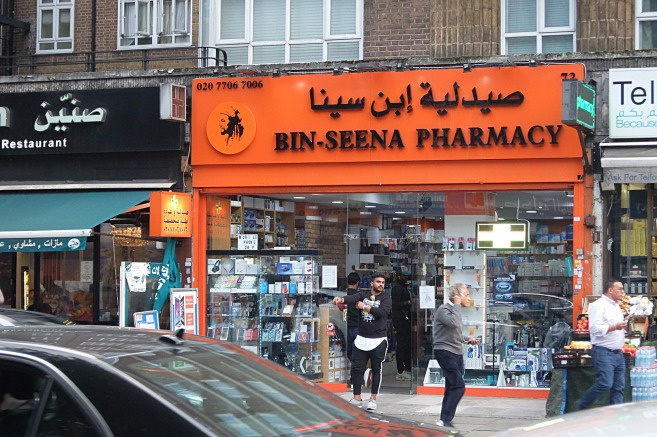 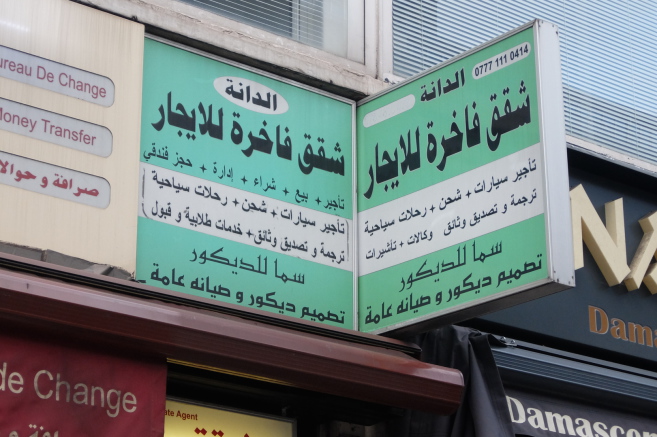 I think, as the sign to the left might indicate, that in English this would be a Bureau de Change (Jeremy Corbyn's irony) 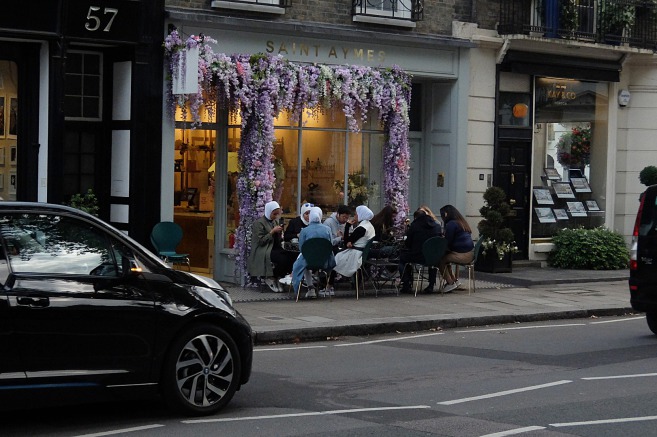 It's starting to get a bit chilly in the evening and here am I wearing shorts. But these al fresco diners should be well protected against the cold.