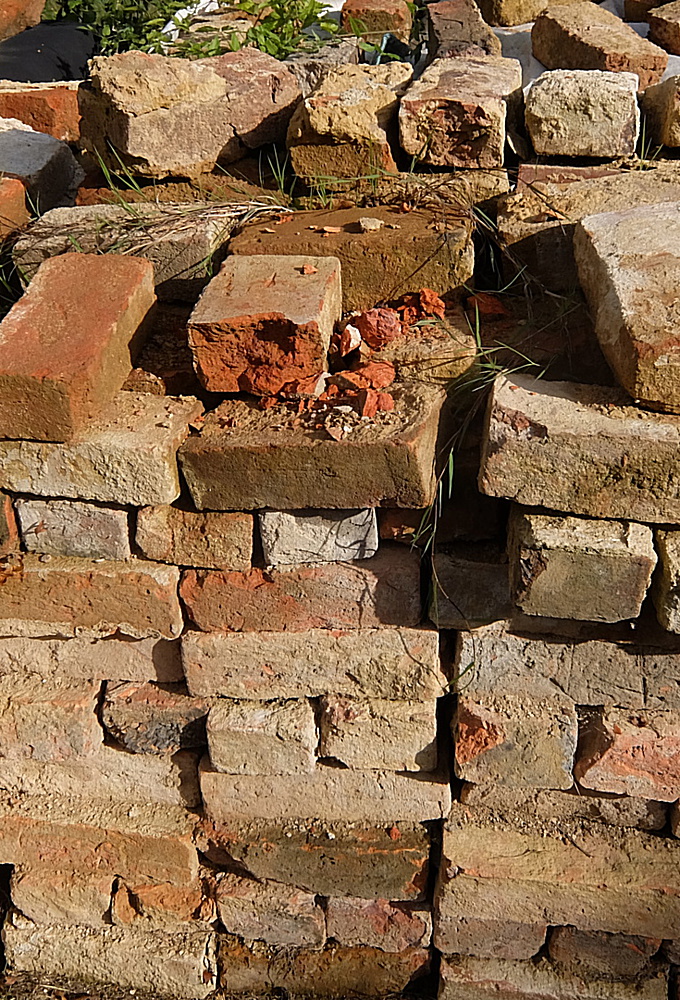 There's a metaphor about modern life buried somewhere in the Heads and brick walls title of this webpage. In the Letters Archive (Letters Archive) section of rudloescene, the reader (yes, the reader) will find a series of letters about the unnecessary, insidious, disquieting noise that permeates our everyday lives.

On this lovely Saturday morning (25th May 2019) I thought I would sit on 'the stoop' to enjoy the sunshine and watch the world go by. Coffee by my side and the sports pages in hand, what more could a man (or yours truly) want? Enter modern life and the damned reversing beeper from a road-roller rolling future hard-standing (presumably) at the construction site that is Corsham School, Broadwood Site (just as an aside, why is there a reluctance to use the location of the school, Rudloe, in its name?).

So what 'normal' sounds did we have on this sunny May morning? Birdsong was significant as were the vehicles passing on the B3109; an odd aircraft possibly at the lower edge of the stratosphere and an occasional barking dog. All these sounds are necessary (but unfortunate in the case of the vehicles) elements of the daily soundscape.

There are a few 'issues' with the reversing beeper apart from the fact that it is an insidious, disquieting noise. Its purpose is to warn people (except the deaf) who may be in the vicinity of the back end of a vehicle that it is reversing. On this Saturday morning, I was about 200 yards away with buildings, gardens, trees and fences between. So why am I, and half of Rudloe, being warned that this road-roller is reversing? My peace disturbed, I wandered down the B3109 to see what was going on ... the roller was rolling with, by the look of it, no one else in the vicinity. So even on site, there was no one in need of a warning.

We have become slaves to automation and have abandoned our own sense and senses in the process. In the Letters archive mentioned earlier, you may see that the authorities will not waver from the prescribed (by pseudo-science) path; warnings of all kinds must be installed and continued no matter the disturbance to everyday life or the discordance with common sense. Why do we need to be warned of a reversing vehicle half-a-mile away?

Just to complete the picture, the beeping started at 8ish and continued until about 9:30. The driver then must have stopped for a tea break but then continued the rolling, and beeping, until noon. Of course, on weekdays we have continuous (actually almost continual) beeping, all day every day, from the works associated with the 88-home Bellway development and Bath ASU pension scheme's speculative Corsham Science Park. As stated elsewhere (on rudloescene) the beeping is so prevalent that it is the silences that are marked.

On frequent walks to Bath along Ashley Road, through Bathampton Meadows, along the Kennet & Avon Canal and up the precipitous roads twixt Larkhall and Lansdown, the signature sound of Bath forms the backdrop. On Thursday (23rd May 2019) the climb up Croft Road and Marshfield Way was accompanied by the sound of an emergency vehicle siren winding its way through central Bath perhaps a mile away. The return trip down these same roads was also accompanied by another.

When taking the canal route into Bath, the 'first' siren may be heard at Bathampton and others follow when further along the towpath towards Bathwick. As Bath and its environs effectively form a bowl, sirens passing through the city are heard in all the outlying quarters; Lansdown, Southdown, Odd Down, Perrymead, Larkhall and so on. Bath attractions such as Alexandra Park, Victoria Park and even the route of the Skyline Walk are particularly susceptible. Should a city where disquieting and disturbing sirens form a constant backdrop remain a World Heritage Site?

The unnecessary high volume and switching principally between wailing and yelping but also occasionally to 'machine-gun' has been queried any number of times by yours truly and always receives an unreasonable, stock response. The use of four different siren sounds, by a police vehicle, between Upper Borough Walls and Green Street (a distance of perhaps 100 metres), was queried some years ago; the rather ridiculous response was that the public too easily become accustomed to one sound (in a few seconds?) so others are employed. I was reminded of the old insurance company TV ad which said 'We won't make a drama out of a crisis'; it seems that the police are determined to make a drama of everything (in fact this now appears to be one of their principal tasks - making 'dramas' for TV).

In spite of the fact that a certain person has pointed out that sirens are overloud and are particularly dangereous if and when started, without warning, in the vicinity (particularly behind) pedestrians, and should if the authorities persist in their use, be preceded by a 'soft start', nothing has been done. Wandering down an urban or rural street, enjoying the sights and sounds, and then having an emergency vehicle siren start up behind you without warning is likely, particularly in those of a sensitive disposition or in poor health, to invoke a heart attack or an episode of Montezuma's revenge.

Other countries, such as Sweden (you know, sensible countries) still employ old-fashioned sirens such as dee-dah (Sweden's are duddle-de-duh) which do not disturb the environment for miles around. And many, or most, continental cities employ ordinances which disallow loud sirens from disturbing the peace. After all, wailing sirens are associated with air raids and are intended to disturb - we should not acquiesce to our authorities blindly pursuing an American model of siren use which make rural Wiltshire and World Heritage Bath akin to New York.