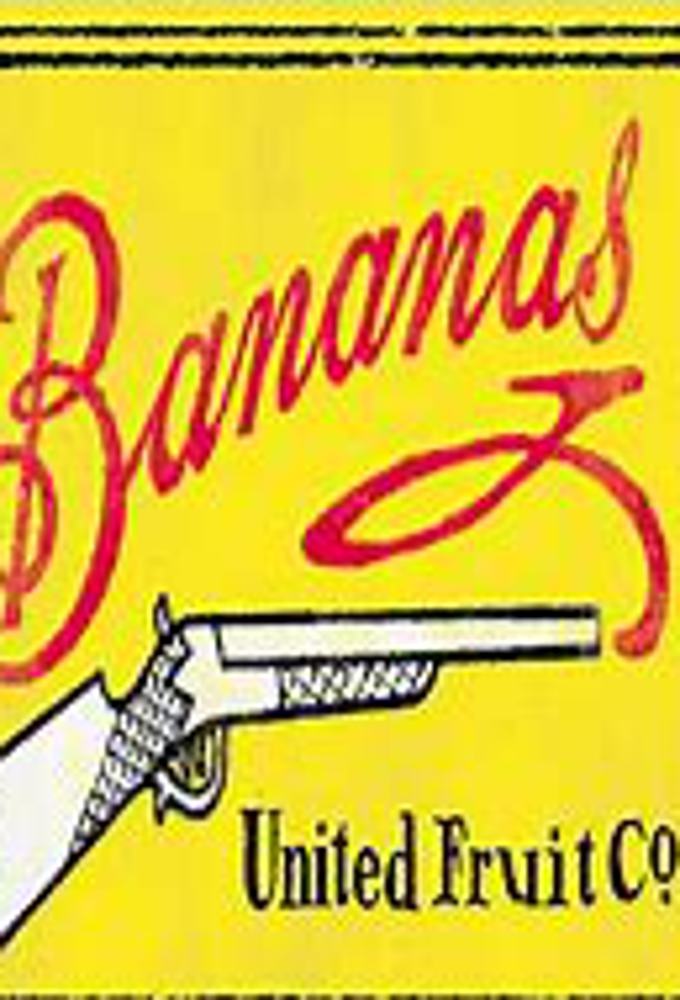 You will find Chiquita brand bananas in many fruit and veg shops, including local ones (Corsham) but as with many or maybe even most food products on our shops' shelves, just a little research will reveal alarming histories. These can range from such things as misleading labelling (for example Wiltshire ham is usually a factory-farmed Danish product cured in Wiltshire) to the hegemony indicated in the title picture caption. Such research can give an insight into why anti-Americanism is so widespread in Third World countries. The first YouTube video below tells of the United Fruit Company's (and America's) dire history in Central America, particularly Guatemala.

The following YouTube video brings the story more up to date:

Guatemala President Jacobo Arbenz Guzman headed a democratically elected government that, through land reform and other initiatives, was attempting to end the latifundia system. To accomplish this, President Árbenz had enacted a major land reform program, where all uncultivated portions of large land holdings were to be expropriated and redistributed to landless peasants. The biggest land owner, and one most affected by the reforms, was the American United Fruit Company.

In May 1954, a shipment of infantry and light artillery weapons was dispatched from Communist Czechoslovakia for the Arbenz Government and arrived in Puerto Barrios. As a result, the United States government, which since 1953 had been tasked by President Eisenhower to remove President Arbenz from power in the multifaceted CIA operation code-named PBSuccess, responded by saturating Guatemala with anti-Arbenz propaganda through radio and dropped leaflets, and began bombing raids using unmarked airplanes. The United States also sponsored a force of several hundred Guatemalan refugees and mercenaries who were headed by Castillo Armas to help remove the Arbenz government. On 27 June, Arbenz decided to resign. This allowed Armas and his CIA-assisted forces to march into Guatemala City and establish a military junta, which elected Armas as President on 7 July. Consequently, the Armas regime then consolidated power by rounding up and executing suspected communists, while crushing the previously flourishing labour unions and reversing the previous agrarian reforms.

Che Guevara said: "The last Latin American revolutionary democracy – that of Jacobo Arbenz – failed as a result of the cold premeditated aggression carried out by the United States. Its visible head was the Secretary of State John Foster Dulles, a man who, through a rare coincidence, was also a stockholder and attorney for the United Fruit Company".

Let's now move further south to Chile ... Following significant interference in the Chilean economy and its politics by the US government and the CIA over many years, on September 15, 1970 prior to president-elect Allende taking office, Richard Nixon gave the order to overthrow Allende. This was certainly not the first time that a US president had ordered the ousting of democratically elected president. To quote Wikipedia ... Pinochet assumed power in Chile following a United-States-backed coup d'etat on 11th September 1973 that overthrew the democratically elected socialist Unidad Popular government of President Salvador Allende and ended civilian rule. Following his rise to power, Pinochet persecuted leftists and political critics, resulting in the executions of thousands of people, the internment of as many as 80,000 people and the torture of tens of thousands.

Pinochet's fortune grew considerably during his years in power through dozens of bank accounts secretly held abroad and a portfolio of real estate. He was later prosecuted for embezzlement, tax fraud and for possible commissions levied on arms deals. By the time of his death in 2006, about 300 criminal charges were still pending against him in Chile for numerous human rights violations during his 17-year rule, tax evasion and embezzlement during and after his rule. He was also accused of having corruptly amassed at least $28 million.

And so American hegemony continued (and continues) in Central and South America (and elsewhere) - the U.S. supported the right-wing Contra militia against the democratically-elected, socialist Sandinista government in Nicaragua. The list of such interventions is instructive - Noam Chomsky has been a prominent critic of American imperialism; he believes that the basic principle of the foreign policy of the United States is the establishment of 'open societies' that are economically and politically controlled by the United States and where U.S.-based businesses can prosper. A review of the US invasions of countries in Central America and the Caribbean may be found here: https://www.telesurenglish.net/multimedia/US-Invasions-in-Latin-America-and-the-Caribbean-20160725-0017.html#

And while the US was overthrowing democratically-elected governments in Central and South America, it was killing hundreds of thousands* of civilians in Vietnam, Laos and Cambodia through its bombing. The CIA waged a proxy war in Laos, dropping two million tons of ordnance. The CIA has called the effort “the largest paramilitary operations ever undertaken by the CIA.” The bombing campaign began in 1964 and lasted until 1973. This proxy war was unknown to many at the time. An airline secretly owned by the CIA, Air America, hugely assisted in the operation.

In Laos alone, we find the following statistics:

2 million tons – the amount of ordnance dropped on Laos between 1964 and 1973, according to Legacies of War an advocacy and education group. This amounts to a planeload of bombs every eight minutes, 24 hours per day, for nine years.

270 million - the number of cluster bombs that were dropped on Laos during this period.

80 million -- the estimated number of cluster bombs that did not detonate, most of which are still buried in farmland.

210 million -- how many more bombs were dropped on Laos than were dropped on Iraq in 1991, 1998, and 2006 combined. In fact, Laos is the most heavily bombed country per capita in history.

It's difficult to find the number of Laotian people actually killed by the bombing* but former US president Obama described Laos as the most heavily bombed nation in history. Eight bombs a minute were dropped on average during the Vietnam war between 1964 and 1973 - more than the amount used during the whole of World War II.

The US flew 580,344 bombing missions over Laos, dropping 260m bombs - equating to 2m tons of ordnance, with many targets in the south and north struck time and again as part of efforts to isolate Communist North Vietnamese forces. Most devices dropped were anti-personnel cluster bombs.

*From Ken Burns's series on the Vietnam war, we discover the figure of two million civilians killed in Vietnam, Cambodia and Laos. However, the number of civilians killed or maimed through the use (through spraying from the air) of the herbicide Agent Orange may not be included in this figure. The History.com pages on Agent Orange (here - https://www.history.com/topics/vietnam-war/agent-orange) state that 400,000 people were killed or maimed as a result of exposure to herbicides of which Agent Orange was the most lethal. In addition, Vietnam claims half a million children have been born with serious birth defects, while as many two million people are suffering from cancer or other illness caused by Agent Orange.

Napalm, developed by the US in a Harvard laboratory, has been used to kill and maim tens of thousands in many theatres of war. Perhaps the most famous photograph (by Nick Ut) of the aftermath of a napalm attack (by a South Vietnamese aircraft) in the Vietnam war was of children, including the Napalm Girl, running from such an attack. 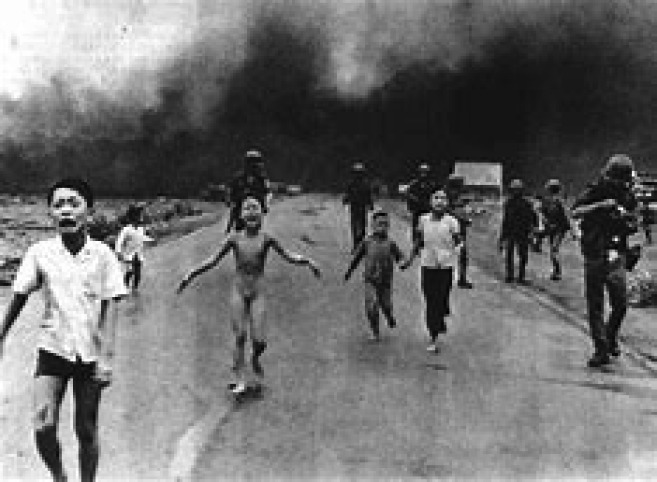 As described in another section of this website here: https://www.rudloescene.co.uk/articles/bombing/, Britain too has been responsible for the mass murder of civilians by the 'area bombing' (not targetted bombing) of German cities at night. And what happened to the perpetrators? 'We' gave the chief of Bomber Command a knighthood and, latterly when we should have known better, erected a monument to the perpetrators who 'were only following orders' (where have we heard that before?).

What a disgusting, impersonal, immoral, murderous method of killing bombing is and it continues to this day across theatres of war in the Middle East. On BBC World Service's Weekend programme on Sunday 4th March 2018, BBC's chief international correspondent, Lyse Doucet, commenting on the coming visit to the UK of Saudi Arabia's crown prince said: "Britain is a major supplier of weaponry (to Saudi Arabia) including the bombs that are being used in the Saudi-led coalition campaign that was unleashed in May 2015 in Yemen which have caused many, many civilian deaths".

To be clear (why am I using hackneyed, Tory verbiage?), Britian (British Aerospace included, which has an establishment in Skynet Drive) is supplying arms to a country which, according to Noam Chomsky, has "one of the most grotesque human rights records in the world".