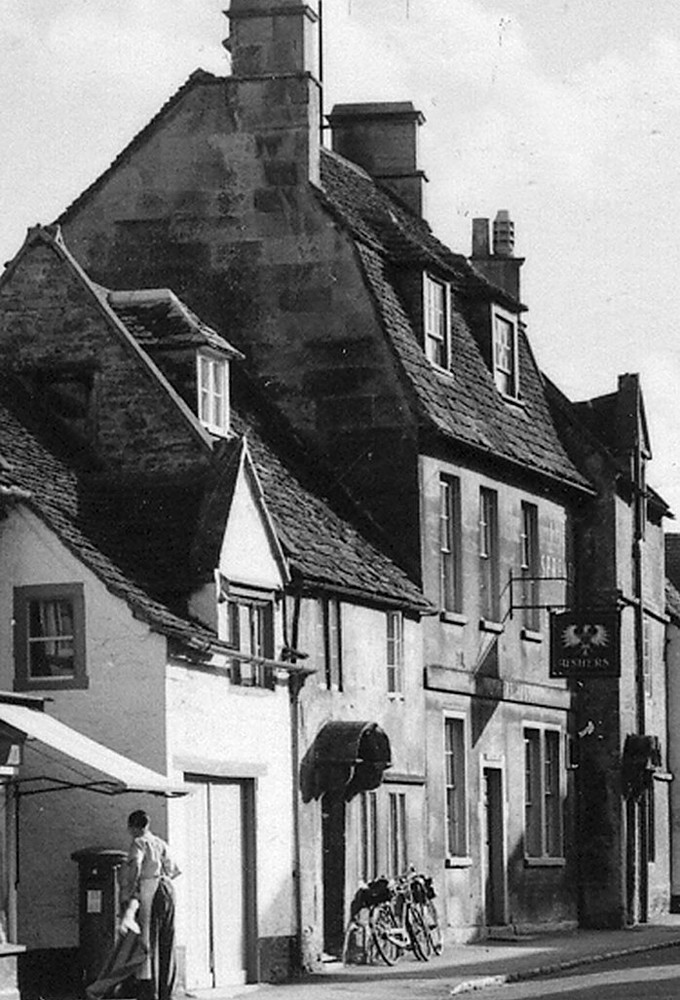 9th February 2017 - The Two Pigs and continuation of the 250-year history of the building as a public house are tragically lost on our watch as Wiltshire Council approve conversion to a private dwelling. And, as indicated in articles below, this has happened with barely a whimper from the local community, former customers, Corsham Town Council or Corsham Civic Society. See the Wiltshire Council approval, change of use and listed building consent documents in the links below. 1950s title photograph courtesy of Andrew Swift (see below).

More on the demise of the Two Pigs on Andrew Swift's website here: awashwithale in an article dated 15th February 2017

28th January 2017 - a representation to Wiltshire Council planners on planning applications 16/11609/FUL and 16/12193/LBC regarding The Two Pigs change of use from public house to single dwelling. 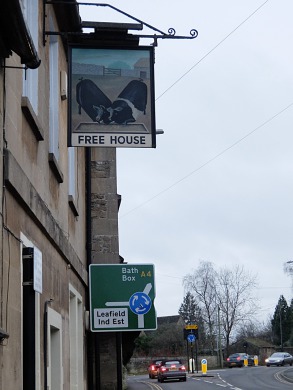 Whilst the 18th-century history of The Spread Eagle remains to be uncovered (here), we can look back at some aspects of its history starting in 1837 when the Wiltshire Independent announced: 'To be sold by auction ... Lot 2. A MESSUAGE or PUBLIC HOUSE called "The Spread Eagle" situate at PICKWICK, at the side of the Turnpike-road from London to Bath, with all necessary and convenient attached and detached Offices, in the occupation of Mr. Wm. Rawlings. This lot is most desirably situate for business, more particularly during the progress of the works of the Great Western Railway. The tenants are under notice to quit at Lady-day next'.

During the Rawlings tenancy, the pub came up for sale on a further two occasions, in 1845 and 1868. At this last sale, Alfred Rawlings declared (in a conveyance) that "I declare that I do hold or have become tenant to Thomas Henry Allen Poynder of a Messuage or Tenement, Garden and premises called 'The Spread Eagle' ... and keep and use the said House as a Public House or Beer House". The conveyance finishes with "Agreement for renting the Spread Eagle at Pickwick from Michaelmas 1868, rent £14".

From an indenture of 1889, we find that Thomas Poynder (Baron and Lord Islington) of Hartham Park had a vast land and property portfolio which included many pubs: the White Hart at Kington St Michael, the Roebuck at Easton, the Great Western, the Falcon at Wootton-under-Edge, the Chequers (between Chippenham and Corsham) and the Spread Eagle.

The Cross Keys was also in the Poynder portfolio as we find in a response to a telegram of January 1897 on the subject of the Poynder Estate, "Your telegram to hand. The Cross Keys Public House is included in the lease to Mr Stevens, there is no agreement with him for the Spread Eagle. I enclose the old agreement with Rawlings". So it looks like, Mr Stevens may have been the occupant/innkeeper at the Spread Eagle before the turn of the 20th century and between the Rawlings family and James Martin.

What a catastrophe if the demise of the Spread Eagle/Two Pigs takes place on our watch. And yet, 'we' appear to be happy to let 250 years of history slip away with no sign of lament. Corsham Town Council planning committee, meeting on 11th January 2017, on the change of use of the Two Pigs from public house to a dwelling resolved that "no objection be raised". As I say in the 9th January 2017 article below, with 700 homes (and two-thousand people) approved between Pickwick and Rudloe, Corsham Town Council should be fighting to both retain existing services and look to providing further facilities for the coming conurbation. But what do we get? A pitiful "no objection".

9th January 2017 - The Two Pigs. A planning application was submitted on 23rd November 2016 by the owners of The Two Pigs for change of use from a public house to a private dwelling. The application and associated Design and Access Statement may be found at the two 'links' below.

Planning advice given by planning officer, Charmian Burkey, is stated on the application as "Location and proximity of similar facilities suggest change of use application will be successful". However, with the loss of other local pubs/bars (the Cross Keys whose future is in doubt; the Rudloe Arms which effectively no longer has a bar; Corsham Community Campus which no longer provides bar facilities and Rudloe Community Centre whose bar closed in September 2013) the demise of a local, very popular pub, in spite of the proximity of The Hare and Hounds, will be a great loss to the local community. Indeed, a major factor in the loss of bar facilities at Corsham Community Campus was that it was not appropriate for councils to provide bar facilities to the detriment of local pubs. However, here we have the worst of both worlds with community facilities lost and a local pub potentially lost.

But not only that! Seven-hundred new homes have been approved (150 at Pickwick - Redrow, 100 at Copenacre - Bellway, 170 at Bradford Road - Redcliffe, 99 at Rudloe - Hannick & Green Square and 180 at Hawthorn - Framptons) between Pickwick and Rudloe/Hawthorn. Seven-hundred homes will bring what, two-thousand 'new' residents? And what will these new residents want? Facilities, services, openings ... not closings! (And, by the way and just an aside, where the hell are these 2,000 people coming from? Wiltshire Council’s Planning Consultation response dated 12th November 2015 states: “We can advise of an immediate housing need of 74 households seeking affordable housing in Corsham and the surrounding community area." ... 700 new houses will bring, [at 30%], 210 affordable homes!).

But not only that! More and more people are being squeezed into less and less 'social space'. According to census statistics, the 2011 population of the Pickwick and Corsham Without and Box Hill wards was 10,786. With an additional two-thousand, close on 13,000 people (okay, this figure includes children) will be vying for space in the one remaining pub, the Hare & Hounds.

But not only that! Should we 'approve' (through inaction) the closure of a popular, local pub after 250 years? The Two Pigs and its predecessor, the Spread Eagle, have a long history stretching back to the 18th century. Its loss without a fight would be a 21st-century tragedy. On a recent episode of Radio 4's 'Thinking Allowed' on the subject of the relationship between literature and sociology, Dick Hobbs said: "There is no factory or workbench to go to, there is no corner pub to go to. Where do I go to find a centre of community? The pub, this cornerstone of working-class social interaction and fiction isn't there any more".

Planning Application for The Two Pigs
Design and Access Statement

After perhaps 250 years, the Two Pigs (formerly the Spread Eagle or the 'Spread') closed its doors, apparently for the last time, on 7th December 2016. Great shame as this was a fine pub with no muzak, machines or meals!

The 'planned' closure date was widely advertised as Christmas Eve so many patrons or locals (including yours truly) planned a last visit or two leading up to the big day! However, it seems that a bit of a rotten trick was played and closure came 'out of the blue'. 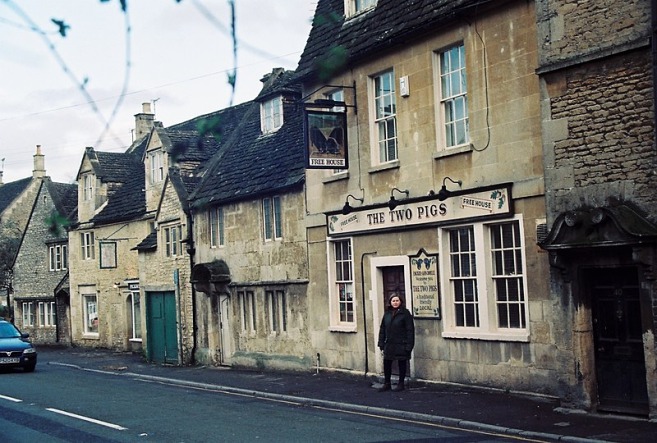 One can only hope that resurrection might come to pass in the not-too-distant future through an offer that the owner can't refuse (wishful thinking perhaps). The 'Pigs' is pictured above on New Year's Day 1999.