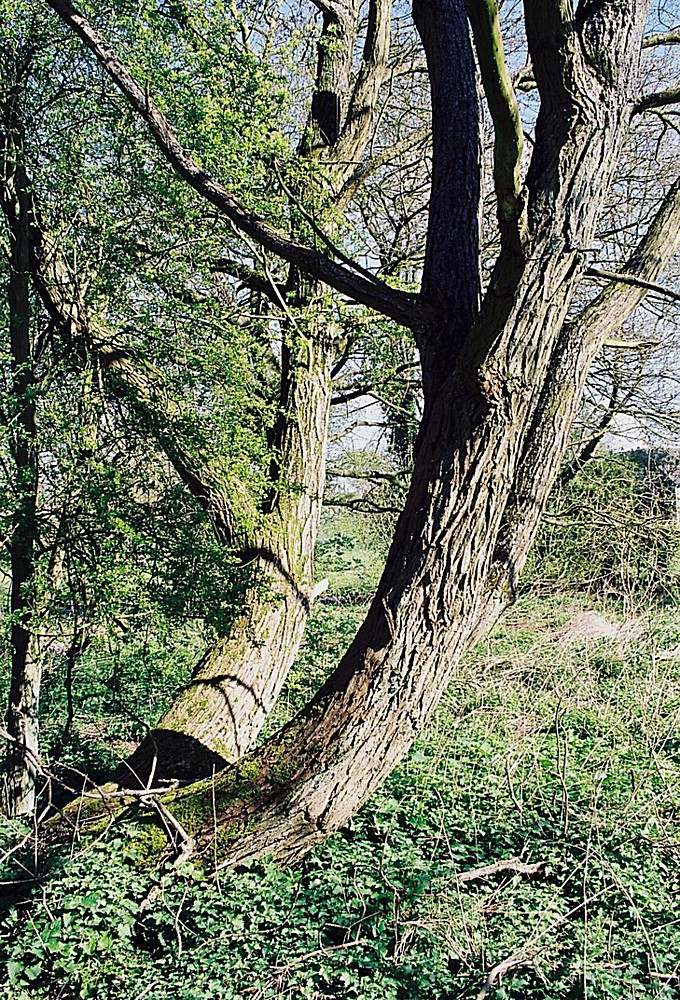 The title pictures show goat willows at the Donkey Field in the 1990s and the 'chainsaw man' finishing off these substantial trees after their felling. Quoted elsewhere but let's hear from James Lovelock again ... "The chainsaw is an invention more evil than the hydrogen bomb". I don't know about that but I do know that a high-pitched screaming chainsaw creates a feeling of intense unease as do remote, predatory developers whose sole interest is fat profits at the expense of the local environment and local people. So we come to the latest, speculative development proposal for the Donkey Field from a company by the name of Summix - see the July 2018 article below. Note that development news prior to 2018 may be found in the parent webpage Westwells/Neston and many pictures of Donkey Field destruction in 1998/9 and 2002/3 may be found at Localities/Westwells/Donkey Field destruction here Donkey Field destruction.

10th February 2021 and apologies for the extended news gap on the proposed Donkey Field development. Those 'in the know' will appreciate that much has been going on behind the scenes as the speculative developer Summix through its agents HD Town Planning and Marrons Planning, appealed Wiltshire Council's refusal of planning permission and the issue, as with the Redcliffe, Park Place development (see Bradford Road News) and the Stafford/Gladman 'Land north of the A4' Pickwick proposal (see Pickwick News), has been placed in the hands of the Planning Inspectorate. Apart from the representations made at the time of the planning application, further representations have been made by local people direct to the Inspectorate in the form of  'statements of truth'*. The Neston Action Group's rebuttal of the appeal includes much historical information which may be found in the .pdf file here:

The formal start date of the appeal was 27th April 2020 but the actual appeal hearing (an online 'virtual' session) took place over two days, 8th and 9th February 2021, with arguments being put by both sides (representatives of Wiltshire Council and the appellant). A third-party (unofficial) summary of the proceedings follows:

*The 'statements of truth' may be found within the documents Third Party Comments, the first of which, dated 30th June 2020, is on Wiltshire Council's planning webpage for application 18/09884/OUT along with other relevant documents associated with this application.

7th October 2019 and planning application 18/09884/OUT has been refused by Wiltshire Council planners (in their refusal notice dated 20th September 2019) for four principal reasons: 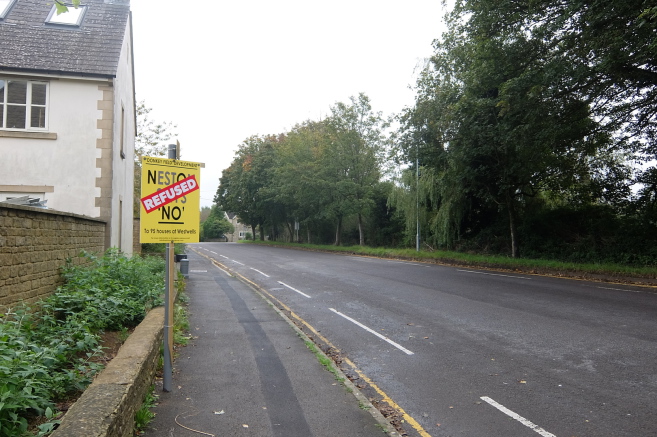 Interesting that the refusal notice includes in its arguments, in relation to housing supply, that 'the indicative remaining requirement for the Corsham Community Area (CCA) remainder is 0. This proposal is not required as part of housing supply'. However, the fact that no more development is required in the CCA (outside Corsham Town) is not given as one of the reasons for refusal! Perhaps this is because this state of affairs has been extant since (even before) the publication of the Core Strategy in 2015 and could and should have been used to refuse the Bellway, 88-home, greenfield development at Rudloe. Even now, the GreenSquare housing association is in the early stages of a so-called 'Rudloe regeneration' plan which would bring scores of unrequired new homes to the original Rudloe Estate, increasing density and bringing about the demolition of Rudloe Community Centre which was completed only in 2002 at a cost not far short of £1 million!

Many good arguments against the Donkey Field development have been made by Neston locals such as Tim Awmack, Charlie Graham and Fiona Hutter. But it should not be forgotten that similar arguments should have been made, and should continue to be made, against other local developments which involve the loss of green fields and community facilities and which will see housing density increase but with no additional services proposed. Even now, a Rudloe mother with a child who started school in September could not be offered a place at Rudloe's school so, being an ardent Green activist, has to cycle to Atworth with the child every day.

11th November 2018 - the expected, speculative planning application for the Donkey Field has been lodged with Wiltshire Council and has received the designation 18/09884/OUT. The deadline for representations on this application is 29th November 2018. Below the following photograph of the Donkey Field at the turn of the century there is a file 'link' to the comprehensive objection from Neston Action Group to this speculative application. 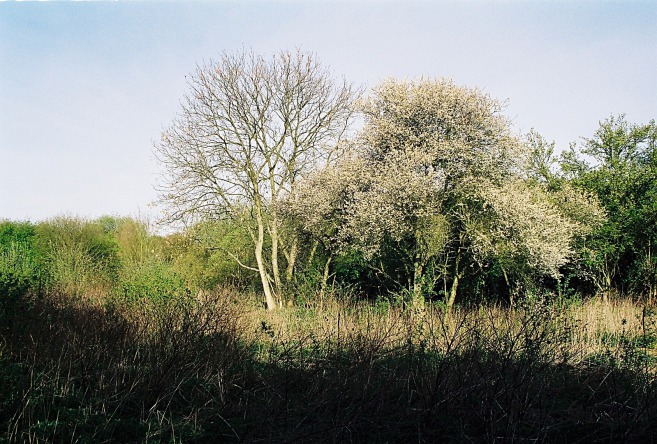 The Wiltshire Council documentation for the planning application may be found here: 18/09884/OUT. The application form itself doesn't fill the reader with any confidence as the true applicant's name and address are not given (the agent's name is given with an address of 'Land south of Westwells Road!). One wonders what the applicant has to hide. Also, the application documentation leaves much to be desired; it is extremely 'thin' and disorganised. For example, the supposed 'Transport Doc Part 2' contains nothing about transport ... and there is no Part 1! Wiltshire Council's Drainage Engineer has recommended 'object' (rather than 'support') in his report here: Wiltshire Council's Drainage Engineer report as there are many significant drainage questions which have not been addressed in the documentation.

The following photographs show some of the agricultural land that will be lost to Summix's projects.

Speaking about the 'UK Climate Change Risk Assessment 2017' programme, Defra minister Lord Gardiner said: "Our changing climate is one of the most serious environmental challenges that we face as a nation and that is why we are taking action, from improving flood defences across the country to securing our critical food and water supplies". Daft question but how can we secure our critical food supplies if we continue to build on agricultural (and potentially agricultural) land? In west Corsham alone, greenfield developments (Redrow, Redcliffe, Bellway) are swallowing up more than sixty acres of agricultural land. At the Rawlings Green site in Chippenham, mentioned above, 124 acres of agricultural land will be lost. This state of affairs, we know, is being repeated across the country with many tens of thousands of acres of agricultural land being lost to development.

A number of public rights of way cross the Donkey Field. These were fought for, long and hard, at the turn of the century principally by Jeanne Doohan. These rights of way are shown in the following map - the principal, cross-field path without a label is CORM135 (Wiltshire Council will amend the map).

The CAN is important because it: • provides attractive routes away from roads both in the countryside and within towns  • helps Wiltshire’s residents keep physically and mentally healthy • forms a significant part of our heritage • enables people to enjoy the beauty and tranquillity of large parts of the countryside that cannot be reached by road • can be a wildlife habitat or provide green corridors’ between areas of habit

Including rights of way within a tarmac and reconstituted block development flies in the face of these aims; who would want to exercise their 'right' by walking through a modern estate? A map of the proposed development is given below with the rights of way indicated by dotted lines. 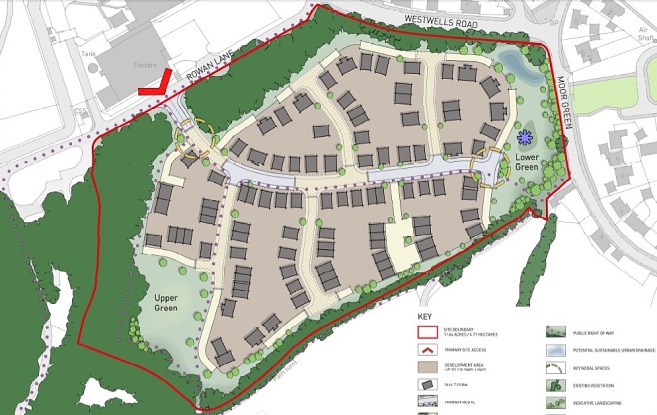 The 'full' development proposal, including the map shown above, may be found in the following file:

There are a number of factual/historical inaccuracies in this document but 'we' won't provide the speculator with ammunition by detailing them here (not that there's much chance of remote developers chancing upon this website). The photographs below show the Donkey Field in all its glory on 7th July 2018. 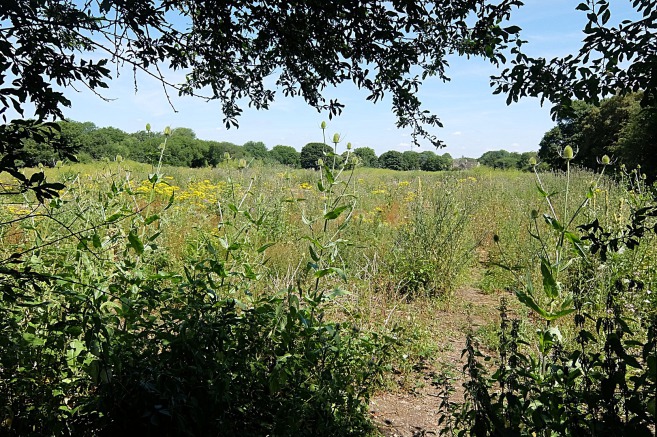 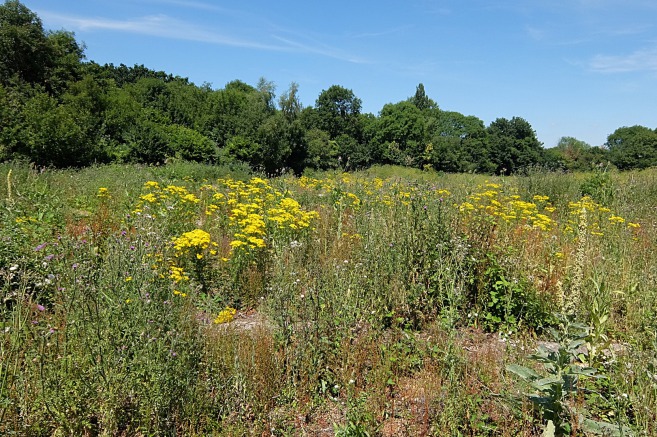 The Donkey Field with Rowan Lane trees beyond; thistle, ragwort and great mullein, or Aaron's rod, much in evidence here 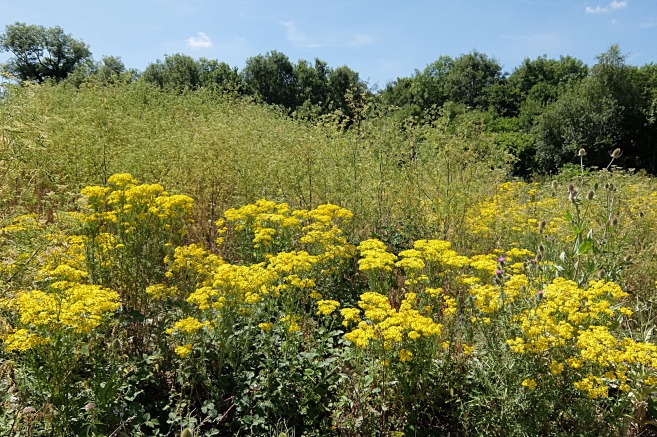 'Summer Gold' ragwort with a stand of hedge parsley behind. 'Summer Gold' as this was the description given by a West Country farmer who used to sell it with such an appellation in his farm shop ... a tasteful vase of ragwort on the sideboard anyone? 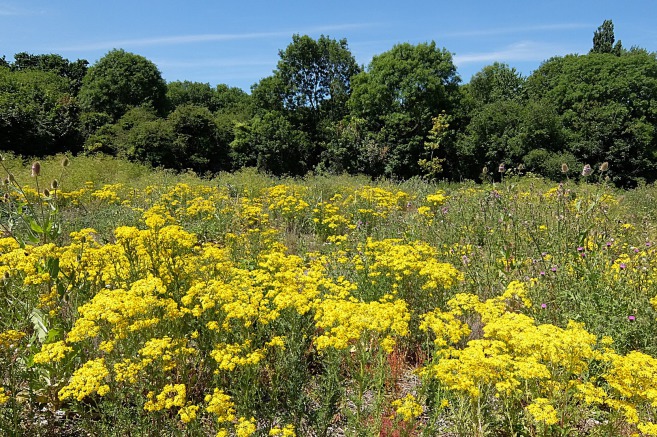 More 'Summer Gold' with the goldfinches' favourite, teasel, beyond. 'Teasel' as the spiny heads teased out separate fibres of wool before spinning. 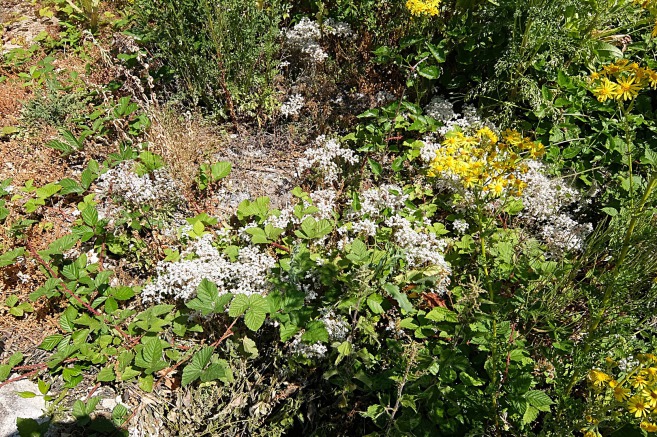 White stonecrop (sedum album) which is, apparently, fairly uncommon but it is prolific in the Donkey Field 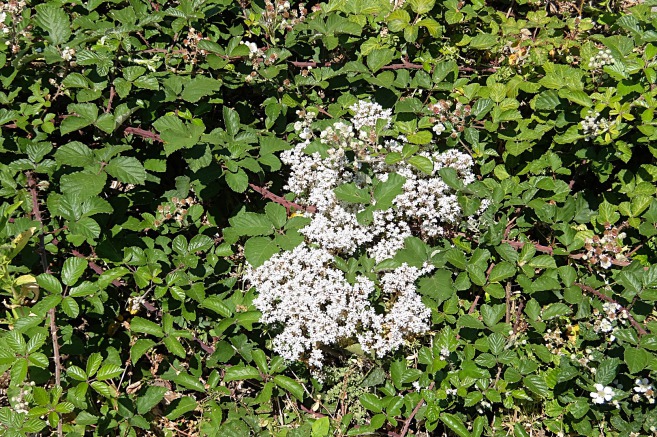 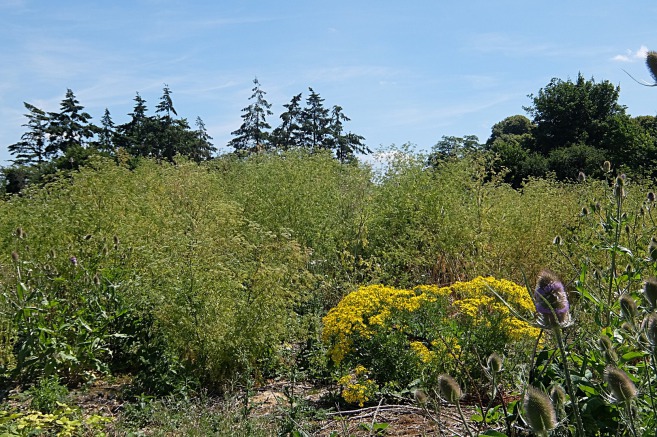 Here we have teasel, ragwort and a grand stand of hedge parsley with the conifers of Moor Park behind 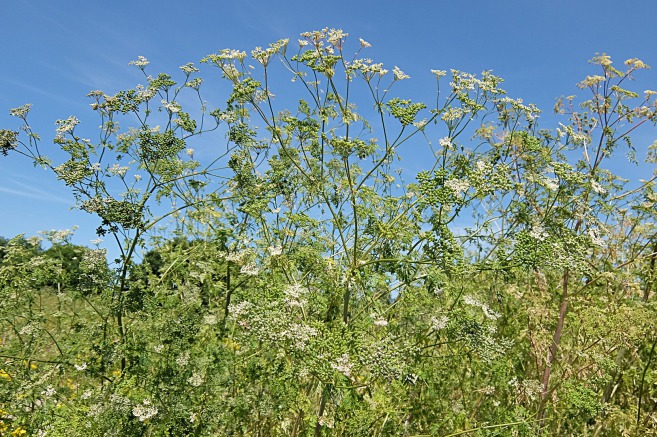 The flower heads of hedge parsley (Torilis japonica); as may be seen in other photos, this is abundant in the Donkey Field 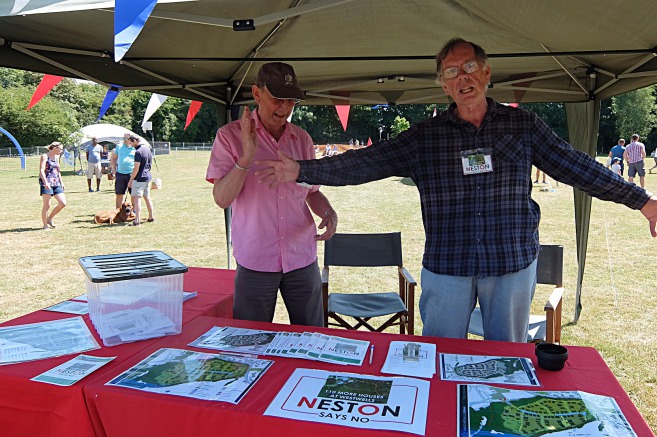 The 2013 Corsham & Box Matters article, to be found through the button below, remains relevant although, in the case of the Donkey Field, it is the landowner and not a local farmer to whom we may attach the appellation 'tyrant'.