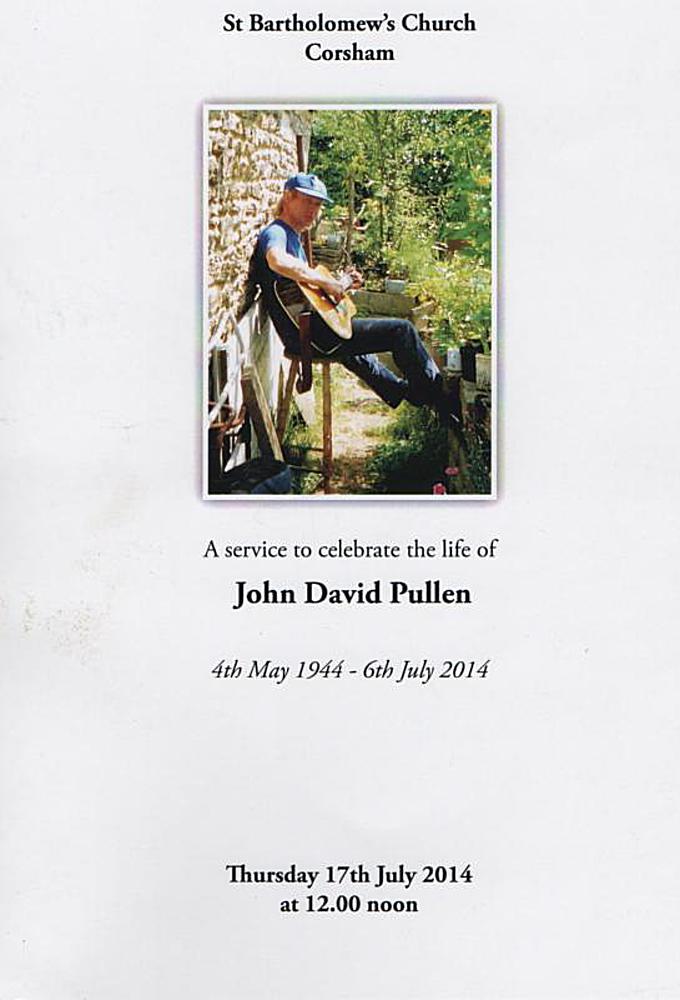 Eulogy for John by Geoff Fry

A fitting background against which to talk a little about a quiet man.

For what better way is there to describe John ... quiet, gentle and unassuming.

Easy to be around, unless, of course, you were looking for a heated discussion

This quiet life began on 4th. May 1944, just down the High Street, from where

we are now, in what was the Corsham Nursing Home.

Then, to the family home in the Hare & Hounds in Pickwick Road, where John

lived with his parents and his two, older sisters Jeanne and Phyl.

Spending the first 22 years of his life in the Hare & Hounds, could well account

for John’s liking for a good pint of real ale ... though I’m told the same cannot be said of

‘real’ cider, which proved to be his downfall ... quite literally ... one Christmas in Southstoke

Cricket in the pub car-park ... with dustbins for wickets ... developed the young

muscles that would later carry John through countless running races, including

many Bath half-marathons and, ultimately, the London Marathon, every

runner's dream. And early music sessions in the pub lounge, with John and his pal Dave on

guitars and mate Mike on drums, set the scene for a lifelong love of music,

both listening and performing.

School, from where, aged 7, he went on to Corsham Council School and

then to Grammar School, in Chippenham.

He failed his French ... twice ... but did get pure and applied maths.

In my book that makes him a clever clogs - however, the Electricity Board

didn’t agree, so John had to pursue his second career choice ...

the Civil Service. He joined the MOD Naval Stores Depot at Copenacre and

stayed with the MOD right up until his early retirement in 2000, at the age of 56.

In 1967, John found himself back in Corsham High Street once again, little

of another important milestone in his life. Just as John was coming out of the

chemists with his Dad’s prescription, young Josie Fry was on her way to the

hairdresser with her sister Sherry who was getting married that very day.

Sherry knew John and introduced him to Josie.

As soon as he was out of earshot Josie told Sherry “I’m gonna marry him!”

After several sorties past the Pullen family home, now in Dickens Avenue,

call in. John and Josie’s first date soon followed and they were engaged two

years later and married two years after that, in August 1971.

An MOD posting followed almost immediately and the newlyweds upped

sticks for London ... the trendy venue for any young folks in the1970s

Josie loved it, but, ever the country boy, John didn’t. But what he did love was visiting

the various folk clubs and venues, to further feed his passion for music.

After this spell in the city it was back to the country for John and Josie,

firstly to a cottage in Southstoke and then, in 1976, to Lilac Cottage in

Lower Wadswick, where they resided ever since.

As we all know, living in the country and close to nature was part of what

made John tick, it was the place where that ‘quiet man’ felt most at home ...

In his garden, on his allotment, walking the fields, mending dry stone walls,

or riding his beloved horse Barnaby. Which brings me very neatly to the point

Living as I did in Neston, I would often see this raggle-taggle retinue of horses

pass by the cottage window ... biggest at the front, gradually diminishing to

a pip-squeak Shetland pony, bringing up the rear.

This was, I discovered, John, his sister Jeanne, brother-in-law, Johnny, all their

horses and ponies and assorted helpers and hangers on. Having a small

daughter who was keen to learn to ride, the deal was soon done and Jenna,

my little girl, took her place on Poppy, the tiny pony at the tail-end.

Later, I found myself running alongside John in the newly-formed Neston

Running Club or bumped into him at many local races. As we talked more,

and ‘sang a bit’. He even mentioned that he had been in a band, back in

the 80s. Fronted by an Elvis impersonator, the band had actually been paid

for a gig and John still had the 10-shilling note in a frame.

How rock’n’roll was that for a quiet man!

As a founder member of the acoustic music club in Corsham ...

‘Folk at the Oak’, as we first called it, I had tried on many occasions to get John

to come along and play at one of the weekly ‘sing around’ sessions.

Eventually he came, but ‘just to listen’. Week in, week out I would nag him to

bring his guitar. No, he didn’t think he could, he wasn’t good enough ...

ever modest, ever self-effacing. Eventually he took the plunge and the rest

He played and sang on a regular basis, often treating us to his own

hares, the Box Revels and harvest time. Or he would sing songs by his

to name just three. Oh, and as for ‘not being good enough’, I’ll tell you,

this country-boy picked a mean guitar! If only he hadn’t played so quietly!

With his knotted kerchief and his flat-cap and his country-inspired songs,

two of his favourite books.

Two of John’s other abiding interests were Wolverhampton Wanderers ...

fascination in a man who hated flying. Last year, to mark his 69th birthday,

Lancasters, something which, despite his ill-health, gave him a tremendous

thrill. Thankfully Josie didn’t save this event to mark John’s 70th, as he would

have been too poorly to make the trip.

but you know, I don’t think this applies to our John. Sure, he had every right

to be angry at the turn his life took a couple of years back, when illness took

its hold and began to take its toll. He could well be bitter that his three score

years and ten were so precisely allocated, with not even a little extra time for

good behaviour. But I don’t think John would rant and rage against the

unfairness of it all. I think he would just smile and keep his counsel and keep

his thoughts to himself. At most he would probably write a song about it.

This may be due, in part, to his faith, but I think it is simply down to the fact

that he was just a quiet, gentle, considerate man. A good man. A man who

cared. A man who regularly supported charities for those less fortunate ...

like a Child in India, or ran to raise money for Guide Dogs for the Blind and

And I can’t help but feel that this noisy, frantic world would be a much nicer

place if there were a few more ‘quiet men’.