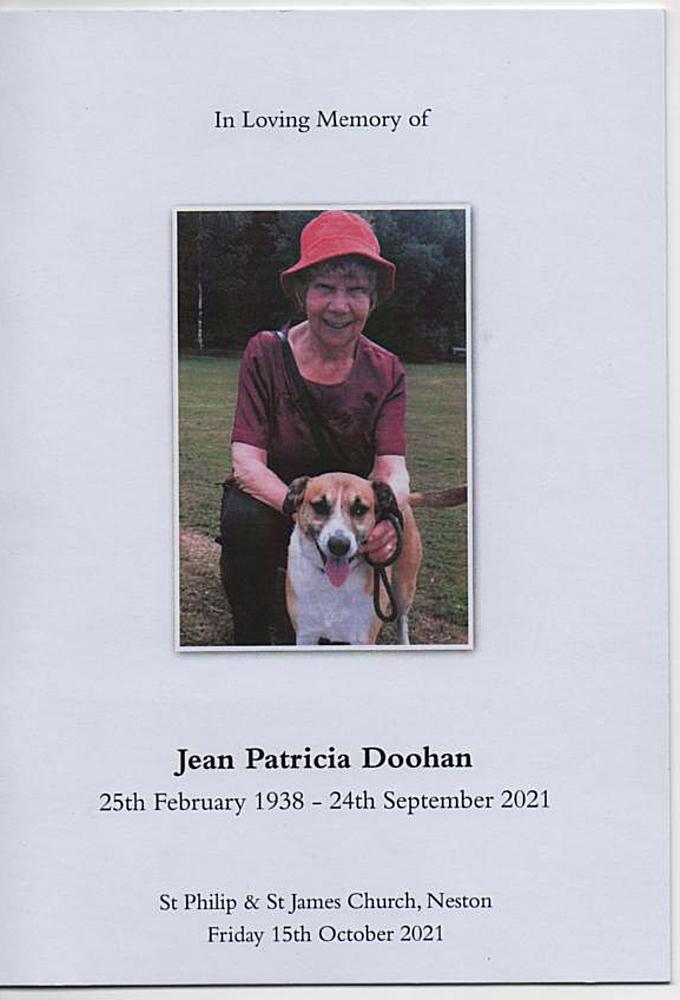 Eulogy for Jean by Geoff Fry

Saturday 25th, a sunny, September afternoon... I went in from the garden to find the answer machine flashing. The message was from Johnny Doohan, telling me that Jeanne had passed away and could I write something for her funeral, as I had for her brother John.

I went to Westwells to offer my condolences and assure a very distraught Johnny that I would be honoured to write a eulogy for Jeanne. No problem.

Except, of course, there was a problem, as there often is in such a situation...

On the one hand, of course I knew Jeanne... I’d known her for some 40 odd years. On the other hand, I didn’t really know Jeanne at all.

So, to begin at the beginning...

Jean Patricia Pullen entered this world on February 25th, 1938 in a Bristol nursing home - and her first home was the Pullen family hotel in Stokes Croft, where she lived with her parents and older sister Phyl. The following year saw the outbreak of the Second World War and, a year later, that war came to Stokes Croft with a bang! - quite literally, as the family home became one of some 89000 Bristol buildings which were bombed. Luckily no one was injured and the Pullen family fled to safety via the cellar.

Left homeless and with no income, Jeanne’s dad approached Fussells, the brewery which had owned the hotel, and was employed as a lorry driver... giving the family some financial security and a home at Rode. A year later, he was offered the position of manager of the Hare and Hounds, in Pickwick Road, Corsham and once again the Pullen family had a secure and happy family home. Three year’s later, the family was completed with the arrival of Jeanne’s younger brother John, in Corsham Nursing Home.

(According to Josie, Phyl, Jeanne and John were all born on brewery delivery days... which is why all of them were incapable of ever closing a door!)

After Miss Bailey’s, Jeanne had a brief spell at Corsham Comp and the on to Chippenham Grammar School... known today as Hardenhuish. As she entered into her teens, Jeanne developed two passions that were to stay with her throughout her life... the first of these was cricket. She later played for Corsham Ladies and later still realised her dream of visiting to the Oval to watch England play West Indies. Whilst a love of cricket might come as a bit of a surprise, Jeanne’s second love was just what you might predict for a lively teenage girl in the mid ‘50’s... Rock and Roll, dancing and, more specifically, Mr. Presley. John may have been married to Jeanne for 67 years, but there was always this other man in her life! Her favourite Elvis song was ‘All Shook up’... something here adversaries often felt when they crossed her path at council meetings, later in her life!

With school days finally behind her and her exams succesfully completed, Jeanne left to seek employment and spent the next few years happily working for a Chippenham solicitor. Eventually, lured by the better pay and job security offered by the civil service, she joined the MOD, as a shorthand typist at RAF Rudloe Manor, working her way up to Admin Officer, involved in ‘hiring and firing’... or HR as we like to call it today! Jeanne also joined for the Royal Observer Corps, involving the identifying, tracking and reporting aircraft in the skies over Great Britain. The war was over, but the ROC survived until 1995.

However, before very long, young Jeanne Pullen’s involvement with the RAF was not confined solely to working at Rudloe Manor... Her passion for dancing to rock ‘n’ roll music took her out to various local venues and, strutting her stuff in the British Legion Club... later called The Flamingo... she caught the attention of a dashing young RAF wireless officer, with a soft Irish lilt and a twinkle in his eye. The rest is history... a brief courtship, a marriage in 1960 at the Corsham Catholic Church and 61 years of happy married life.

Johnny and Jean’s first home was a modest flat above Pickwick Papers... ( now the Londis store ) followed in 1961 by a move to a bungalow in Boxfields, for 16 bob a week rent!... then around 1963/64, the move to the bungalow in Westwells, where they have remained until the present day.

And it is here, in that bungalow, that they became that institution known as ‘Johnny and Jeanne’... part of the fabric of the village, known to so many people, for so many different reasons. As I mentioned earlier, my own involvement with Johnny and Jeanne goes back some 40 years...

New to the village, in 1978, I was immediately caught-up in a fight to save the now famous ‘Donkey Field’, from the hands of greedy developers. A group of us formed Neston Action Group and there, right in the middle of the action, was Jeanne, always active, always ready to stuff fliers through letterboxes and do whatever else she could to fight for village preservation. She later became Councillor Doohan and was a feisty and formidable fighter for the preservation of Neston.

Every village needs a Jeanne Doohan!

Sadly, it seems the Donkey Field battle may finally be lost. I’m kind of glad Jeanne isn’t here to see it.

Donkeys lead us nicely onto ponies... Jeanne had always wanted a pony. As a little girl she rode her stick pony around the Hare and Hounds car park, but never got to own the real thing Her dream only become reality after she married, when she and Johnny bought horse number one... Shamrock, ( but only after Jeanne had made Johnny act as test-pilot! ) Next came Poppy... then pregnant Bonny, who produced Barney... then came Kissy... I think you probably get the picture! They were all stabled at Johnny and Jeanne’s ‘equestrian centre’ near the top end of Spring Lane and were frequently seen in procession around the village, especially on a Sunday morning. I’m told there were only five horses, but I always had the impression it was many more... John Pullen up front on big, old Barney, then Johnny and Jeanne and horses decreasing in size until Poppy, the tiny, white Shetland, brought up the rear - usually piloted by an equally tiny person! With a little help from Jeanne, Poppy must have taught half the youngsters of Neston to ride, including my own daughter.

From horse-shoes to running shoes... I wonder how many of the members of the now well-established Corsham Running Club realise that the club’s humble origins stretch right back to the Neston Institute and informal runs organised by Jeanne and Johnny and friend, Brian Gibb and involving a few other keen participants like John Pullen and myself. Not that Jeanne’s running was confined to the narrow lanes around Neston... she completed the London Marathon twice! No mean feat!

Jeanne’s sporting involvement also extended into the ‘It’s a Knockout’ contest, held on the recreation ground, wherein Neston took on teams from other villages, in a variety of tests of strength and skill. We did, of course win. Pretty impressive given that one of the participating ‘villages’ was the local military! With Jeanne involved, how could we have failed?

Sadly, however, as her own health started to decline with the onset of Alzheimer’s, and it was Jeanne herself who needed the care. Firstly at home with Johnny and then, eventually, into specialist facilities... the last of which was the Ferfoot Residential Home, in Chippenham, where the staff took such excellent care of Jeanne right up to her final days.

Alzheimer’s is a terrible disease, not least because it robs us of people twice over. So Johnny lost his feisty, rock ‘n’ rolling girl some time ago... well before she finally passed away on Friday 24th.

What he hasn’t lost though, are the memories of all the good times they shared... the first time he set eyes on Jeanne on the dance floor... riding his motorbike with Jeanne and her dog in the sidecar... heading up to Gloucester to buy Jeanne her dream pony... watching Jeanne with the bit between her teeth as she swung into action to save the village...

As for the rest of us? Let’s make sure that the spirit of Jeanne Doohan lives on within the leafy lanes and byways of Neston and inspires others to stand up and fight for the things that matter.

Most of all, lets all follow Jeanne’s example and be kind when we can. It doesn’t cost anything and it can make a difference.