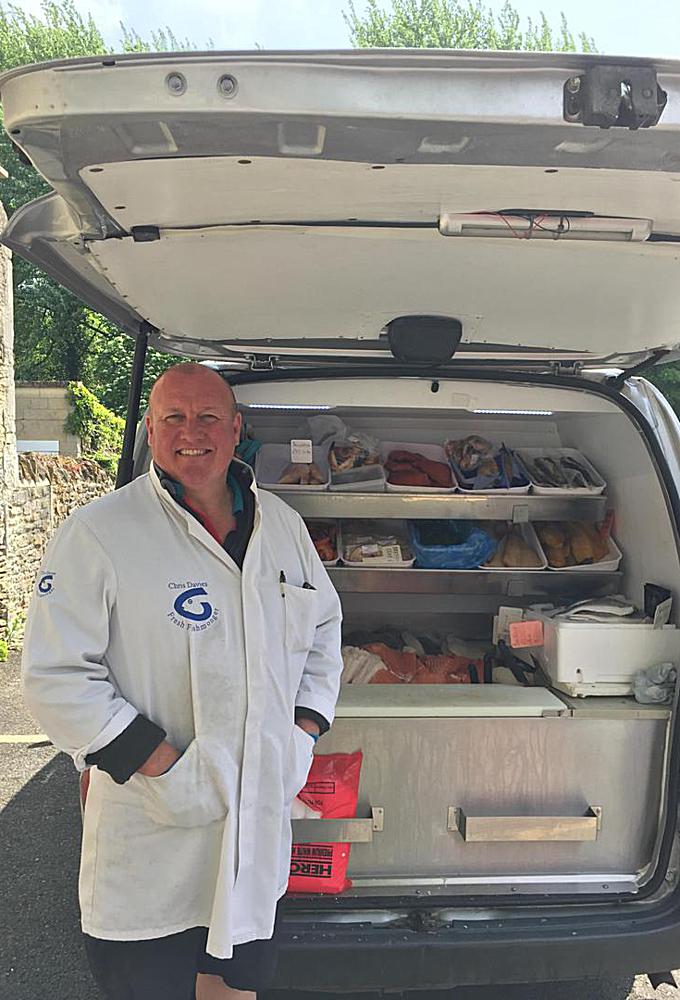 Here's the Grimsby fish man, Chris Davies, who we find in Corsham's Royal Oak car park every Tuesday. Who would know that he was the British two-man bobsleigh champion in 1990 and Olympic squad member from 1990 to 1994. Chris competed for Great Britain from 1986 to 1994. 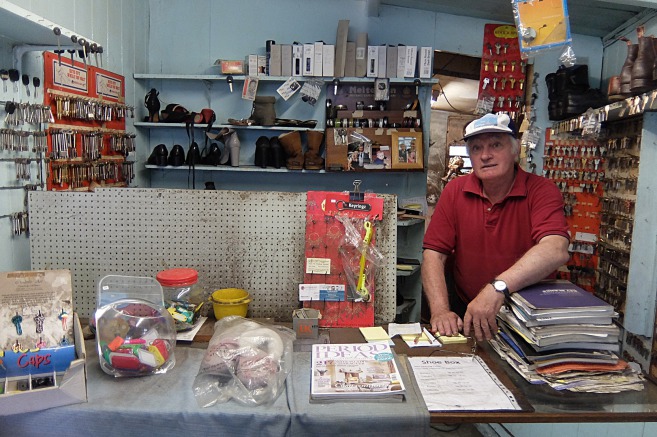 And here we have David Turner of the Shoe Box (shoe repairs/key cutting) in Sheldon Road, Chippenham. According to many, David was the best player who never played for England. He played 426 times for Hampshire in the 60s, 70s and 80s usually at no. 3 and notably in the 1970s when Barry Richards and Gordon Greenidge were openers and Hampshire won the County Championship (1973) for only the second time. David also played for Western Province (South Africa) in season 1977/78.

David scored 19,000 runs during his first-class career and made 1,000 runs in a season on nine occasions. He was also incredibly fleet of foot and was a marvellous performer in the field. Further information may be found on Cricinfo here: http://www.espncricinfo.com/ci/content/player/21617.html

Sidney Alford, 11th January 1935 - 27th January 2021. The photo below shows the knocker on Sidney's front door in Pickwick and the obituary of this remarkable man, from the Times of 20th February 2021, is further below. 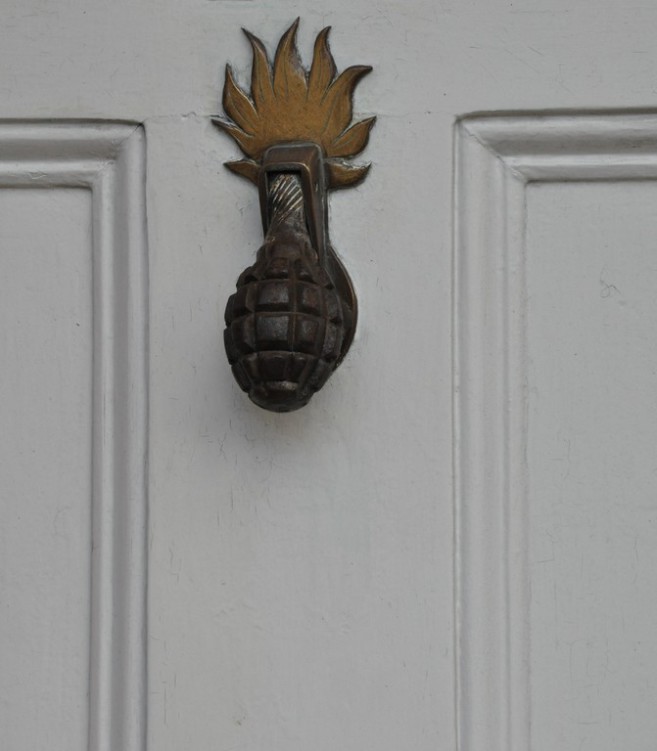 Sidney Alford took up skydiving in his fifties. He started learning Russian in his sixties, and German in his seventies. But his real passion, the one that he acquired as a schoolboy and pursued almost all his life, was blowing things up.

Self taught, non-conformist and contemptuous of “pointless rules and regulations”, he invented and developed, first in his garage and later in a Somerset quarry, all manner of explosive tools to destroy the mines, bombs and improvised explosive devices (IEDs) of terrorists and other enemies — tools rejoicing in names such as the BootBanger, the Bottler and Krakatoa.

A British establishment of which Alford was emphatically never a part did not always appreciate his creative (and destructive) genius, especially in the earlier years of this somewhat combustible character’s career.

When he was 41, and just hitting his stride, the Royal Armament Research and Development Establishment refused to employ him on the grounds that he was too old to have original ideas. The Royal Military College of Science blacklisted him for “teaching young officers things about explosives that they are not supposed to know”. Yet as the decades passed Alford came to be seen for what he was: one of the world’s leading experts in explosive engineering.

The British and US militaries employed him to find ways of neutralising IEDs planted by the Taliban in Afghanistan, and by Islamic jihadists in Iraq and Syria. Documentary makers turned to him to recreate events such as the Dambusters’ raid, or the anniversary of the Gunpowder Plot (for the latter, he blew up a life-sized replica of the Palace of Westminster).

He carried on working well into his eighties, though by then he was fairly deaf from all those bangs. “I enjoy blowing things up too much to do otherwise,” he said, not unreasonably.

Sidney Christopher Alford was born and raised in Ilford, Essex, in 1935, the son of a First World War veteran who then worked as a clerk for Shell for 45 years. His interest in things that exploded began during the Second World War. After a brief evacuation to Bournemouth, where he witnessed a Stuka strafing a shopping street, he would huddle under the stairs with his mother as the Germans bombed east London by night. By day he would visit the bomb sites and, if lucky, find unexploded magnesium alloy incendiary bombs from which he made fireworks. He once found a V1 flying bomb engine in Epping Forest.

After the war he developed a love of chemistry at Buckhurst Hill grammar school and was spanked for detonating rolls of toy caps in the locker room. He also put bangers made of nitrogen triiodide under his French teacher’s chair.

Alford went on to Southampton University, but failed his first-year exams and instead did two years’ National Service as a radar technician. Thereafter he enrolled for a general science course at South West Essex Technical College, but failed that too because he was poor at maths.

Despite that unpromising start he was offered a research job at the University of Paris after a chance meeting with a chemistry professor named Charles Mentzer in the early 1960s, and, with no first degree, ended up earning a doctorate on the chemistry of plant products.

Mentzer recommended Alford to a chemistry professor he knew at the University of Tokyo. Alford stayed there for a couple of years and added Japanese to his growing portfolio of languages. He also met Itsuko Suzuki, whom he married in 1970 and with whom he would later have two sons: Roland, now managing director of the family firm, Alford Technologies, and Xavier, a documentary film-maker.

Back in Britain he struggled to find a proper job: he studied fatty acids in the brain at the Nuffield Institute and acted as an interpreter when Emperor Hirohito visited. It took the eruption of the Troubles in Northern Ireland to reignite his interest in explosives. Working in the garage of his house in suburban Ham, west London, he invented “water-lined shaped charges” — explosive charges that generated 3,000mph armour-piercing jets of water — to destroy Provisional IRA bombs.

He left his car running in the hope that neighbours would think it was backfiring whenever they heard bangs, but to no avail. He was soon visited by two gentlemen from the security services. He explained his work, and instead of arresting him they put him in touch with the Ministry of Defence. The MoD arranged for him to continue his testing at its Pirbright range in Surrey, and subsequently adopted his pioneering technology for a variety of highly classified projects.

In the late 1970s Alford designed underwater charges to sever the well heads of decommissioned North Sea oil rigs and blew up three old blast furnaces in Co Durham. He blasted away the old iron penstock gates at the Royal Dockyard in Portsmouth and assisted in an operation that recovered gold ingots from the wreck of a cruiser torpedoed by U-boats in 1942.

By 1985 he had had enough of working for others. He set up Alford Technologies in Trowbridge and he finally came into his own. One of his first jobs was to salvage supertankers sunk in the Gulf during the Iran-Iraq war. He invented a form of linear cutting charge that he called Dioplex (“Do-It-Oneself Plastic Explosive”) to slice the ships in half while Iranian Revolutionary Guards watched from a distance.

Another early commission was to help Stanley Kubrick, the film director, to destroy an old industrial building in south London to create a set for his Vietnam film Full Metal Jacket.

Mostly, however, Alford invented devices for military use. He adapted his water-lined shaped charges for a variety of purposes, including the destruction of unexploded ordnance left in Cambodia and Laos after the Indochina wars, and in Kuwait after the Iraqi invasion of 1990.

Among his many other inventions were devices for destroying terrorist IEDs, limpet mines stuck to the sides of ships, the Bangalore Blade to blow holes in razor wire defences, the BootBanger for blowing open the boots of booby-trapped cars, and the Gatecrasher for punching holes in walls in hostage situations.

Army officers from around the world visited his quarry in the Mendip Hills to watch him demonstrate his devices or take his courses. “I teach dirty tricks so they don’t get caught out by them,” Alford told the New Statesman. The Americans were particularly keen on his services, the British a little less so because, said his son, he had “put a lot of noses out of joint” with his plain speaking.

Alford was disdainful of authority. In 1996 he was prosecuted for repeatedly refusing to install an expensive alarm on his store of ammonium nitrate. A judge at Swindon crown court fined him £750 but, perhaps sensing he was dealing with a useful maverick, ordered the police to return his licence.

23rd February 2021 - there was a further piece on Sidney in the column Lives Remembered in today's Times. This was from former Chippenham MP Sir Richard Needham (blimey, he is still with us; I'll never forget his description "That cow!" of Margaret Thatcher). Sir Richard writes:

'Sidney Alford was one of the most engaging and eccentric of my constituents. He was always in trouble with the authorities. Once, after I had taken him to see David Trefgarne, an MoD minister, to try to help procure him royalties for an invention the MoD were threatening to requisition, quite wrongly, without proper compensation, he asked me to dinner at his home. As we stood in front of his fireplace, I noticed two attractive figurines on his mantel piece. I was about to pick one up when he said: "Don't touch that for God's sake. It's made out of Semtex in case the authorities come round looking for explosives I need for my experiments!"'.