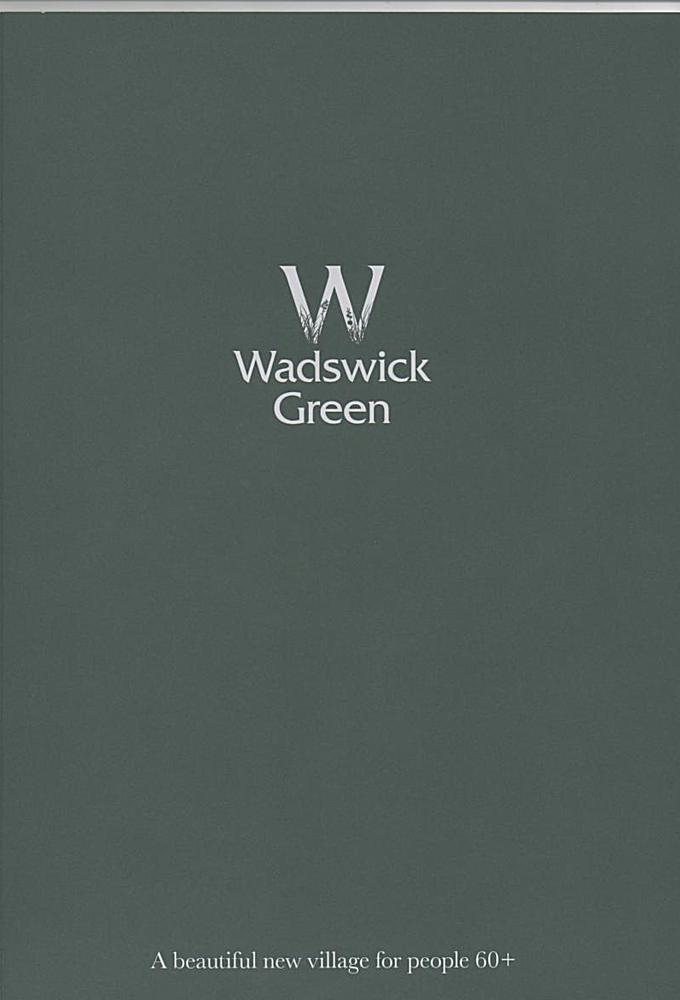 25th October 2017 - Indian summer on the Wadswick Green Pavilion terrace.Wadswick Green is well-established now and, importantly, is open to non-residents. I would say that this is beneficial to all, residents and non-residents alike, as it enables valuable social interaction between the the two.

Further apartment blocks are under construction now but, on the evidence of my 30-minute sojourn on the terrace, noise and disruption are being kept to a minimum. 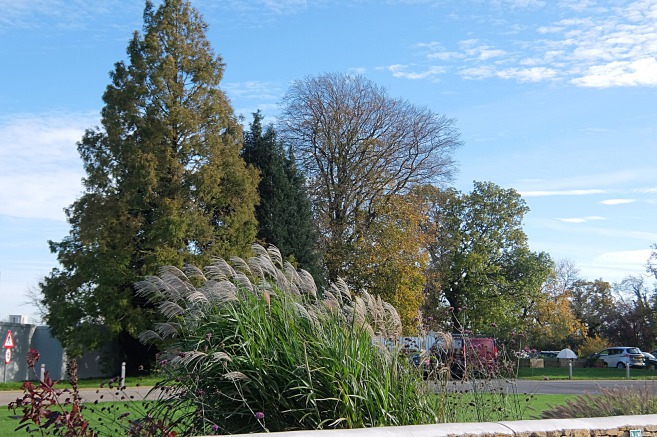 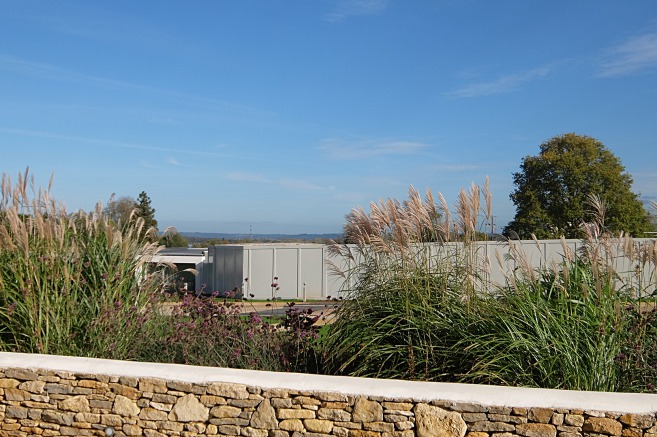 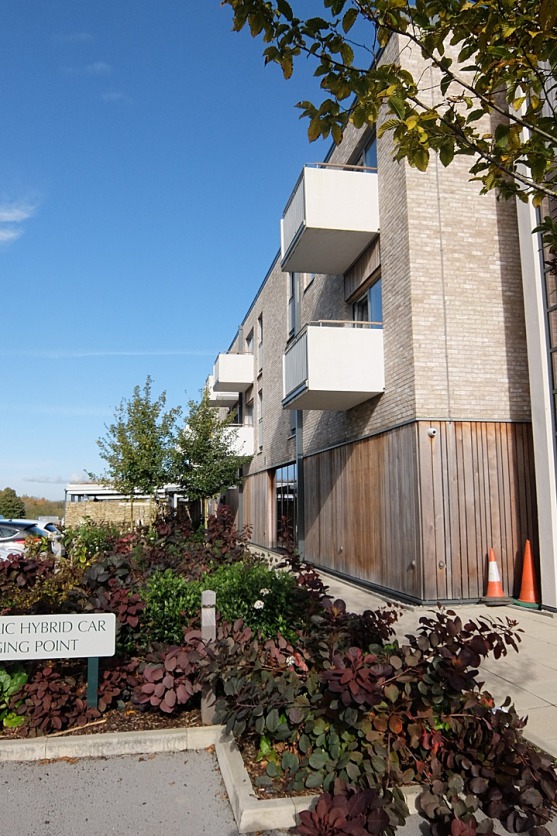 Back of the Pavilion on a lovely autumn day 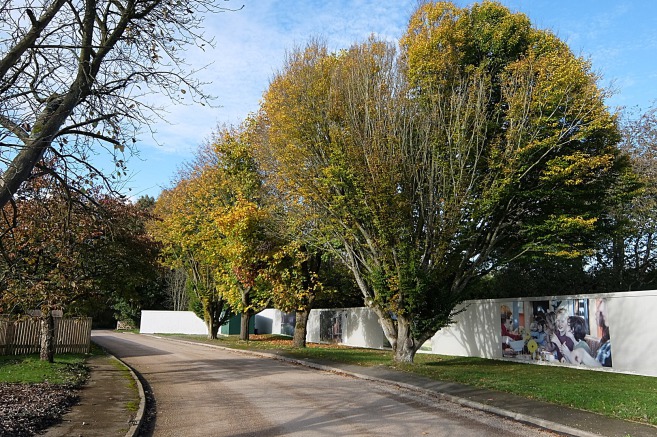 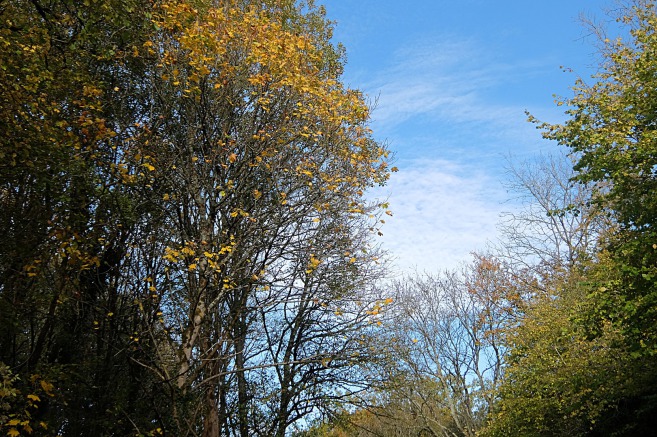 Treetops at the Westwells Road entrance to Wadswick Green 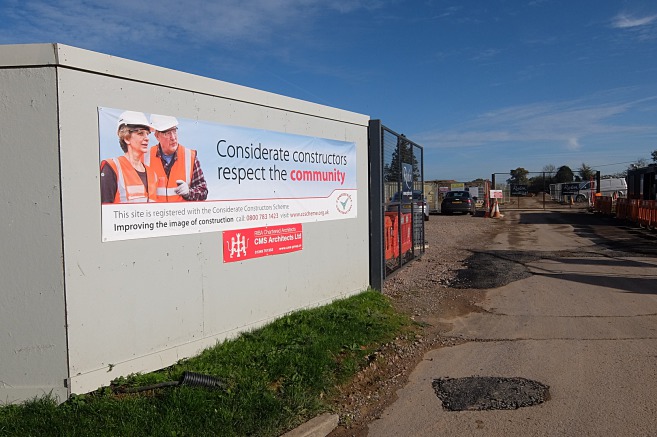 The quiet (during my visit) building site at Wadswick Green 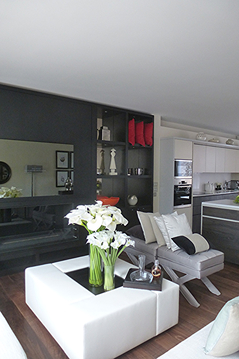 Following a 'welcome' dinner party last Friday for a dozen new residents, the first four apartments in Rowan Lane will be occupied this coming week.

Further Rowan Lane courtyard apartments will become available for occupation over the course of the summer; a phased development will see the whole site occupied by end-2016.

It seems that residents will have any and every need catered for by the concierge team headed by Jose, the general manager. Following the ethos that Wadswick Green will be part of the local community, services, such as the spa, will also be available to non-residents at certain times. I look forward to wining and dining in a location where I played squash and football in a former life!

The photo is of the on-site 'show' apartment in Rowan Lane. Other photos follow:

The 20th September 2014 article, below, discusses planning application 14/04012/FUL 'A new access road to Wadswick Green'. Paragraph 04.7 'Sustainability' of the Design and Access Statement from CMS Group dated 14th April 2014 states: "The surface of the roads are to be Breedon gravel which is a porous material and will aid drainage from the road. It is a natural product and does not require any artificial products as its (sic) self binding. The products used within the design of the access road have been chosen to have a low visual and ecological impact on the landscape and surrounding area". Further, the Revised Design and Access Statement dated 20th June 2014 confirms (in paras 04.5 and 04.6) "The surface of the new road is to be made up of self binding Breedon gravel with passing places every 100mtrs. The existing track leading to the dwelling will also be resurfaced using Breedon gravel. The appearance of the road has been designed to have a low visual and ecological impact on the surrounding landscape".

A typical Breedon gravel road is shown in the first photo below; the second photo shows the new Wadswick Green access road. Spot the difference?

This planning application was approved, subject to 10 conditions, condition 3 of which was: "No development shall take place on site until details of the proposed construction specification for the access road shall be submitted to, and approved in writing, by the local planning authority. The access road shall be constructed in complete accordance with those details approved. Reason: In the interests of highway safety and accessibility as well as ensuring the development is of a form that is appropriate to the rural landscape". 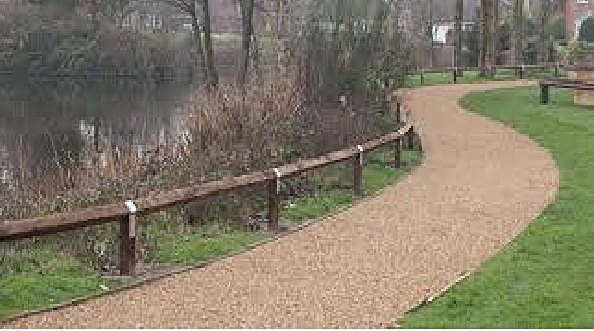 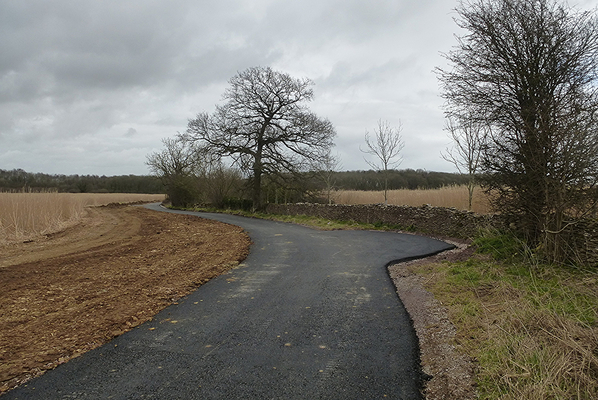 On asking an on-site worker today, 1st April, about the road surface, he said that it was not the final/finished surface! Hmmm - no doubt he took me for an April fool. The Breedon website states:

Can I lay Breedon Gravel on top of existing concrete or asphalt?

I rest my, open and shut,  case m'lud. The Wilts County Enforcement team is on the case - let's see how effective they are. 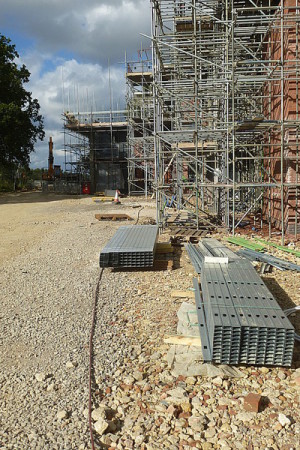 The Wadswick Green development will, no doubt, be eminently suitable for some elderly people but it certainly comes at a price. Current apartment prices are circa £285k, £360k and £490k for 1-, 2- and 3-bedroom apartments respectively and the prices are scheduled to rise in the near future. Apartment prices in the 'central' Pavilion are though somewhat lower, being at present, £205k and £245k for 1- and 2-bedroom units.

The apartments are 125-year leasehold so a ground rent of between £150 and £400 per annum is levied. And at the end of occupancy, residents (or their estate) are required to pay a 1% charge of the value of the property for each year of occupation (capped at 10%). So, for example, a couple having lived in a 3-bed apartment (with a value of around £500k) for 10 years would be required to pay £50k towards the maintenance of Wadswick Green for current and future residents.

As I said, it ain't cheap but Wadswick Green will have all the facilities, and more, that retirees may want. This, apparently, is what the future holds for our ageing population. 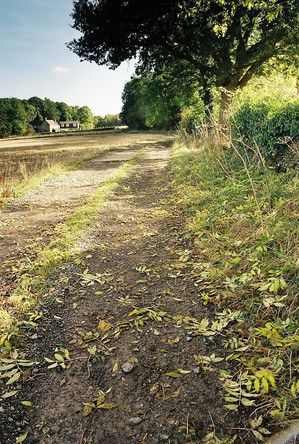 The developers of Wadswick Green have proposed a new, further entrance to the Wadswick Green development with the following raison d'etre given in the 17th September 'Report to the Area Planning Committee' ('link' below) : "It is understood that the primary reason for the creation of the second point of access is one of perception, with the applicant believing that the existing access via Westwells Road (being rather more defined in character by the surrounding business development) would not deliver the desired impression to residents and visitors to the Royal Arthur site as an exclusive residence".

Just as Rangeford (the developer) peculiarly hadn't appreciated that the principal, and originally only, entrance to Wadswick Green was in the increasingly industrialised landscape of west Corsham/Hawthorn/Westwells, I hadn't appreciated that prospective residents were to be screened for 'exclusiveness' - a 'No riffraff' sign is expected soon.

I fully agree with the Council Landscape Officer's assessment that: "the proposal represents non-essential development; loss of agricultural land; loss of existing trees and woodland; development resulting in unnecessary harmful effects to the local rural character of the countryside from new, urbanising road infrastructure ...  It is clear from the Council's landscape character assessments that only essential development, which is sensitively located, should be supported in this rural character area. I do not see how the benefit of the proposed development could be balanced to outweigh the resulting harm it is likely to generate". I have walked and enjoyed this rural byway for forty years (the photo above was taken towards the end of the last century) and fully agree with his assessment.

The Planning Officer's report states that the expected traffic load will be "light". For a whole village, its residents and visitors? The planned six passing places in this half-mile route indicate otherwise. And for me, the entrance/exit onto the B3109, whilst used at present for Wadswick Country Store traffic, is problematic. Drivers use this stretch as a racetrack - on my walks, I regularly see vehicles doing 80mph or more along here.

Notwithstanding all of the above, the Planning Officer has approved this second access road. However, his report contains inaccuracies - he says: "It is understood that a felling licence has already been gained and a break in Hunt's Wood has been created, it being wide enough to accommodate the planned new access track" and "The necessary break in the semi-mature Hunt's Wood has already been created thereby minimising impact from the development".

The above information is incorrect - the last photo, below, shows the point of entry of the new road into Hunt's Wood. There are a substantial number of trees here, most planted about twenty years ago (with subsidy no doubt) but there are also mature trees and, at the Wadswick Green end, some ancient hazel and elm (and perhaps other) coppice.

Further photos below give a feel for the rural nature of the byway. 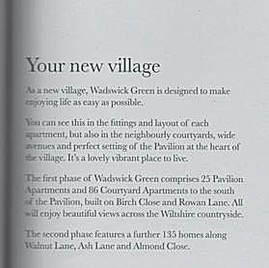 Village description from the brochure

A champagne reception in a marquee close to Wadswick Country Store marked the official opening of the Wadswick Green project. The project's great and the good were there along with MP James Gray who cut the ribbon for the project and the showhome (adjacent to the marquee).

The illustrative map in the gallery below provides an impression of the layout of the 25-acre site. There will be, apparently, 1-, 2- and 3-bedroom 'Courtyard' apartments and 1- and 2-bedroom 'Pavilion' (in the main village building along with village services) apartments.

The full village brochure is here: