Here is the first, Landscape, of four articles on Rudloe which idea was instigated by a request from the guest editor of the September 2020 issue of Box Parish Magazine. The other three articles will be People(I), People(II) and Politics. (The reader may find the text and maps clearer in the .pdf file included at the foot of the webpage)

The Wiltshire Landscape Character Assessment (WLCA) of 2004 specified as important 'views from the A4 at Rudloe'. The authors were not wrong. From the brow of Box Hill (from a single location if you position yourself carefully and bring some steps), the views indicated in the map below can be had. The first is along the By Brook Valley, across Bath to the Mendips; the second is to the escarpment of the Marlborough Downs and the area around Cherhill (White Horse and Lansdowne Monument); the third is to Oliver's Castle or Roundway Down at the south-western extremity of the Marlborough Downs and the fourth is across the Vale of Pewsey to Salisbury Plain. 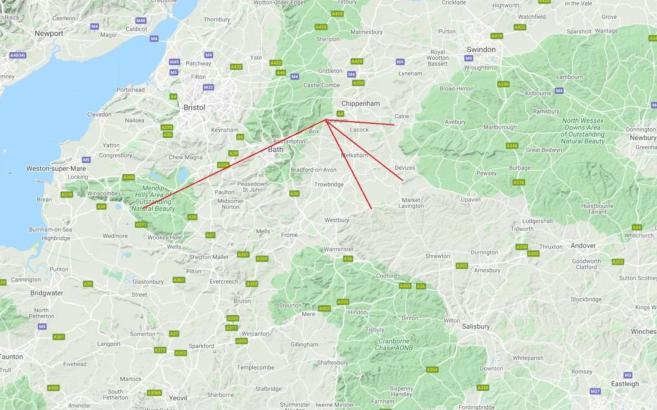 All will be familiar with the first view of the By Brook Valley which is framed by Kingsdown, Farleigh Down and Bathampton Down to the south and by Bannerdown and Lansdown to the north. This is the view that takes travellers' breath away when coming to the brow of Box Hill from the east. The By Brook is a tributary of the Bristol Avon but Pewsey Vale forms the drainage basin of the Salisbury Avon. This is quite remarkable really, that from a single viewpoint the surrounding landscapes of the tributaries of two rivers draining into different seas may be seen. And from this same viewpoint at the edge of the Cotswolds Area of Outstanding Natural Beauty (AONB), two other AONBs may be seen (or glimpsed in the case of the latter): the North Wessex Downs AONB (Marlborough Downs) and the Mendip Hills AONB.

Political points are hard to resist. The above-mentioned WLCA included ‘Important views should be protected and clear separation between settlements needs to be maintained eg between Corsham and Rudloe’. The prevailing imperative to build at any cost (pastures, views, communities, services) has seen the WLCA and other local plans disregarded.

From overground, let’s move underground. The geological map below is centred on Rudloe Community Centre which is now threatened with demolition (so much for the Rudloe community – apologies, another hard to resist political point). The light-coloured right-hand side of the map is, according to the narrative, ‘Forest Marble Formation – Mudstone’; moving to the left (west), the band that runs under Rudloe and Hawthorn is described as ‘Forest Marble Formation – Limestone’; continuing west, the next band (from Rudloe Manor to Box Hill) is ‘Chalfield Oolite Formation – Limestone, Ooidal’. All very geologically technical but as far as Rudloe is concerned, there are no quarries below. Brown’s Quarry (the balloons between Airbus and Bath ASU) and Tunnel Quarry (inter alia, three balloons on the innermost circle) lie to the south; Hartham and Copenacre quarries lie to the north and east and Box (Clift) Quarry lies to the west. Leafy Lane roughly describes the eastern extremities of Clift Quarry (a balloon lying on the inner circle indicates the sealed entrance to Cliftworks Passage Shaft 2 in the garden of Rudloe House). The balloon lying on the inner circle to the north-west is the site of the 19th-century Brewer’s Yard Quarry Slope Shaft at Rudloe Firs. Now, in 2020, a planning application from the Bath Stone Company for a new slope shaft and cutting yard for Hartham Quarry is proposed at Rudloe Firs. The multiple balloons lying to the south are various shafts and lifts for Spring Quarry. 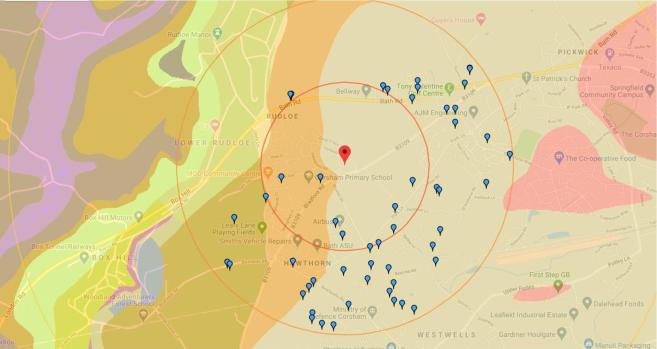 So, Rudloe remains an island in a sea of quarries, both old and extant. There is though a remote threat to Rudloe below ground as the permitted mine (green outline) and mineral rights (brown outline) areas shown in the map below encompass the original Rudloe Estate (formerly the prefab estate) but not the Leafy Lane estates. However, according to a local expert, the late, lamented David Pollard, any extension west of Hartham Quarry is extremely unlikely. In a December 2015 email, David said: “In theory they could dig under the whole of Rudloe, in fact the stone at the southern end of Rudloe is wedge bedded and broken ... so I think it highly unlikely they will be digging stone south of the A4 road”. This, by the way, is one of the reasons for the site of the newly-proposed slope shaft at Rudloe Firs, north of the A4; the working faces of Hartham Quarry are in the northern side of the quarry.

Other outlines on the map show the area proposed for the new slope shaft (red); the field north of the Bradford Road with extant permission for a slope shaft (pink) and an adjacent field (blue) also owned by the Johnston Quarry Group. The granting of permission at Rudloe Firs will free up the pink and blue fields for a new venture ... a gold mine (veritable). The 10-acre field, designated ‘Rudloe’ on the map, which has become the 88-home Dickens Gate development, saw the best part of £5 million line the pockets of a Colerne ‘farmer’; on this basis, the 15-acre pink/blue fields should see £7.5 million heading in the direction of the Johnston empire. If and when this comes about, given that the 30-acre field with the designation ‘B3109’ on the map has already ‘fallen’ to the 170-home, Redcliffe, Park Place development, Rudloe will no longer be a distinct community but at the western extremity of a west Corsham conurbation (contrary to all county and local plans) with implications for its status as part of Box Parish. 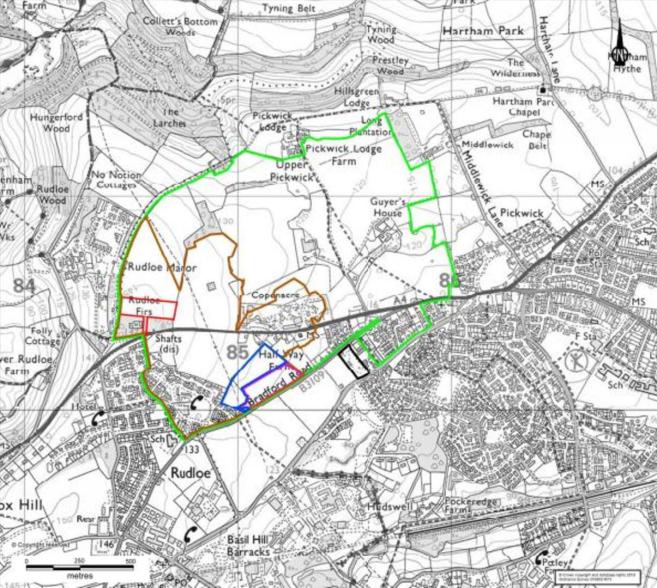 So who came to inhabit Rudloe, the precious island set in a sea of golden quarries? We will look at that in the next part – People.